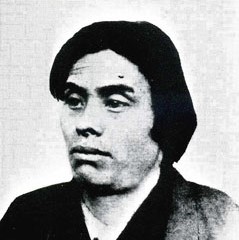 Kobayashi Kiyochika was a Japanese ukiyo-e artist, best known for his ukiyo-e colour woodblock prints and newspaper illustrations. His work documents the rapid modernization and Westernization Japanese underwent during the Meiji period (1868–1912) and employs a sense of light and shade called kōsen-ga [ja] inspired by Western art techniques.

His work first found an audience in the 1870s with prints of red-brick buildings and trains that had proliferated after the Meiji Restoration; his prints of the First Sino-Japanese War of 1894–95 were also popular. Woodblock printing fell out of favour during this period, and many collectors consider Kobayashi's work the last significant example of ukiyo-e.

Photographing Our Troops Fighting on the Streets of Niuzhuang Fortress (1895)

The Saikyô-maru in the Hard Fighting off Haiyang Island (1894)

Fukuchi Gen’ichirō, from the Series ‘Instructive Models of Lofty Ambition’ (1885)