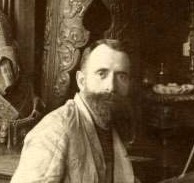 Young Girl Sleeping In A Church

The Seven Rabbis in Jerusalem

Praying before the communion at Megara (1890)

Resting by a haystack

Resting In A Greek Monastery