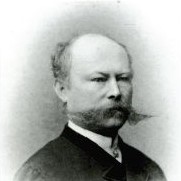 Ludvig Munthe was born at Årøy, near Sogndal in Sogn og Fjordane, Norway. He came to Bergen in 1858 where he was first instructed by Franz Wilhelm Schiertz, a German painter and architect residing in Norway. Munthe later moved to Düsseldorf where he became a pupil of Albert Flamm at the Kunstakademie Düsseldorf. He subsequently selected Düsseldorf for his permanent residence.

Munthe is associated with the Düsseldorf school of painting. A thoroughly realistic treatment characterizes his paintings, of which autumn and winter scenes in stormy or gloomy weather, forest and coast views form the prevailing subjects. He was knighted with the French Legion of Honour in 1878 and was appointed Knight of the Order of St. Olav in 1881.

Fishing Village on the Norwegian Coast (1878)