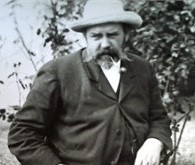 Thomas Blinks was a British Victorian artist best known for his hunting, racing and canine scenes. He was born in Maidstone, England in 1853 and apprenticed with a tailor at a young age. Eventually, against his father’s wishes, Blinks decided to pursue his talent for drawing and painting. He received no formal training but spent much of his time learning horse anatomy at Tattersalls, a local horse auction market.

His first exhibition was in 1881 at the Dudley Gallery and he exhibited regularly every year at the Royal Academy until his death in 1910. His work was celebrated immediately after his first show due to his free brush stroke and anatomical accuracy of his horses and dogs. He was especially good at conveying the pose and psychology of the working canine. He received a number of portrait commissions from upper class, prestigious members of society though his hunting scenes were what gained him his fame.

Two pointers in the heather

Mr. Edward Lycett Green and the York and Ainsty Hounds on the Ferry at Newby (1898)