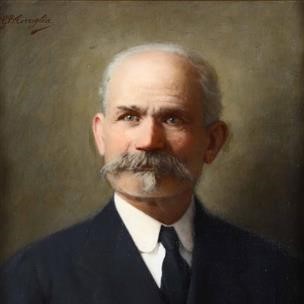 Giovanni Battista Torriglia first took his studies at the Language Academy between 1875-1882. He was the winner of the Durazzo grant in 1886. He later studied in Florence and became friendly with the artist Nicolo Barabino (1832-1891) and at that time he was concentrating very much on religious paintings.

In 1901 he settled in Tuscany for a number of years with a friend and colleague Tito Lessi (1858-1917). It was at this time that he slowly gave up painting religious and historical subjects and started on the subject of romantic interiors, depicting family life in Italy. His early subjects and his studies of figurative painting certainly stood him in very good stead for what was to become his hallmark of wonderful romantic paintings. The detail he portrayed in his paintings was second to none and his colours were alive with freshness. Each and every figure he portrayed was an individual character.

The thread of life