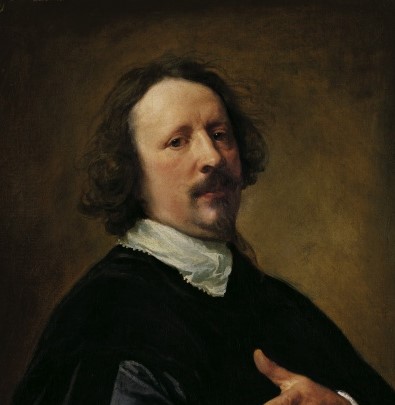 Gaspar de Crayer or Jasper de Crayer was a Flemish painter known for his many Counter-Reformation altarpieces and portraits. He was a court painter to the governors of the Southern Netherlands and worked in the principal cities of Flanders where he helped spread the Rubens style.

Gaspar de Crayer was born in Antwerp as the son of Gaspard de Crayer the Elder, a decorative painter, illuminator and art dealer. Rather than stay in Antwerp, he looked for opportunity in the capital Brussels. He is believed to have studied under Raphael Coxie, the court painter of the governors of the Spanish Netherlands Albert VII, Archduke of Austria and Isabella Clara Eugenia. He became a master in the Brussels Guild of Saint Luke in 1607. He was a dean of the Guild from 1611 to 1616 and was a member of the Brussels city council in 1626–1627. He remained in Brussels until 1664.

Gaspar de Crayer's early works include portraits of the kings of Spain and the Spanish governors and officials who were stationed in the Spanish Netherlands as well as members of the Brussels city council. For example, the Equestrian portrait of Don Diego Messia Felipe de Guzmán (Kunsthistorisches Museum, Vienna) was painted by de Crayer in 1627–1628. In addition, from the beginning of his career de Crayer received orders for altarpieces to decorate several churches and monasteries around Brussels. Not until 1635 did Cardinal-Infante Ferdinand of Austria, brother of King Philip IV of Spain and governor of the Spanish Netherlands after the death of his aunt Isabella Clara Eugenia in 1633, make him his first court painter. He later worked as a court painter for the Archduke Leopold Wilhelm of Austria who became governor in 1647.

He operated a large workshop which produced portraits of members of the leading classes in Brussels as well as a large number of altarpieces for churches in Flanders and abroad including Germany and Spain. He also received in 1647 a commission from Dutch architect Jacob van Campen to assist in the decoration of Huis ten Bosch, the palace of stadtholder Frederick Henry in The Hague. De Crayer also completed commissions for Spanish patrons, the largest of which was a commission for at least 17 images of saints, possibly destined for the Monastery of St Francis in Burgos. Another important foreign patron was the German Catholic ruler Maximilian Willibald of Waldburg-Wolfegg, for whom de Crayer executed several large altarpieces for the churches in the Palatinate between 1658 and 1666.

Even while he gained a high social position in Brussels, de Crayer did not lose contact with his hometown Antwerp. He was in particular a friend and business associate of the art dealer Matthijs Musson (c. 1600–78), who was also his patron and arranged commissions for him. He married Catharina Janssens on 17 February 1613.

He worked regularly in Ghent where he produced altarpieces and also played a leading role in the coordination of the monumental decorations for the Joyous Entry of the Cardinal-Infante in Ghent (1635). In 1664 he finally moved to this city where he spent the last five years of his life. In spite of his age, he received numerous important orders for altarpieces. He had previously established a reputation in Ghent: before 1620 he had regularly completed commissions for various religious and secular institutions of the city. The fame of Gaspar de Crayer is demonstrated by the great role that he was given in the execution of the monumental decorations for the Joyous Entry into Ghent of Cardinal-Infant Ferdinand of Austria in 1635. Among the numerous paintings made in Ghent stand out the Martyrdom of St. Blas and the works that are in the Saint Bavo's Cathedral.

In his large workshop de Crayer trained between 1610 and 1661 a large number of pupils, including presumably Jan van Cleve (III), Anselm van Hulle and François Monnaville.