The Artist died in 1422 so this work is in the public domain in its country of origin and other countries where the copyright term is the Artist's life plus 70 years or fewer. 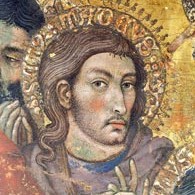 Taddeo di Bartolo, also known as Taddeo Bartoli, was an Italian painter of the Sienese School during the early Renaissance. He is among the artists profiled in Vasari's biographies of artists or Vite. Vasari claims he is the uncle of Domenico di Bartolo.

Taddeo di Bartolo was born in Siena. The exact year of his birth is unknown, but it’s been suspected to be between 1363-65. He was the son of a certain Bartolo di Maestro Mino, a barber, and not of the painter Bartolo di Fredi, as Vasari believed, and therefore not the brother of Andrea di Bartolo. Around 1389 he entered the Sienese Guild of artists, where he mastered the art of painting among his Sienese colleagues. In 1389 Taddeo traveled to Collegarli, the San Miniato al Tedesco hills, and Pisa. The painting of The Virgin and Child Enthroned, signed and dated in 1390 and created in the church of San Paolo in Pisa, is one of Taddeo’s first documented works. In 1393, Taddeo traveled to San Gimignano, where he executed the altarpiece of the Virgin and Child and Saints (1395) for the Sardi and Campigli Chapel in San Francesco. The Virgin and Child With Saints showcases Taddeo’s earlier style. The thin, elegant figures, and flowing lines of the drapery patterns reflect influence from his Sienese predecessors, such as Simone Martini and Ambrogio Lorenzetti.

From 1400-01, Taddeo worked at the Palazzo Pubblico in Siena where he created twelve small panels, of which only nine exist today, displayed at the Opera of the Duomo in Siena. These panels give reverence to Taddeo’s craftsmanship in smaller scale work, like many of his contemporaries in the trecento. Around 1401, Taddeo painted the celebrated altarpiece, Assumption of the Virgin and scenes from the Passion, in Montepulciano. The intention of this piece was for religious and devotional functions. Taddeo worked to accommodate the established conventions of altarpiece painting, while simultaneously stylizing the pieces to fit their respective site. In 1403, Taddeo produced two works in Perugia, now on display in their public gallery. The Virgin and Child with two Angels and St Bernard and Descent of the Holy Ghost. These two works showcase Taddeo’s superior talents, exhibiting delicate coloring and vast human expression; though they have been painted over throughout the years.

In 1406, Taddeo was commissioned to destroy all the paintings in the chapel of the Palazzo Pubblico, and repaint the inside. Many of these paintings represent the Life of the Madonna, including the Death of the Virgin in which Jesus descends, takes her hand, and receives her in the form of an infant. In 1422, Taddeo di Bartolo died in Siena, about age 60.