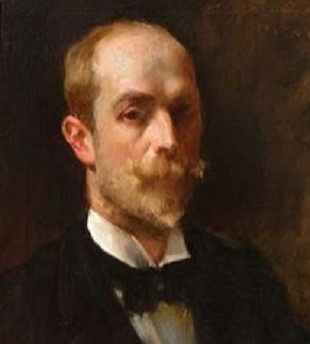 Albert Beck Wenzell was born in Detroit, Michigan, and was sent to study art first in Munich and then in Paris, where he stayed for seven years. Upon his return to America, he became the acknowledged master of fashionable society and drawing-room subjects. He was the appropriate illustrator for Edith Wharton’s House of Mirth, and a regular contributor to The Ladies’ Home Journal, Harper’s Monthly, The Century, Cosmopolitan, Associated Sunday Magazines, and The Saturday Evening Post. Wenzell was also published regularly in Die Fliegende Blätter, a German satirical journal.

His paintings were done with much “technique,” in oils or gouache. Much of his work was reproduced in black and white, although the oils were often painted and reproduced in full color. If his preoccupation with the rendering of the sheen of a silk dress or a starched shirt sometimes competes with the message of his pictures, he did, nevertheless, leave us a historic record of the settings and costumes of fashionable society at the turn of the century and set a high artistic standard.

He was awarded a Silver Medal at both the Pan-American Exposition at Buffalo in 1901, and the St. Louis Exposition in 1904.