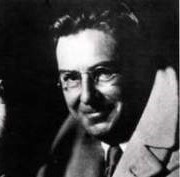 John Barton Gruelle was an American artist, political cartoonist, children's book and comics author, illustrator, and storyteller. He is best known as the creator of Raggedy Ann and Raggedy Andy dolls and as the author/illustrator of dozens of books. He also created the Beloved Belindy doll. Gruelle also contributed cartoons and illustrations to at least ten newspapers, four major news syndicates, and more than a dozen national magazines. He was the son of Hoosier Group painter Richard Gruelle.

Gruelle was born in Arcola, Illinois, on December 24, 1880, to Alice (Benton) and Richard Buckner Gruelle. In 1882, when Gruelle was two years old, he moved with his parents to Indianapolis, Indiana, and settled in a home on Tacoma Avenue in what is the present-day Lockerbie Square Historic District. The Gruelles made Indianapolis their home for more than twenty-five years.

John was the eldest child of the Gruelle family, which also included a younger sister, Prudence (1884–1966), and a brother, Justin (1889–1979). Gruelle's parents exposed all three children to music, literature, and art. John, who likely attended public schools in Indianapolis as a youth, became interested in art, and learned drawing from his father. Prudence trained as a vocalist in New York City, performed in vaudeville theaters, and married Albert Matzke, an illustrator and watercolorist. She also became an author of children's books and a syndicated newspaper columnist. Justin studied art in Indianapolis and New York City and became a landscape painter, illustrator, and muralist.

Nineteen-year-old Gruelle met his future wife, Myrtle J. Swann, in Indianapolis, where they were married on March 23, 1901. Marcella, the first of their three children, was born on August 18, 1902, and died on November 8, 1915, at age 13. The Gruelles also had two sons, Worth, who became an artist and illustrator, and Richard "Dick" Gruelle. Gruelle's widow, Myrtle (Swann) Gruelle Silsby, who remarried for a brief period in 1945, died on April 25, 1968, at the age of eighty-three.

John and Myrtle Gruelle began their married life in Indianapolis and moved with their young daughter to Cleveland, Ohio. By 1910 they had left Cleveland and moved to the Norwalk, Connecticut, area, where Gruelle's parents had acquired a 16-acre (6.5-hectare) property in Silvermine, a present-day historic district and art colony along the Silvermine River comprising sections of Norwalk, New Canaan, and Wilton, Connecticut. Gruelle and his family initially lived in a studio maintained by his father and brother on the former site of the Blanchard Fur Factory until they built a home in the Wilton section of Silvermine. Gruelle's parents, his sister and her husband, and his younger brother also made their home in the Silvermine area. After the death of their daughter, Marcella, in 1915 from an infected smallpox vaccine, John and Myrtle Gruelle moved with their two sons to Norwalk. In addition to being closer to his family, Gruelle's relocation to the East Coast provided him with additional opportunities for freelance work in newspapers and magazines as an artist and journalist.

Gruelle began his career as an illustrator and cartoonist for Indianapolis newspapers. His work was eventually syndicated nationwide. He also completed commissions for illustrations of well-known fairy tales, as well as writing and illustrating his own stories. Gruelle is best known as the creator of a series of stories about a rag doll named Raggedy Ann and her friends. He also created the iconic Raggedy Ann and Raggedy Andy dolls. In addition to becoming a successful commercial artist and illustrator, cartoonist, writer, and businessman, Gruelle was a nature-lover, storyteller, and spiritualist.

In the early years of his career Gruelle created policial cartoons and single-frame sports comics that appeared in Indianapolis newspapers such as the Indianapolis Star and the Indianapolis Daily Sentinel. In 1903 he became assistant illustrator for the Star. Within a few months his political cartoons of a top-hatted crow began to appear on the front page of the Star with witty comments for the day. Gruelle's crow figure also became the Star's weather bird and continued to appear on the newspaper's front page even after Gruelle's death in 1938. (The bird was initially named "Jim Crow," but it was renamed "Joe Crow" in the 1950s.)

From 1906 to 1911, his cartoons, usually signed as Grue, appeared in other city newspapers, such as The Toledo News-Bee, the Pittsburgh Press, the Tacoma Times, the Spokane Press, and the Cleveland Press. Gruelle's big break came in 1910–1911, when his two entries for a full-page, comic-drawing contest sponsored by the New York Herald won first and second place among the submissions from 1,500 entrants. His first-place entry, "Mr. Twee Deedle", was syndicated in weekly installments nationwide until 1918.

As Gruelle earned notoriety as a cartoonist for the Herald, he also pursued writing and illustrating his own fairy tales. His first major illustrating commission was a single-volume edition of Grimm's Fairy Tales (1914) that included Gruelle's artwork for eleven full-color plates. In other early commission work he illustrated and retold other fairy tales that included the stories of "Cinderella," "Little Red Riding Hood," and "Hansel and Gretel," among others. He also wrote and illustrated My Very Own Fairy Stories (1917), published by P. F. Volland Company, a publisher of inspirational cards, gifts, and books. Beginning with these early stories, Gruelle typically used a "fairy-story-with-a-moral format" to teach the ethical lessons that became a trademark of his work. Gruelle also created a cartoon series in 1917 called Quacky Doodles, produced as part of Bray Productions' weekly Paramount Pictograph productions.

The exact details of the origins of the Raggedy Ann doll and related stories are uncertain. Gruelle biographer Patricia Hall notes that according to an oft-repeated myth, Gruelle's daughter, Marcella, brought from her grandmother's attic a faceless rag doll on which the artist drew a face, and that Gruelle suggested that Marcella's grandmother sew a shoe button for a missing eye. Hall says the date of this supposed occurrence is given as early as 1900 and as late as 1914, with the locale variously given as suburban Indianapolis, Indiana, downtown Cleveland, Ohio, or rural Connecticut. More likely, as Gruelle's wife, Myrtle, told Hall, Gruelle retrieved a long-forgotten, homemade rag doll from the attic of his parents' Indianapolis home sometime around the turn of the 20th century, a few years before the couple's daughter was born. As Myrtle Gruelle recalled, "There was something he wanted from the attic. While he was rummaging around for it, he found an old rag doll his mother had made for his sister. He said then that the doll would make a good story." She further explained that her husband "kept [the doll] in his mind until we had Marcella. He remembered it when he saw her play [with] dolls.... He wrote the stories around some of the things she did. He used to get ideas from watching her."

In addition to the Raggedy Ann books, Gruelle continued to write and illustrate other works for children that included Friendly Stories (1919), another volume of his fairy stories. During the 1920s and 1930s he wrote and illustrated The Magical Land of Noom (1922), published by P. F. Volland Company, and the Orphant Annie Story Book (1921) and Johnny Mouse and the Wishing Stick (1922) for Indianapolis-based publisher Bobbs-Merrill Company. (Bobbs-Merrill became the authorized publisher and licensor for Raggedy Ann-related literary works in 1962.) The success of Gruelle's early books launched his career as a children's author/illustrator. While continuing to work on commissions for newspapers and magazines, he authored and illustrated at least one Raggedy Ann and Raggedy Andy story each year.

On November 27, 1929, the New York Herald Tribune Syndicate launched "Brutus," a domestic-comedy comic strip with elements of fantasy. Gruelle continued to work on this comic strip until his death in 1938.

Gruelle also wrote lyrics for musical compositions that were published as sheet music and songbooks for children. His lyrics in "Raggedy Ann's Sunny Songs" (1930) was set to music by William H. Woodin, a former U. S. Treasury Secretary. (It is likely that one of Gruelle's characters, "Little Wooden Willie," was named for the politician.) Other sheet music included "Beyond the Moon" (1931) with lyrics by Gruelle and Johnny Mercer, music by Guy Stevens; and "Beneath the Southern Skies" (1931) with lyrics by Gruelle and Joan Jasmyn, music by M. K. Jerome. Other Gruelle children's songbooks and recordings include the Richard Wolfe Children's Chorus performing on a recording of "A Raggedy Ann Songbook" (1996).

Gruelle and his wife relocated from Connecticut, to the Miami, Florida, area in 1932. In his later years Gruelle continued to write and illustrate books such as Raggedy Ann and the Golden Meadow (1935), which was completed with the assistance of his son, Worth. The father-and-son duo also collaborated on a series of illustrated Raggedy Ann proverbs that were syndicated in newspapers. In addition, Gruelle produced humorous cartoons and made public appearances, but took time away from work to pursue his hobby of collecting automobiles. Although the Great Depression of the 1930s caused some setbacks that included the bankruptcy of his primary publisher, P. F. Volland, and a lawsuit for patent and trademark infringement that he finally won on appeal in 1937, Gruelle and his family continued to experience an active life in Florida until stress took its toll on Gruelle's health.

He died unexpectedly of heart failure at his son Worth's home in Miami Springs, Florida, on January 9, 1938, two weeks after his fifty-seventh birthday. His remains are interred at Silvermine Cemetery in New Canaan, Fairfield County, Connecticut. Following Gruelle's death, his widow, Myrtle (Swann) Gruelle, took legal action to secure the rights to his works, trademarks, and patents. She also continued her efforts to promote his legacy through the Johnny Gruelle Company, the Bobbs-Merrill Company, and other commercial agreements.

In a career that spanned forty years, Gruelle was an author and/or illustrator of dozens of books and contributed cartoons and illustrations to at least ten newspapers, four major new syndicates, and more than a dozen national magazines. Despite the diversity of his work, Gruelle is best known as the illustrator, author, and the creator of the Raggedy Ann doll and related books, illustrations, and characters. By the time of his death in 1938, his first Raggedy Ann book had sold more than 3 million copies. The iconic Raggedy Ann and Raggedy Andy dolls that Gruelle designed and their related memorabilia have become sought-after collectors' items.

Kittens should have his nice soft basket (1918)

Oh Dear, Raggedy Ann and Andy and the Camel with the Wrinkled Knees (1924)