The Artist died in 1541 so this work is in the public domain in its country of origin and other countries where the copyright term is the Artist's life plus 70 years or fewer. 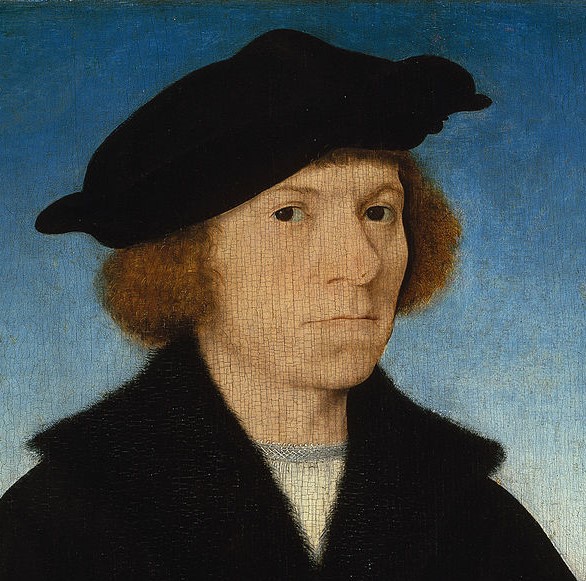 Joos van Cleve was a leading painter active in Antwerp from his arrival there around 1511 to his death in 1540 or 1541. Within Dutch and Flemish Renaissance painting, he combines the traditional techniques of Early Netherlandish painting with influences of more contemporary Renaissance painting styles.

An active member and co-deacon of the Guild of Saint Luke of Antwerp, he is known mostly for his religious works and portraits, some of royalty. He ran a large workshop, with at least five pupils and other assistants, which produced paintings in a variety of styles over his career. As a skilled technician, his art shows sensitivity to color and a unique solidarity of figures. His style is highly eclectic: he was one of the first to introduce broad world landscapes in the backgrounds of his paintings, sometimes collaborating with Joachim Patinir, which would become a popular technique of sixteenth century northern Renaissance paintings. Some works reflect the popular style of Antwerp Mannerism, while others are variations on early Netherlandish masters of two or more generations before, or reflect recent Italian painting.

Four of his more important paintings have the monogram "JB", presumably for Joos van der Beke, rather inconspicuously placed. In three other works a self-portrait is placed among the minor figures. From the seventeenth to the nineteenth centuries, the name of Joos van Cleve as an artist was lost. Some of the paintings now attributed to Joos van Cleve were, at that time, known as the works of the "Master of the Death of the Virgin", after the triptych in the Wallraf-Richartz-Museum in Cologne. In 1894 it was discovered that the monogram on the back of the triptych was that of Joos van der Beke, the real name of Joos van Cleve. His oeuvre was reconstructed in the 1920s and 1930s by Ludwig von Baldass and Max Jakob Friedländer. Now over 300 works are generally attributed to him or his workshop, which vary considerably in both quality and style.

He was the father of Cornelis van Cleve (1520-1567) who also became a painter, and inherited the workshop. Cornelis became mentally ill during a residence in England and was therefore referred to as 'Sotte Cleef' (mad Cleef).

Portrait of a bearded man