The Artist died in 1804 so this work is in the public domain in its country of origin and other countries where the copyright term is the Artist's life plus 70 years or fewer. 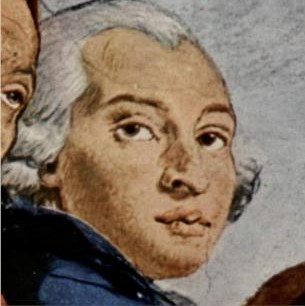 Giovanni Domenico Tiepolo was an Italian painter and printmaker in etching. He was the son of artist Giovanni Battista Tiepolo and elder brother of Lorenzo Baldissera Tiepolo.

Domenico was born in Venice, studied under his father, and by the age of 13 was the chief assistant to him. He was one of the many assistants, including Lorenzo, who transferred the designs of his father (executed in the 'oil sketch' invented by the same).
By the age of 20, he was producing his own work for commissioners. He assisted his father in Würzburg 1751-3, decorating the famous stairwell fresco, in Vicenza at the Villa Valmarana in 1757, and in Madrid at the palace of Charles III from 1762-70.

His painting style developed after the death of his father in 1770, at which time he returned to Venice, and worked there as well as in Genoa and Padua. His painting, though keeping the decorative influence of his father, moved from its spatial fancy and began to take a more realistic depiction. His portraits and scenes of life in Venice are characterised by movement, colour, and deliberate composition.

A Boar, Galloping to the Left, and a Sleeping Sow (on the Base) (mid-18th–early 19th century)

A Crowd of Persons in Antique Roman or Oriental Dress, Gathering at a Pagan Altar (ca. 1743)

Christ at Supper with Simon the Pharisee, with the Anointment of Christ’s Feet by Mary Magdalen (1785)

Creation of the Universe