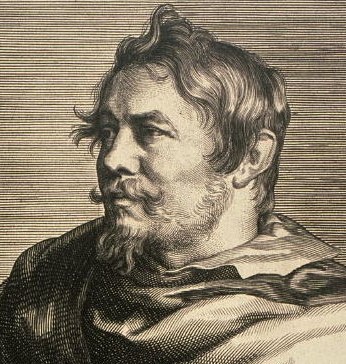 Gerard Seghers was a Flemish painter, art collector and art dealer. After a period of study and residence in Rome, he returned to Flanders where he became one of the leading representatives of the Flemish Caravaggisti movement. In his later career he abandoned the Caravaggist style and genre motifs to become an important painter of large altarpieces for local churches.

Gerard Seghers was born in Antwerp, the son of innkeeper Jan Seghers and his wife Ida de Neve. He was probably unrelated to the Jesuit still life painter Daniel Seghers. At the age of 12 he was enrolled as a pupil at the Guild of Saint Luke in Antwerp. It is not clear who his teacher was. Possibly he trained under Abraham Janssens, Hendrick van Balen or Caspar de Crayer (the father of the more famous Gaspar de Crayer).

In 1608, only aged 17, he became a master in the Antwerp Guild of St. Luke. In 1611 Seghers joined the Society of the Aged Bachelors (Sodaliteit der Bejaarde Jongmans), a fraternity for bachelors established by the Jesuit order.

He left for a trip to Italy. It is assumed that he worked there for the Antwerp art merchant Goetkint. At the same time Seghers used the experience for furthering his training as a painter and making copies after famous Italian paintings.

Gerard Seghers was in Naples around 1611 where he worked for the Spanish Viceroy. He later moved to Rome where he worked for cardinal Antonio Zapata y Cisneros and the Spanish ambassador. In Rome he encountered the followers of Caravaggio, who had himself died a few years before Seghers' arrival in Rome. One in particular, Bartolomeo Manfredi, had as significant impact on his early work. Manfredi was one of the closest followers of Caravaggio and was at the height of his fame when Seghers arrived in Rome. Seghers fell strongly under the spell of Manfredi's work. He likely also met up with the Dutch and Flemish Caravaggisti residing in Rome such as Gerard van Honthorst, Dirck van Baburen and Jan Janssens and possibly also Hendrik ter Brugghen and Theodoor Rombouts.

Cardinal Antonio Zapata y Cisneros convinced Seghers to go to Madrid. He traveled to Madrid in 1616 with Bartolomeo Cavarozzi and Giovanni Battista Crescenzi. He reportex later that in Spain he was in the service of king Philip III of Spain. However, the lack of mention of the artist in contemporary Spanish sources, casts doubt on this supposed sojourn in Spain. He was back in Antwerp in the fall of 1620 and the following year he assisted Rubens in the decoration of the Saint Carolus Borromeus church of Antwerp. In 1621 Seghers married Catharina Wouters (d.1656) who came from a respected family. The couple would have eleven children of whom one, Jan-Baptist Seghers (1624-1670), also became a painter.

In 1624 he became a consultor of the Sodality of the Married Men of Age ('Sodaliteit der getrouwden'), a fraternity of married men established by the Jesuit order. It is assumed that in the period 1624 to 1627 he visited or resided in Utrecht where he would have met the leading Carravagist Gerard van Honthorst whom he likely knew from Rome.

In Antwerp Seghers was successful as a painter and art dealer and was able to afford a house on the fashionable Meir. He was patronized by many monastic orders, including the Jesuits, who commissioned altarpieces from him. He was employed by the city authorities of both Antwerp and Ghent as one of the many artists working on the festive decorations for the Joyous Entry of Cardinal-Infante Ferdinand, the new governor of the Southern Netherlands, in 1635. Seghers' contribution to the Ghent decorations was based on a design by Rubens and was later engraved by Jacob Neefs with the title Belgica implores Charles V to let Ferdinand rule the country and published by Jan van Meurs in Antwerp in a publication on the Joyous Entry into Ghent. Seghers was appointed court painter to the Cardinal-Infante on 25 June 1637. It is possible that in the 1640s he spent some time in Amsterdam. Seghers' work found an eager market abroad, in particular in Spain, thanks to the strong political links between Spain and Flanders as well as Seghers' personal connections with important Spanish personalities such as cardinal Antonio Zapata y Cisneros whom Seghers had become acquainted with during his stay in Rome.

He had many pupils including his son Jan Baptist Seghers, Peter Franchoys, Frans Lucas Peters (I), Pieter Verbeeck (II) and Thomas Willeboirts Bosschaert.

Saint Theresa of Ávila in Ecstasy

Feast of the Gods in a Cave near the Sea Shore

The Holy Family With The Infant Saint John The Baptist

Saint Theresa of Ávila in Ecstasy

Feast of the Gods in a Cave near the Sea Shore