Abraham Mignon or Minjon, was a still life painter. He is known for his flower pieces, still lifes with fruit, still lifes in forests or grottoes, still lifes of game and fish as well as his garland paintings. His works are influenced by those of Jan Davidszoon de Heem and Jacob Marrel.

After commencing his artistic training in his native Germany, he moved to the Dutch Republic where he was active in Utrecht during the last part of his short life. His works were sought after by 17th and 18th-century collectors from the highest ranks of society throughout Europe.

Mignon was born in Frankfurt where he was baptized in the Calvinist church on 21 June 1640. His family was originally from Hainaut in the Southern Netherlands from where it had immigrated to Germany for religious reasons. In Frankfurt they owned a shop.

When Abraham's family moved to Wetzlar in 1649, Abraham was placed in the care of Jacob Marrel, a specialist flower painter and art dealer. Marrel gave the young boy also artistic training. He clearly trusted Mignon to handle his business, as he would leave it in Mignon's hands during his frequent visits to the Dutch Republic and in particular, Utrecht. It was also Marrell who asked Mignon to train his live-in stepdaughter Maria Sibylla Merian (1647–1717) in the art of still-life painting. Maria Sibylla Merian was the daughter of the engraver Matthew Merian (1647–1717). Maria Sibylla Merian achieved distinction as a flower painter.

It is possible that in 1660 Mignon had moved to Wetzlar where the rest of his family had moved. Other sources state that by 1659 Marrell and Mignon had left Frankfurt for Utrecht. It is possible that the death of Mignon's father around this time prompted the relocation to Utrecht. In 1669 Marrel and Mignon were both registered in the Guild of Saint Luke there. Mignon was an assistant in the workshop of Jan Davidszoon de Heem in Utrecht. Jan Davidszoon de Heem was an important innovator of still life painting who had worked for many years in Antwerp before returning to Utrecht in 1667. It is possible that after de Heem moved back to Antwerp in 1672 Mignon took over de Heem's workshop.

Throughout his life Mignon seems to have held on to the strict religious beliefs of his family. This is confirmed by his election in 1672 to the position of deacon of the Waalse Kerk (Walloon Church) of Utrecht, a position he remained in for five years. He married Maria Willaerts on 3 February 1675 in the French reformed Janskerk in Utrecht. His wife was the granddaughter of the marine painter Adam Willaerts, daughter of the painter Cornelis Willaerts and niece of the fish still life painter Jacob Gillig. Some sources state that Mignon moved back to his native Frankfurt in 1676 based on a record that seems to imply that his 6th child was baptized in Frankfurt on 17 December 1676. By 1677 he would then have moved back to Utrecht.

Mignon died in Utrecht at the age of 39. He left two daughters when he died, Catharina and Anna.

Besides Maria Sibylla Merian, another known pupil of Mignon was Ernst Stuven. 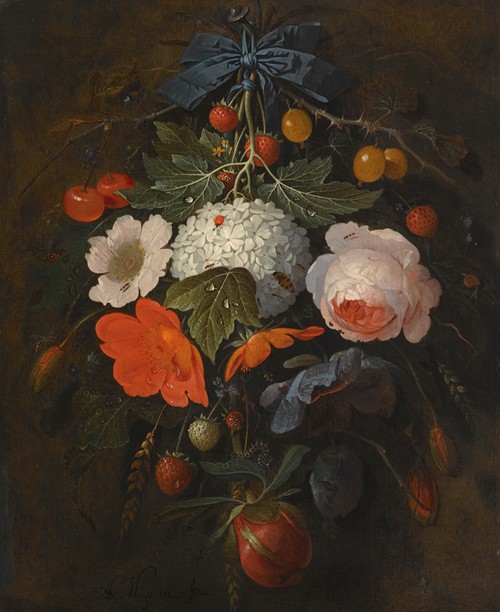 A Festoon Of Flowers And Fruit, Including A Pink Rose, A Poppy, A Snowball, Gooseberries And Fraises De Bois, Along With A Variety Of Insects 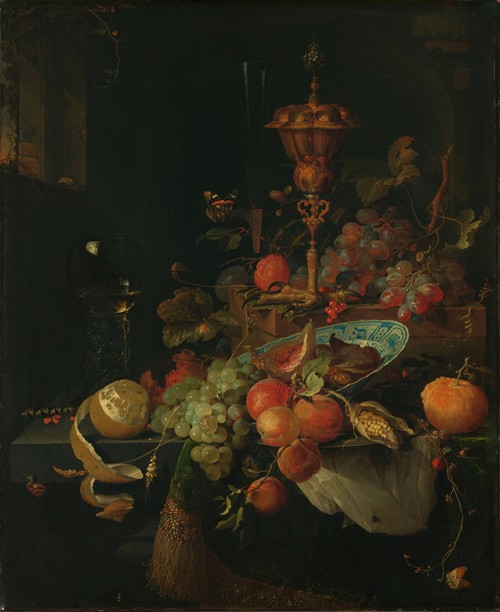 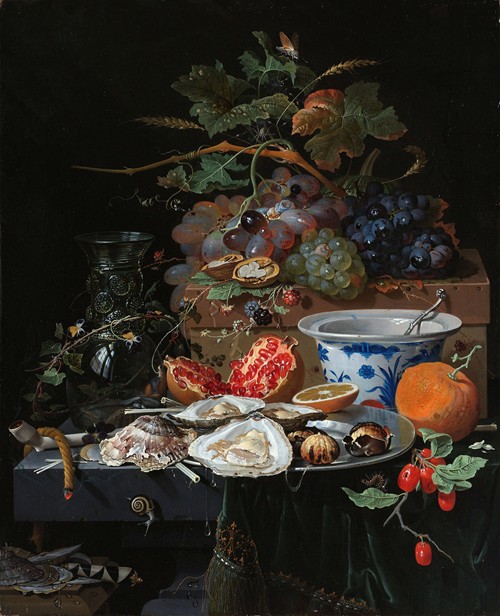 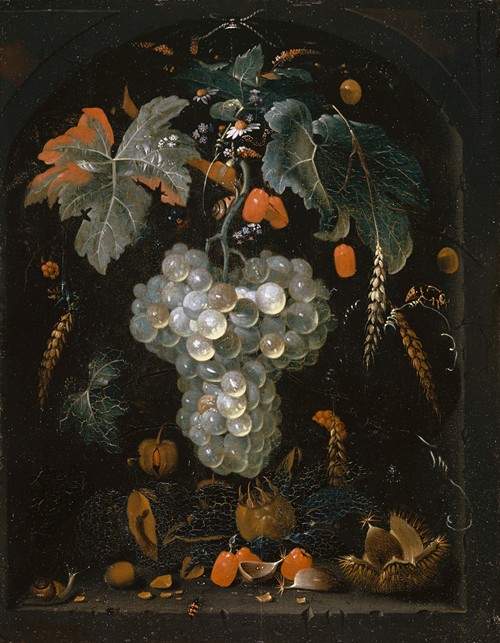 Still-Life With Grapes And Fruits In A Niche 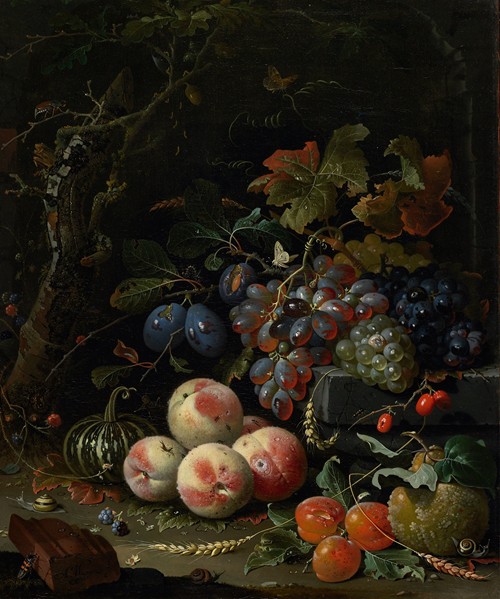 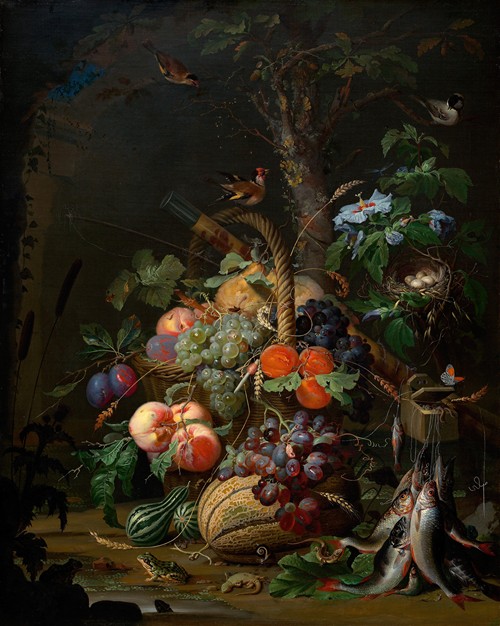 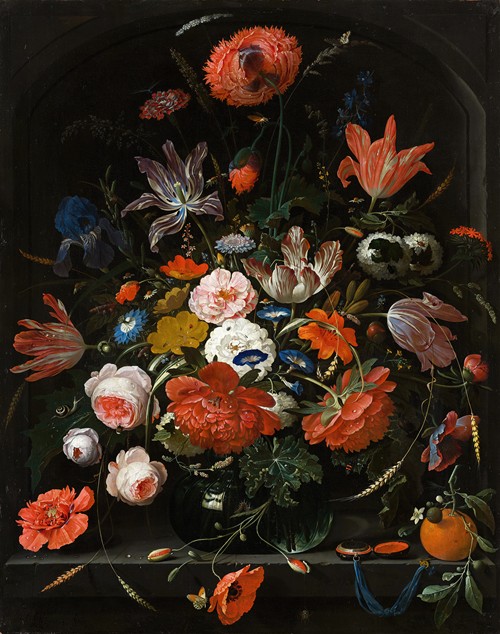 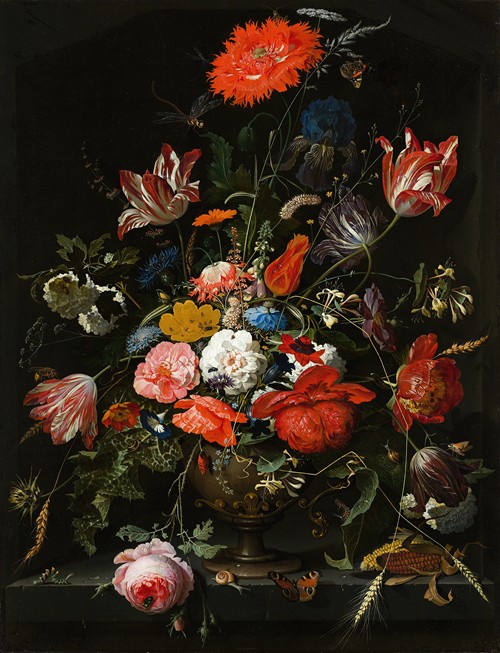 A Festoon Of Flowers And Fruit, Including A Pink Rose, A Poppy, A Snowball, Gooseberries And Fraises De Bois, Along With A Variety Of Insects

Still-Life With Grapes And Fruits In A Niche