Shepherd and Flock Crossing a River in the Mountains (1914) 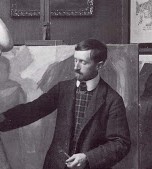 Carl Nathanael Burckhardt was a Swiss painter and sculptor. Although a modernist, his choice of subject matter was Neoclassically inspired.

After his father's early death, his family moved to Basel. He began his studies in 1896, as a student of the painter, Fritz Schider, then attended a private school operated by Heinrich Knirr in Munich. In 1899, he took a trip to Rome with his friend, Heinrich Altherr, drew his interests toward sculpting. In 1901, he started work on his first sculpture, featuring Zeus and Eros. He then came under the influence of Max Klinger and created a statue of Venus in 1904. Five years later, he won a competition for the design of niche figures and façade reliefs at the Kunsthaus Zürich. The reliefs featured Amazon figures that were cut by his assistant, Louis Léon Weber [de] in 1912.

From 1913 until his death, he was an active member of the Basler Kunstverein [de]. One of his best known works is an Amazon leading a horse, on the Mittlere Brücke. It is also his last work. The casting was done after his death. Other public works in Basel include the portal relief at the Pauluskirche and a bronze statue of St. George slaying the dragon; which was awarded first prize in a competition held by the Kunstkredit Basel-Stadt [de], to design a figure for a stairway in the Kohlenberg District.

He was married to the painter, Sophie Hipp, younger sister of the painter Johanna Hipp [de]. Their son was the religious scholar, Titus Burckhardt. He died after a brief illness at his home in Ticino.

Landscape With A Group Of Bacchantes (1911)

Amazons And Hunters At The Seaside

Landscape With A Group Of Bacchantes (1911)

Amazons And Hunters At The Seaside