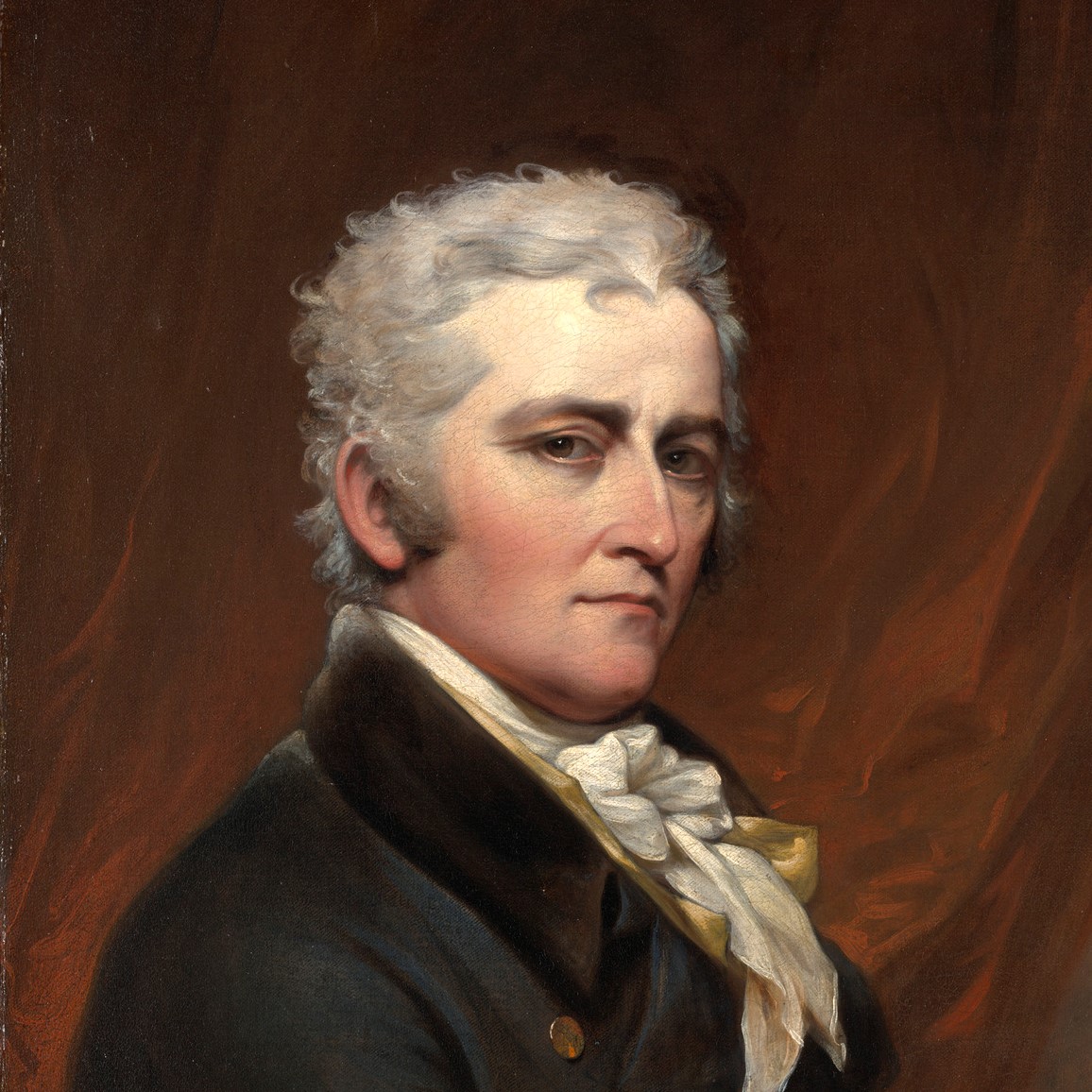 John Trumbull was an American artist of the early independence period, notable for his historical paintings of the American Revolutionary War, of which he was a veteran. He has been called "The Painter of the Revolution".

Trumbull's Declaration of Independence (1817), one of his four paintings which hang in the United States Capitol Rotunda, is used on the reverse of the current United States two-dollar bill.

Trumbull was born in Lebanon, Connecticut, in 1756, to Jonathan Trumbull and Faith (née Robinson) Trumbull. His father served as Governor of Connecticut from 1769 to 1784. Both sides of his family were descended from early Puritan settlers in the state.

He had two older brothers, Joseph Trumbull, the first commissary general of the Continental Army in the Revolutionary War, and Jonathan Trumbull Jr., who would become the second Speaker of the House of the United States.

The young Trumbull entered the 1771 junior class at Harvard College at age fifteen and graduated in 1773. Due to a childhood accident, Trumbull lost the use of one eye. This may have influenced his detailed painting style.

As a soldier in the American Revolutionary War, Trumbull rendered a particular service at Boston by sketching plans of the British and American lines and works. He witnessed the Battle of Bunker Hill. He was appointed second aide-de-camp to General George Washington, and in June 1776, deputy adjutant-general to General Horatio Gates. He resigned from the army in 1777 after a dispute over the dating of his officer commission.

In 1780, with funds depleted, Trumbull turned to art as a profession. He traveled to London, where upon introduction from Benjamin Franklin, Trumbull studied under Benjamin West. At West's suggestion, Trumbull painted small pictures of the War of Independence and miniature portraits. He painted about 250 in his lifetime. He also painted a portrait of Washington from memory during this time.

On September 23, 1780, British agent Major John André was captured by Continental troops in North America; he was hanged as a spy on October 2, 1780. After news reached Great Britain, outrage flared and Trumbull was arrested for high treason, as he was an officer in the Continental Army of similar rank to André. He was imprisoned for seven months in London's Tothill Fields Bridewell.

After being released, Trumbull returned to the United States on a voyage that lasted six months, ending in late January 1782. He then joined his brother David in supplying the army stationed at New Windsor, New York during the winter of 1782–83.

In 1784, following Britain's recognition of the United States' independence, Trumbull returned to London for painting study under West. His first major work, The Deputation from the Senate Presenting to Cincinnatus the Command of the Roman Armies, was accepted and displayed by the Royal Academy of Arts in that year. In this work, Trumbull had painted Lucius Quinctius Cincinnatus in the likeness of George Washington. The painting is now unlocated. While working in his studio, Trumbull painted Battle of Bunker Hill and Death of General Montgomery in the Attack on Quebec. Both works are now in the Yale University Art Gallery.

In July 1786, Trumbull went to Paris, where he made portrait sketches of French officers for the Surrender of Lord Cornwallis. With the assistance of Thomas Jefferson, serving there as the American minister to France, Trumbull began the early composition of the Declaration of Independence. Over the next 5 years Trumbull painted small portraits of the signers, which he would later use to piece together the larger painting. If the signer was deceased, a previous portrait would be copied, as was the case with Arthur Middleton, whose head position stands out in the painting. While visiting with each signer or their family, Trumbull, always looking for funding, used the occasion to sell subscriptions to engravings that would be produced from his paintings of the American Revolution.

While in Paris, Trumbull is credited with having introduced Jefferson to the Italian painter Maria Cosway; they became lifelong intimate friends. Trumbull's painting of Jefferson, commissioned by Cosway, became widely known due to a later engraving of it by Asher Brown Durand, which was reproduced.

Trumbull's Declaration of Independence painting was purchased by the United States Congress, along with his Surrender of General Burgoyne, Surrender of Lord Cornwallis, and General George Washington Resigning His Commission, all related to the Revolution. All now hang in rotunda of the United States Capitol. Congress reportedly authorized only funds sufficient to purchase these four paintings.

Trumbull's portraits also include full lengths of General Washington (1790) and George Clinton (1791), now held in New York City Hall. New York City Hall also hangs Trumbull's portrait of Mayor Richard Varick, who commissioned the 1790 portrait of Washington. New York also bought his full-length paintings of Alexander Hamilton (1805, the source of the face on the $10 bill) and John Jay. Trumbull was elected a Fellow of the American Academy of Arts and Sciences in 1791 and elected as a member of the American Philosophical Society in 1792.

He painted portraits of John Adams (1797), Jonathan Trumbull, and Rufus King (1800); Timothy Dwight and Stephen Van Rensselaer (both at Yale), Alexander Hamilton (one in the Metropolitan Museum of Art and one in the Boston Museum of Fine Arts, both taken from Ceracchi's bust), a self-portrait (1833), a full-length of Washington, held at Charleston, South Carolina; a full-length of Washington in uniform, General George Washington at Trenton, (1792, at Yale); and portraits of President and Mrs. Washington (1794), in the National Museum of American History.

Trumbull himself was painted by Gilbert Stuart and many others.

In 1794 Trumbull acted as secretary to John Jay in London during the negotiation of the treaty with Great Britain, which largely settled the boundary with Canada and began cotton export to the country. In 1796 he was appointed by the commissioners sent by the two countries as the fifth member of a commission charged with carrying out the seventh article of the Jay Treaty, which mediated claims by American and British merchants and the opposing government stemming from actions which occurred during the war. Shortly after the end of Trumbull's service on this commission, he traveled to Stuttgart to pick up the completed engraving of the Battle of Bunker's Hill. On the return trip he passed through Paris and carried the first dispatch from the XYZ Affair out of France.

Trumbull would later encounter hard times during which he was failing to sell his paintings individually. In 1831, he sold a series of 28 paintings and 60 miniature portraits to Yale University for an annuity of $1,000. After many years of trying to create income from his paintings, he had finally found a way to sustain himself from his art. This is by far the largest single collection of his works. The collection was originally housed in a neoclassical art gallery designed by Trumbull on Yale's Old Campus, along with portraits by other artists.

Trumbull was appointed president of the American Academy of the Fine Arts in New York City, serving for twenty years, from 1816 to 1836. Emphasizing classical traditions, Trumbull did not get along with the students. At the same time, his painting skills declined. In 1825 many of the students withdrew, founding the National Academy of Design. Unable to accommodate to changing tastes, the American Academy later closed in 1839 after a second fire destroyed its collections.