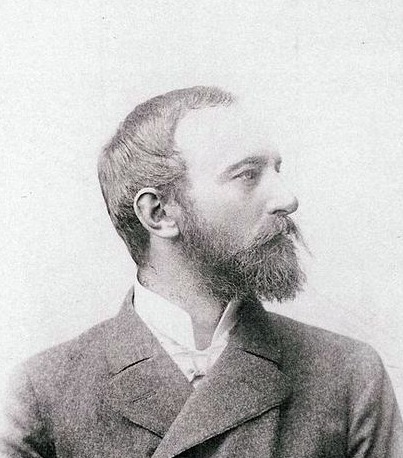 Alphons Leopold Mielich was an Austrian painter noted for his orientalist scenes. He participated in a team responsible for documenting the frescoes in an Umayyad castle at Qasr Amra, including the famous Painting of the Six Kings and provided the illustrations for a published book on the findings, Kusejr 'Amra, published in 1907.

Alphons Leopold Mielichhofer was born in Klosterneuburg, near Vienna on 27 January 1863. He received his art education in Paris, London and Munich. He served as a lieutenant of artillery in the Austrian Army until 1887 when his military career ended prematurely due to ill health.
In 1889, he travelled to the Middle East as part of his convalescence, and remained there for several years. He returned to Egypt another eleven times before the outbreak of war in 1914. His visits to the Middle-East became vitally important to his career since most of his work concerns Orientalist themes.

On his 1901 voyage to the Middle East, he accompanied Czech scholar Alois Musil to work on the documentation of the Umayyad castle at Qasyr 'Amra, then in the Ottoman Empire (modern-day Jordan). His brief was to document the paintings and frescoes in the ancient castle by copying them faithfully. Almost as soon as they had arrived, they were attacked by local rebels who stole all their camels. Sometime later, they realised that the attack had been a misunderstanding and their camels were returned. However, before that, the pair had resolved to remain on site on account of the paintings' immense historical interest which Mielich had noted. The partnership between Musil and Mielich resulted in the publication of a two-volume work, Kusejr 'Amra, in which Mielich's drawings took up the second volume.

In 1910, Mielich's work was featured in the exhibition, Meisterwerke Muhammedanischer Kunst, [Masterpieces of Muhammedan Art], in Munich, a mammoth and unprecedented exhibition of exotic art featuring some 3,600 artworks from more than 250 collections. Mielich regularly exhibited in Vienna, Paris, London, as well as in various German and Russian cities. From 1894, he was a member of the Viennese artist group "Wiener Kuenstlerhaus".

Fellahin, Motif on the Road to Giza near Cairo