Portrait Of A Seated Woman 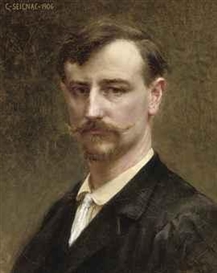 Guillaum Seignac (1870–1924) was a French academic painter.
Guillaume was born in Rennes in 1870, and died in Paris in 1924. He started training at the Académie Julian in Paris, where he spent 1889 through 1895. He had many teachers there, including Gabriel Ferrier, William-Adolphe Bouguereau, and Tony Robert-Fleury.
In addition to his training in the academic style, much of Seignac's work displayed classical themes and style, for example, his use of diaphanous drapery covering a woman's body is reminiscent of classical style, in particular the sculptor Phidias. In 1897, Guillaume Seignac regularly exhibited at the Salon and won several honors, including in 1900 honorable mention and in 1903 a Third Class medal.

A Beauty Of Nature