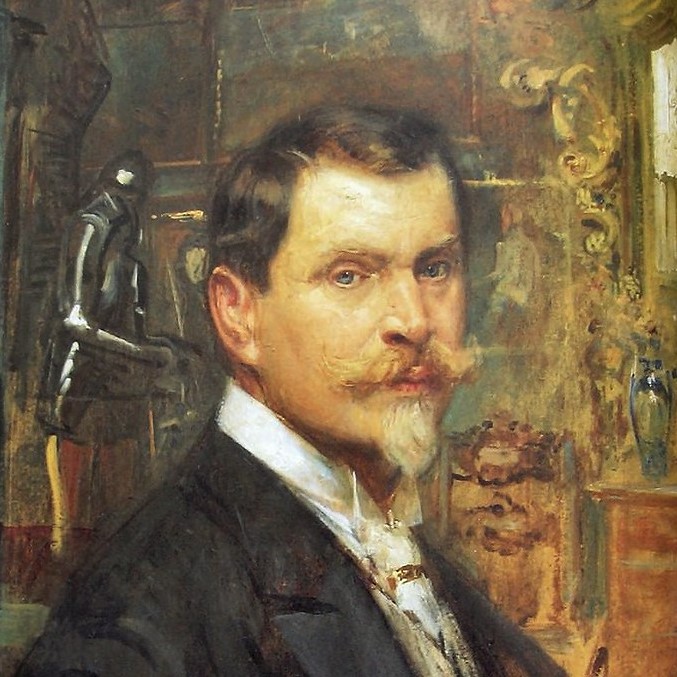 Eduard Veith was an Austrian portrait painter and stage designer. Many of his works were influenced by Symbolism.

He was born to the decorative painter, Julius Veith (1820–1887), and his wife Susanna, née Schleif (1827–1883). At first, he received training to follow in his father's profession. Later, he went to Vienna, where he took classes at the Museum of Applied Arts from Professor Ferdinand Laufberger. He capped off his studies by creating sgraffito for exhibition buildings at the Exposition Universelle in Paris.

He then returned home, where he assisted his father with painting churches, synagogues and other ceremonial buildings.This was followed by several study trips; to Italy, Belgium and Tunisia. He finally settled in Vienna; becoming a free-lance artist and working mostly by commission.

From 1890, he was a member of the Vienna Künstlerhaus. In 1896, he received a gold medal at the Große Berliner Kunstausstellung. In 1905, he was appointed a Professor at the University of Technology. In 1911, he married Bertha Griesbeck (1872-1952), from Augsburg. He later taught at the University of Applied Arts Museum of Applied Arts, and became a Professor there in 1920. During his years in Vienna, he maintained contact with his home town, and held exhibitions there.

In addition to his paintings, he did interior decorations for a number of the buildings on the Ringstraße, and trompe l'oeil stage sets. He often collaborated with the architects, Fellner & Helmer, who built dozens of theatres and opera houses throughout the Austro-Hungarian Empire.

He died shortly before his sixty-seventh birthday, and was interred at Döbling Cemetery. His grave is adorned with a sculpture by Georg Leisek.

Portrait of a Young Woman in a Red Dress

Portrait of His Wife Berta (The Visit)