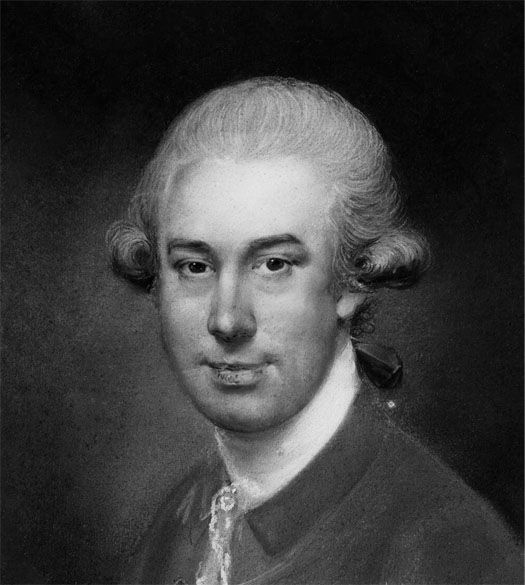 John Russell was an English painter renowned for his portrait work in oils and pastels, and as a writer and teacher of painting techniques.

Russell was born in Guildford, Surrey, the son of John Russell Snr., book and print seller and four times mayor of the town; his father was something of an artist, and drew and published two views of Guildford. Russell was educated at the Royal Grammar School, Guildford, and soon showed a strong inclination for art. He trained under Francis Cotes RA (of Cavendish Square, London), one of the pioneers of English pastel painting, and, like Cotes, was an admirer of the pastel drawings of Rosalba Carriera whose methods influenced his technique of "sweetening". At the age of 19 he converted to Methodism, which was the cause of tension with his family and with his teacher; he made no secret of his strong evangelical leanings and would attempt to preach and convert at every opportunity.

Russell set up his own studio, in London, in 1767. He made the acquaintance of the notorious Dr. William Dodd, whose portrait he painted in 1768. He was introduced to Selina, Countess of Huntingdon, who unsuccessfully attempted to persuade him to give up painting and attend her Methodist ministers' training college at Trevecca in Wales. On 5 February 1770, he married Hannah Faden, daughter of a Charing Cross print and map seller, whom he had converted. They lived at No. 7 Mortimer Street, Cavendish Square, where he had moved in 1770.

Russell's work caused him to travel extensively around Britain. In 1772, he wrote Elements of Painting with Crayons, by which time he had won premiums for his drawings from the Society of Arts in 1759 and 1760, and entered the Royal Academy school of art in 1770, winning its gold medal for figure drawing the same year. He exhibited at the Society of Artists of Great Britain in 1768 and showed 330 works at the Academy between 1769 until and his death.

In 1770, Russell painted Methodist minister, George Whitefield (engraved by James Watson) and the future philanthropist, William Wilberforce, then only eleven years old. In 1771, he exhibited a portrait in oils of Charles Wesley at the Royal Academy and, in 1772, painted Selina, Countess of Huntingdon in pastel. This was a symbolic picture, and was lost on its voyage out; but it was engraved, and he later also painted her in oils. Also in that year he was elected an associate of the Royal Academy. The following year, 1773, he painted John Wesley (engraved by Bland).

In 1788, after a long wait, Russell was elected a royal academician, in the same year painting a portrait of the naturalist Sir Joseph Banks. In 1789, he was commissioned to portray the royal physician Francis Willis. The results obviously pleased the monarch as, in 1790, he was appointed Crayon (pastel) Painter to King George III, Queen Charlotte, the Prince of Wales (both of whom Russell also painted) and the Duke of York. With such royal patronage, he developed a large and fashionable clientele.

Russell was a man of deep religious beliefs, a devout follower of George Whitefield. He began an elaborate introspective diary in John Byrom's shorthand in 1766 and continued it to the time of his death. In it, he recorded his own mental condition and religious exercises, and occasionally information concerning his sitters. Though his religion appears to have become less militant after his marriage, his diary bears witness to his anxiety with regard to his spiritual welfare. Not only would he not work on Sunday, but he would allow no one to enter his painting-room. He was afraid to go out to dinner on account of the loose and blasphemous conversation which he might hear. He was on good terms with Sir Joshua Reynolds, with whom he dined at the academy, the Dilettanti Society, and the Literary Club (now The Club), but he records that on these or other festive occasions he always left early.

He was troubled by ill-health for much of his life, and in 1803 became almost deaf following a bout of cholera. He died in Hull in 1806 after contracting typhus.