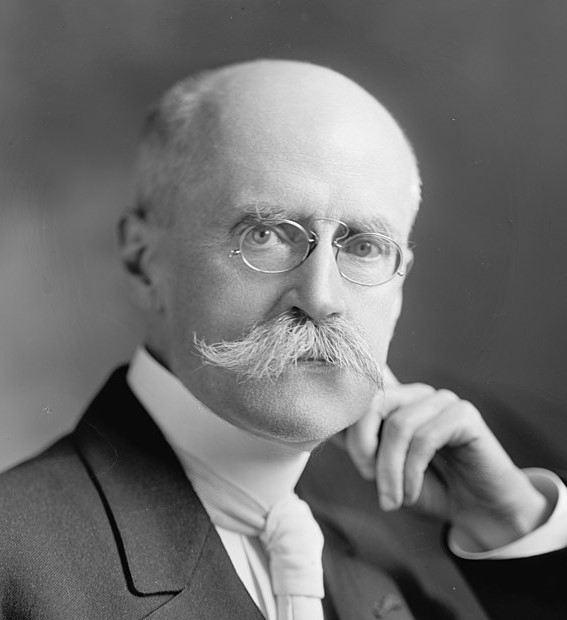 Edwin Howland Blashfield was an American painter and muralist, most known for painting the murals on the dome of the Library of Congress Main Reading Room in Washington, DC.

Blashfield was born in Brooklyn in 1848 to William H. Blashfield and Eliza Dodd.

He studied painting at the Pennsylvania Academy of the Fine Arts after initial coursework in engineering at the Massachusetts Institute of Technology. He moved to Europe in 1867 to study with Léon Joseph Florentin Bonnat in Paris and remained abroad until 1881, traveling, painting, and exhibiting his work in salon shows. His academic background in painting and extensive travels in Italy to study fresco painting melded in work marked by delicacy and beauty of coloring. Following his early success as a genre painter, Blashfield became a widely admired muralist whose work ornamented the dome of the Manufacturers' and Liberal Arts building at the World's Columbian Exposition of 1893, in Chicago, several state capitols, and the central dome of the Library of Congress.

He was a member of numerous arts organizations, including the National Academy of Design, the National Society of Mural Painters in which he served as President from 1909 to 1914. American Academy of Arts and Letters, and the National Institute of Arts and Letters. Blashfield served from 1920 to 1926 as President of the National Academy of Design. Among his many honors, Blashfield was awarded a Gold Medal by the National Academy of Design in 1934, an honorary membership in the American Institute of Architects, and an honorary doctorate of fine arts by New York University in 1926. He served on the U.S. Commission of Fine Arts from 1912 to 1916. His circle of friends included sculptor Daniel Chester French, painters John Singer Sargent and Maxfield Parrish, and architect Cass Gilbert. His style was influenced by Pierre Puvis de Chavannes, Jean-Paul Laurens, and Paul Baudry. He married Evangeline Wilbour in 1881 and together they wrote Italian Cities (1900) and translated Vasari's Lives of the Painters (4 vols., 1897). Wilbour died in 1918 and Blashfield married Grace Hall in 1928. He became president of the Society of Mural Painters, and of the Society of American Artists. Blashfield died in 1936 at his summer home on Cape Cod and is interred at Woodlawn Cemetery in The Bronx, New York City.

Emblem of France and Great Britain (1917)