The Artist died in 1553 so this work is in the public domain in its country of origin and other countries where the copyright term is the Artist's life plus 70 years or fewer. 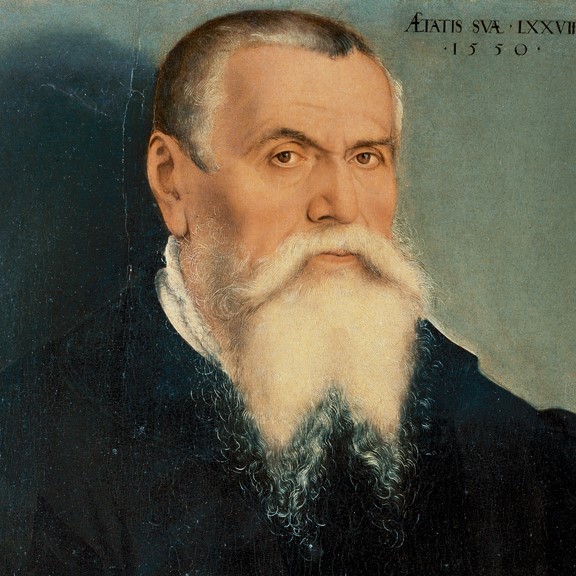 Lucas Cranach the Elder was a German Renaissance painter and printmaker in woodcut and engraving. He was court painter to the Electors of Saxony for most of his career, and is known for his portraits, both of German princes and those of the leaders of the Protestant Reformation, whose cause he embraced with enthusiasm. He was a close friend of Martin Luther. Cranach also painted religious subjects, first in the Catholic tradition, and later trying to find new ways of conveying Lutheran religious concerns in art. He continued throughout his career to paint nude subjects drawn from mythology and religion.

Cranach had a large workshop and many of his works exist in different versions; his son Lucas Cranach the Younger and others continued to create versions of his father's works for decades after his death. He has been considered the most successful German artist of his time.

He was born at Kronach in upper Franconia (now central Germany), probably in 1472. His exact date of birth is unknown. He learned the art of drawing from his father Hans Maler (his surname meaning "painter" and denoting his profession, not his ancestry, after the manner of the time and class). His mother, with surname Hübner, died in 1491. Later, the name of his birthplace was used for his surname, another custom of the times. How Cranach was trained is not known, but it was probably with local south German masters, as with his contemporary Matthias Grünewald, who worked at Bamberg and Aschaffenburg (Bamberg is the capital of the diocese in which Kronach lies). There are also suggestions that Cranach spent some time in Vienna around 1500.

From 1504 to 1520 he lived in a house on the south west corner of the marketplace in Wittenberg.

According to Gunderam (the tutor of Cranach's children), Cranach demonstrated his talents as a painter before the close of the 15th century. His work then drew the attention of Duke Frederick III, Elector of Saxony, known as Frederick the Wise, who attached Cranach to his court in 1504. The records of Wittenberg confirm Gunderam's statement to this extent: that Cranach's name appears for the first time in the public accounts on the 24 June 1504, when he drew 50 gulden for the salary of half a year, as pictor ducalis ("the duke's painter"). Cranach was to remain in the service of the Elector and his successors for the rest of his life, although he was able to undertake other work.

Cranach married Barbara Brengbier, the daughter of a burgher of Gotha and also born there; she died at Wittenberg on 26 December 1540. Cranach later owned a house at Gotha, but most likely he got to know Barbara near Wittenberg, where her family also owned a house, which later also belonged to Cranach.

The first evidence of Cranach's skill as an artist comes in a picture dated 1504. Early in his career he was active in several branches of his profession: sometimes a decorative painter, more frequently producing portraits and altarpieces, woodcuts, engravings, and designing the coins for the electorate.

Early in the days of his official employment he startled his master's courtiers by the realism with which he painted still life, game and antlers on the walls of the country palaces at Coburg and Locha; his pictures of deer and wild boar were considered striking, and the duke fostered his passion for this form of art by taking him out to the hunting field, where he sketched "his grace" running the stag, or Duke John sticking a boar.

Before 1508 he had painted several altar-pieces for the Castle Church at Wittenberg in competition with Albrecht Dürer, Hans Burgkmair and others; the duke and his brother John were portrayed in various attitudes and a number of his best woodcuts and copper-plates were published.

In 1509 Cranach went to the Netherlands, and painted the Emperor Maximilian and the boy who afterwards became Emperor Charles V. Until 1508 Cranach signed his works with his initials. In that year the elector gave him the winged snake as an emblem, or Kleinod, which superseded the initials on his pictures after that date.

Cranach was the court painter to the electors of Saxony in Wittenberg, an area in the heart of the emerging Protestant faith. His patrons were powerful supporters of Martin Luther, and Cranach used his art as a symbol of the new faith. Cranach made numerous portraits of Luther, and provided woodcut illustrations for Luther's German translation of the Bible. Somewhat later the duke conferred on him the monopoly of the sale of medicines at Wittenberg, and a printer's patent with exclusive privileges as to copyright in Bibles. Cranach's presses were used by Martin Luther. His apothecary shop was open for centuries, and was only lost by fire in 1871.

Cranach, like his patron, was friendly with the Protestant Reformers at a very early stage; yet it is difficult to fix the time of his first meeting with Martin Luther. The oldest reference to Cranach in Luther's correspondence dates from 1520. In a letter written from Worms in 1521, Luther calls him his "gossip", warmly alluding to his "Gevatterin", the artist's wife. Cranach first made an engraving of Luther in 1520, when Luther was an Augustinian friar; five years later, Luther renounced his religious vows, and Cranach was present as a witness at the betrothal festival of Luther and Katharina von Bora. He was also godfather to their first child, Johannes "Hans" Luther, born 1526. In 1530 Luther lived at the citadel of Veste Coburg under the protection of the Duke of Saxe-Coburg and his room is preserved there along with a painting of him. The Dukes became noted collectors of Cranach's work, some of which remains in the family collection at Callenberg Castle.

The death in 1525 of the Elector Frederick the Wise and Elector John's in 1532 brought no change in Cranach's position; he remained a favourite with John Frederick I, under whom he twice (1531 and 1540) filled the office of burgomaster of Wittenberg. In 1547, John Frederick was taken prisoner at the Battle of Mühlberg, and Wittenberg was besieged. As Cranach wrote from his house to the grand-master Albert, Duke of Prussia at Königsberg to tell him of John Frederick's capture, he showed his attachment by saying,

I cannot conceal from your Grace that we have been robbed of our dear prince, who from his youth upwards has been a true prince to us, but God will help him out of prison, for the Kaiser is bold enough to revive the Papacy, which God will certainly not allow.

During the siege Charles V, the Holy Roman Emperor, remembered Cranach from his childhood and summoned him to his camp at Pistritz. Cranach came, and begged on his knees for kind treatment for Elector John Frederick.

Three years afterward, when all the dignitaries of the Empire met at Augsburg to receive commands from the emperor, and Titian came at Charles's bidding to paint King Philip II of Spain, John Frederick asked Cranach to visit the city; and here for a few months he stayed in the household of the captive elector, whom he afterward accompanied home in 1552.

He died at age 81 on October 16, 1553, at Weimar, where the house in which he lived still stands in the marketplace. He was buried in the Jacobsfriedhof in Weimar.

Mary Salome and Zebedaeus with their sons St. James the Greater and St. John the Evangelist (1509)