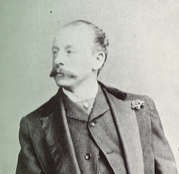 On the Meadows of Old Newburyport (1873)

Punt on a River