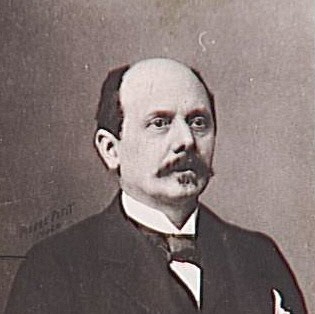 Pierre-Georges Jeanniot was a Swiss-French Impressionist painter, designer, watercolorist, and engraver who was born in Geneva, Switzerland, and died in France. His work often depicts the modern life in Paris.

The artistic education of Pierre-Georges Jeanniot began with his father, Pierre-Alexandre Jeanniot (1826–1892), a longtime director of l'École des Beaux-Arts of Dijon, France.

Pierre-Georges Jeanniot started out pursuing a military career, as an infantry officer (1866–1881). He was a lieutenant with the Twenty-third Infantry from 1868 to 1870. He fought in the Franco-Prussian War, was wounded at Rezonville, and was awarded the Légion d'Honneur. He subsequently served with the Ninety-fourth Infantry and the Seventy-third Infantry. At the time he left the army he held the rank of major, with the Chasseurs à Pieds.

In 1881, after the army offered him the rank of commandant, he resigned to devote himself exclusively to painting. He took up residence in Paris. His works from this period represent mainly scenes of military life that allowed him to forge a reputation. Jeanniot established himself permanently in 1882 and obtained his first award the following year (medal third class of the Salon de Paris) with his les Flanqueurs (1883, Musée du Luxembourg). In 1886, La ligne de feu, souvenirs de la bataille de Rezonville, remembering the Battle of Mars-La-Tour (Museum of Pau), assured his notoriety.

From then on, he started to show a certain artistic independence. He then mostly portrayed Parisian women during the "Belle Epoque", women in bathing suits on the beaches (a new phenomenon in those times) or scenes on the race course. These paintings give us a vivid sociological portrayal of his times. But as soon as the Société Nationale des Beaux-Arts was founded in 1899, he rallied to their new painting trend.

In Paris, he secured himself friendships and memories of Édouard Manet, Pierre Puvis de Chavannes, Jean-Louis Carnival, Paul Helleu, and especially with Edgar Degas, whom he revered as a master. He spent much time with Edgar Degas in his family home in Diénay (Côte-d'Or).

He was gifted with many talents and also excelled with his drawings. He showed in his drawings his passion and his artistic strength. They are vivacious, expressive and enthusiastic, while at the same time, rendering with a sense of humour the picturesque scenes of daily life. During the next decades he illustrated a large number of literary books, among them Le Voyage à Saint-Cloud, Germinie Lacerteux (1886), Contes choisis" (Guy de Maupassant, 1886), Tartarin de Tarascon (Daudet, 1887), "Les Liaisons dangereuses" (Pierre Choderlos de Laclos, 1917). He was also one of the illustrators of Les Misérables (Victor Hugo, 1887), La Débâcle et La Curée (Émile Zola, 1893–1894), Le Calvaire (Octave Mirbeau, 1901), Le Misanthrope (Molière, 1907), Les Paysans (Honoré de Balzac, 1911), and Candide (Voltaire) and many more.

He was one of the first collaborators (together with Théodore de Banville, Alphonse Daudet and Giuseppe De Nittis) of the review La Vie Moderne and also contributed to the review La Lutte Moderne. In a later stage he became the director of Journal amusant, while also offering contributions to Rire and L'Écho de Paris.

As an engraver, he also sketches ironic scenes from the daily life depicting in lively traits the snobs of Paris. His talents suggest a resemblance to the works of Toulouse-Lautrec and Mary Cassatt. At the same time he also used the woodcut printing technique allowing vivid contrasts between dark and bright parts of the image.

His works can be found in many museums, though most are situated in France (Alais, Nancy, Paris, Carnavalet, Pau, Toul and Toulouse), but some in other countries (Oslo, New York, Buenos Aires).

The Devastation of Suresnes (1871)