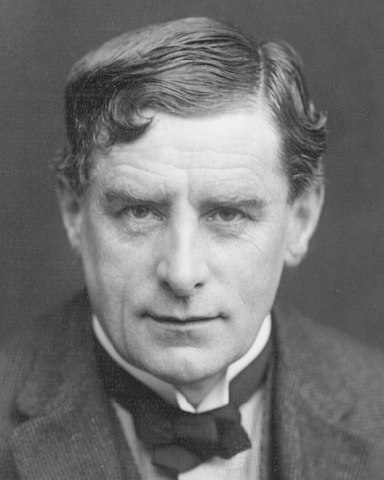 Walter Richard Sickert was a British painter and printmaker who was a member of the Camden Town Group of Post-Impressionist artists in early 20th-century London. He was an important influence on distinctively British styles of avant-garde art in the mid- and late 20th century.

Sickert was a cosmopolitan and eccentric who often favoured ordinary people and urban scenes as his subjects. His work includes portraits of well-known personalities and images derived from press photographs. He is considered a prominent figure in the transition from Impressionism to Modernism.

Sickert was born in Munich, Germany, on 31 May 1860, the eldest son of Oswald Sickert, a Danish-German artist, and his wife, Eleanor Louisa Henry, who was an illegitimate daughter of the British astronomer Richard Sheepshanks. In 1868, following the German annexation of Schleswig-Holstein, the family settled in Britain, where Oswald's work had been recommended by Freiherrin Rebecca von Kreusser to Ralph Nicholson Wornum, who was Keeper of the National Gallery at the time. The family obtained British nationality. The young Sickert was sent to University College School from 1870 to 1871, before transferring to King's College School, where he studied until the age of 18. Though he was the son and grandson of painters, he first sought a career as an actor; he appeared in small parts in Sir Henry Irving's company, before taking up the study of art in 1881. After less than a year's attendance at the Slade School, Sickert left to become a pupil of and etching assistant to James Abbott McNeill Whistler. Sickert's earliest paintings were small tonal studies painted alla prima from nature after Whistler's example.

In 1883 he travelled to Paris and met Edgar Degas, whose use of pictorial space and emphasis on drawing would have a powerful effect on Sickert's work. He developed a personal version of Impressionism, favouring sombre colouration. Following Degas' advice, Sickert painted in the studio, working from drawings and memory as an escape from "the tyranny of nature". In 1888 Sickert joined the New English Art Club, a group of French-influenced realist artists. Sickert's first major works, dating from the late 1880s, were portrayals of scenes in London music halls. One of the two paintings he exhibited at the NEAC in April 1888, Katie Lawrence at Gatti's, which portrayed a well known music hall singer of the era, incited controversy "more heated than any other surrounding an English painting in the late 19th century". Sickert's rendering was denounced as ugly and vulgar, and his choice of subject matter was deplored as too tawdry for art, as female performers were popularly viewed as morally akin to prostitutes. The painting announced what would be Sickert's recurring interest in sexually provocative themes.

In the late 1880s he spent much of his time in France, especially in Dieppe, which he first visited in mid-1885, and where his mistress, and possibly his illegitimate son, lived. During this period Sickert began writing art criticism for various publications, including Herbert Vivian and Stuart Richard Erskine's "The Whirlwind". Between 1894 and 1904 Sickert made a series of visits to Venice, initially focusing on the city's topography; it was during his last painting trip in 1903–04 that, forced indoors by inclement weather, he developed a distinctive approach to the multiple-figure tableau that he further explored on his return to Britain. The models for many of the Venetian paintings are believed to have been prostitutes, whom Sickert might have known through being a client.

Sickert's fascination with urban culture accounted for his acquisition of studios in working-class sections of London, first in Cumberland Market in the 1890s, then in Camden Town in 1905. The latter location provided an event that would secure Sickert's prominence in the realist movement in Britain. On 11 September 1907, Emily Dimmock, a prostitute cheating on her partner, was murdered in her home at Agar Grove (then St Paul's Road), Camden. After sexual intercourse the man had slit her throat open while she was asleep, then left in the morning. The Camden Town murder became an ongoing source of prurient sensationalism in the press. For several years Sickert had already been painting lugubrious female nudes on beds, and continued to do so, deliberately challenging the conventional approach to life painting—"The modern flood of representations of vacuous images dignified by the name of 'the nude' represents an artistic and intellectual bankruptcy"—giving four of them, which included a male figure, the title The Camden Town Murder, and causing a controversy which ensured attention for his work. These paintings do not show violence, however, but a sad thoughtfulness, explained by the fact that three of them were originally exhibited with completely different titles, one more appropriately being What Shall We Do for the Rent?, and the first in the series, Summer Afternoon.

While the painterly handling of the works inspired comparison to Impressionism, and the emotional tone suggested a narrative more akin to genre painting, specifically Degas's Interior, the documentary realism of the Camden Town paintings was without precedent in British art. These and other works were painted in heavy impasto and narrow tonal range. Sickert's best-known work, Ennui (c. 1913), reveals his interest in Victorian narrative genres. The composition, which exists in at least five painted versions and was also made into an etching, depicts a couple in a dingy interior gazing abstractedly into empty space, as though they can no longer communicate with each other.

Just before the First World War he championed the avant-garde artists Lucien Pissarro, Jacob Epstein, Augustus John and Wyndham Lewis. At the same time Sickert founded, with other artists, the Camden Town Group of British painters, named from the district of London in which he lived. This group had been meeting informally since 1905, but was officially established in 1911. It was influenced by Post-Impressionism and Expressionism, but concentrated on scenes of often drab suburban life; Sickert himself said he preferred the kitchen to the drawing room as a scene for paintings.

From 1908 to 1912, and again from 1915 to 1918, he was an influential teacher at Westminster School of Art, where David Bomberg, Wendela Boreel, Mary Godwin and John Doman Turner were among his students. He founded a private art school, Rowlandson House, in the Hampstead Road in 1910. It lasted until 1914; for most of that period its co-principal and chief financial supporter was the painter Sylvia Gosse, a former student of Sickert. He also briefly set up an art school in Manchester where his students included Harry Rutherford.

After the death of his second wife in 1920, Sickert relocated to Dieppe, where he painted scenes of casinos and café life until his return to London in 1922. In 1924, he was elected an Associate of the Royal Academy (ARA).

In 1926 he suffered an illness, thought to have been a minor stroke. In 1927, he abandoned his first name in favour of his middle name, and thereafter chose to be known as Richard Sickert. His style and subject matter also changed: Sickert stopped drawing, and instead painted from snapshots usually taken by his third wife, Thérèse Lessore, or from news photographs. The photographs were squared up for enlargement and transferred to canvas, with their pencil grids plainly visible in the finished paintings.

Seen by many of his contemporaries as evidence of the artist's decline, Sickert's late works are also his most forward-looking, and prefigure the practices of Chuck Close and Gerhard Richter. Other paintings from Sickert's late period were adapted from illustrations by Victorian artists such as Georgie Bowers and John Gilbert. Sickert, separating these illustrations from their original context and painting them in poster-like colours so that the narrative and spatial intelligibility partly dissolved, called the resulting works his "English Echoes".

Sickert painted an informal portrait of Winston Churchill in about 1927. Churchill's wife Clementine introduced him to Sickert, who had been a friend of her family. The two men got along so well that Churchill, whose hobby was painting, wrote to his wife that "He is really giving me a new lease of life as a painter."

Sickert tutored and mentored students of the East London Group, and exhibited alongside them at The Lefevre Gallery in November 1929.

Sickert made his last etching in 1929.

Sickert was President of the Royal Society of British Artists from 1928 to 1930. He became a Royal Academician (RA) in March 1934 but resigned from the Academy on 9 May 1935 in protest against the president's refusal to support the preservation of Jacob Epstein's sculptural reliefs on the British Medical Association building in the Strand. In the last decade of his life, he depended increasingly on assistants, especially his wife, for the execution of his paintings.

One of Sickert's closest friends and supporters was newspaper baron Lord Beaverbrook, who accumulated the largest single collection of Sickert paintings in the world. This collection, with a private correspondence between Sickert and Beaverbook, is in the Beaverbrook Art Gallery in Fredericton, New Brunswick, Canada. In addition to having painted Beaverbrook, Sickert painted portraits of notables including Gwen Ffrangcon-Davies, Hugh Walpole, Valentine Browne, 6th Earl of Kenmare, and less formal depictions of Aubrey Beardsley, King George V, and Peggy Ashcroft.

Sickert died in Bath, Somerset in 1942, at the age of 81. He had spent much time in the city in his later years, and many of his paintings depict Bath's varied street scenes. He had been married three times: from 1885 until their divorce in 1899 to Ellen Cobden, a daughter of Richard Cobden; from 1911 until her death in 1920 to Christine Angus; and from 1926 until his death to the painter Thérèse Lessore. He is buried in the churchyard of the Church of St Nicholas, Bathampton.

Sickert's sister was Helena Swanwick, a feminist and pacifist active in the women's suffrage movement.

The two lags (after John Gilbert)