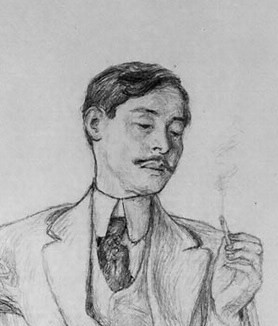 He was born in Matsuyama City, Ehime Prefecture in 1876. He graduated from the Japanese-style painting department of Tokyo School of Art, which is the present Tokyo University of the Arts, in 1901.

After he graduated from the school, he became a designer and worked for the Osaka Sanwa print shop, assuming the position of design chief. However, because the company's design department closed the next year, he left the shop.

He went to Shimane as a junior high school teacher in 1904, then went to Tokyo again the following year and began working for the Tokyo Chuo Shinbun. In 1908 he became a non-regular employee designer in the Mitsukoshi dry goods shop, taking charge of the cover of Mitsukoshi Times. He became the store's design chief in 1910 and so he left the newspaper company. The magazine Mitsukoshi began to be published in 1911. He became the lecturer of the design department of Nihon Bijutsu Gakko (Japan School of Art) and became the adviser to Calpis Co., a beverage manufacturer, in 1921.

He went to Europe to study modern graphic design from 1922 to 1924. Having returned to Japan, he formed "Hichininsha," a group to study posters, in 1925. He designed the poster of the Tokyo Metro Ginza Line opening to traffic in 1927. It can be said that his works during this period led the early stages of Japanese commercial design.

His wife is Sugiura Suiko (1885-1960) who was a poet of the Araragi faction. She was influenced by Kitahara Hakushu.