Emil Jakob Schindler was an Austrian landscape painter. His eldest daughter was the author and composer, Alma Mahler.
He was born to a family of cotton spinning-mill operators that had been established in Fischamend, a village south of Vienna, since the 17th century. His father, Julius Jakob Schindler (1814–1846), died of lung cancer when Emil was only four years old. His mother, Maria Anna (née Penz, 1816-1886) soon afterwards took him to Pressburg (Bratislava). Three years later, on 10 February 1849, she married Second Lieutenant (later Captain), Mathias Eduard Nepalleck (1815–1873), who served in the local 2nd Hungarian Infantry Regiment. This may have been a forced marriage because, one month after the wedding, she gave birth to a daughter, Alexandrine Nepalleck (3 March 1849–4 September 1932).

Little is known about Schindler's early life. He probably began school in 1848, took piano lessons, and prepared for a military career. He did, in fact, join the army in 1857, and may have taken part in the Battle of Solferino. Not long after, however, he left the army and, in 1860, entered the Academy of Fine Arts, Vienna, where he studied with Albert Zimmermann. He found his inspiration, however, in the Dutch Masters such as Meindert Hobbema and Jacob Izaaksoon van Ruisdael. In 1873, he travelled to Venice and Dalmatia; a trip sponsored by the industrialist Friedrich Franz von Leitenberger (1837–1899). Later, he visited France and Holland.

In the spring of 1864, barely twenty-two years old, he exhibited publicly in Vienna for the first time, and sold his first painting, "Eine Waldschmiede" (A Forest Blacksmith) for 350 Gulden. After moving about, in 1867 he was able to find a permanent home in Landstraße, where he was registered as an "Historienmaler" (History painter). Two years later, he relocated to Wieden, where many artists lived, including one of Schindler's favorites, Hans Makart. When his step-father died, he took a larger apartment where his mother and half-sister soon joined him.

Schindler often took part in the evening feasts held at the Vienna Künstlerhaus. This prompted him to take singing lessons with Gustav Geiringer (1856–1945), a pianist and voice teacher. Later, he studied with Adele Passy-Cornet, a former opera soprano who had opened her own singing school in Mariahilf. This gave him the confidence to perform publicly and was briefly a member of a popular quartet led by Karl Udel [de].

During this time, he took on Tina Blau as a student and, from 1875 to 1876, they shared a studio. A burgeoning personal relationship apparently led to a quarrel and she left. The following year, however, he was preparing an amateur performance of Lenardo and Blandine, an opera by Franz Mögele (1834-1907) when his half-sister Alexandrine, who had the leading role, was suddenly taken ill and Schindler asked Passy-Cornet to find a stand-in. She presented him to one of her new pupils, a twenty-year old German girl, Anna Sofie Bergen (1857-1938). Anna was accepted and, while working with Schindler, they fell in love. In 1878, their engagement was announced in the Viennese daily Fremden-Blatt [de].

They were married in 1879 and, a month later, appeared together for the first and last time in another work by Mögele, the operetta Ritter Toggenburg. In August of that year, Anna gave birth to Alma Magaretha Maria, who would later become famous as Alma Mahler. A second daughter, Margaretha Julie (Grete), was born a year later. She led a less fortunate life and, in 1942, died at a mental hospital in Großschweidnitz.

In 1881, he was awarded the Reichel-Preis [de] which came with a cash award of 1,500 Gulden, enabling the family to rent a large new apartment that was previously occupied by Passy-Cornet, who had moved to Budapest. Winning the prize also served to attract more clients and their financial condition continued to improve. From 1885 onwards, he rented the Castle Plankenberg, near Neulengbach, where he spent his summers and established an artists' colony. He had several students there, including Marie Egner, his former studio mate Tina Blau, Olga Wisinger-Florian and Luise Begas-Parmentier. Two years later (1887), he received a commission from Rudolf, Crown Prince of Austria to sketch the coastal scenery in Dalmatia and on the island of Corfu, as part of a grand project called The Austro-Hungarian Monarchy in Word and Picture. That same year, he became an honorary member of the Vienna Academy. In 1888, the Munich Academy followed suit.

His death is generally attributed to appendicitis, which he had left untreated for too long while on vacation. However, his death certificate, as published in the Wiener Zeitung, gives the cause as paralytic ileus. His family and Moll were present at his death bed. He is buried in the churchyard of Ober Sankt Veit in Hietzing. 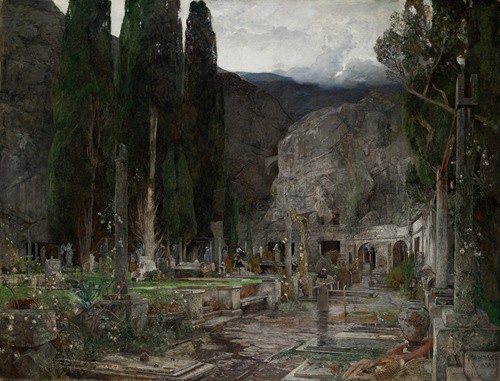 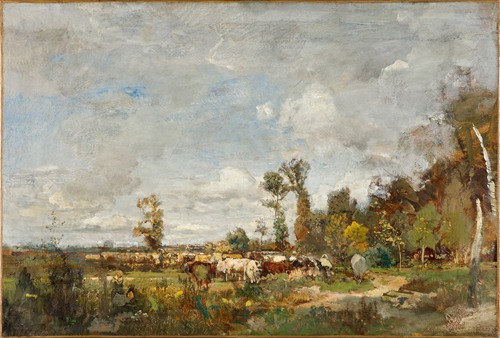 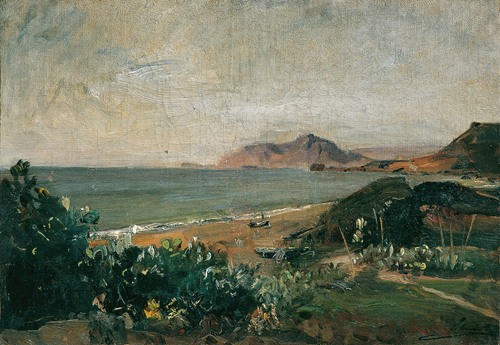 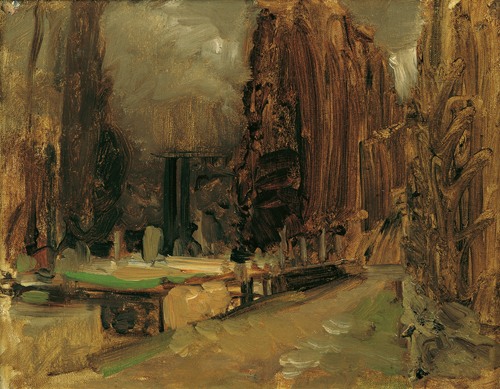 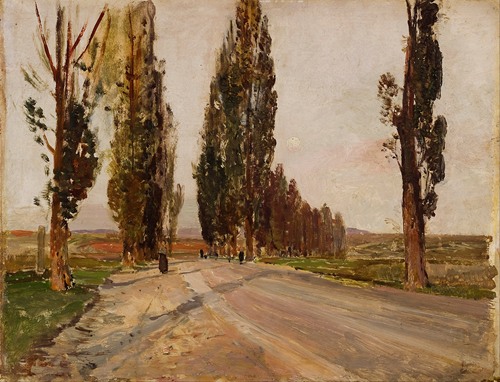 Boulevard of Poplars near Plankenberg 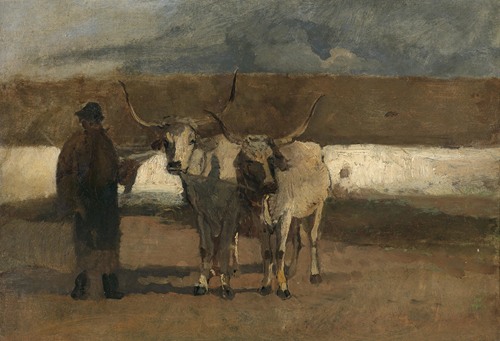 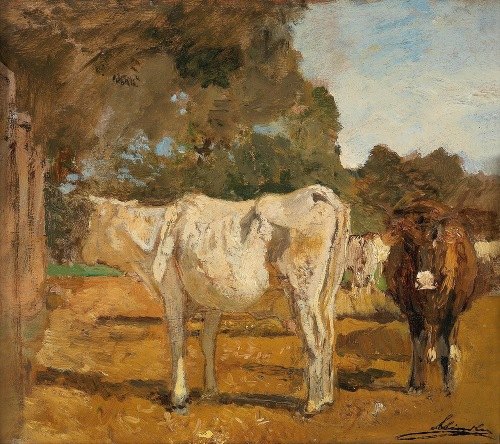 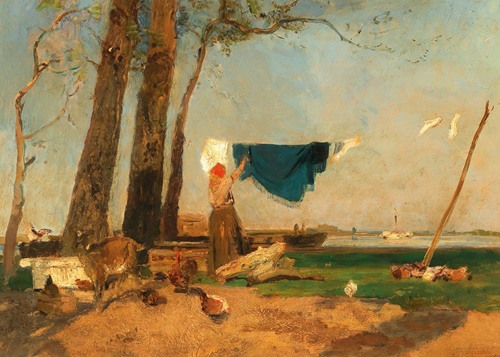 A washerwoman on the Danube bank, near the Praterspitz (c. 1868)

Boulevard of Poplars near Plankenberg