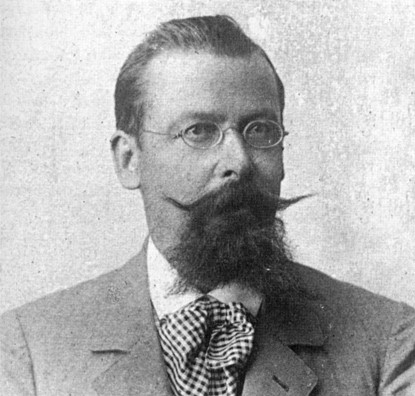 Émil August Goeldi (var. Göldi, var. Emílio Augusto Goeldi), was a Swiss-Brazilian naturalist and zoologist. He was the father of Oswaldo Goeldi, a noted Brazilian engraver and illustrator.

Goeldi studied zoology in Jena, Germany with Ernst Haeckel, and in 1884 he was invited by Ladislau de Souza Mello Netto, the influential director of the Brazilian Museu Imperial e Nacional, to work at that institution. Goeldi arrived in Rio de Janeiro in 1885 to work in the National Museum (now the Museu Nacional do Rio de Janeiro. In May 1890, he was fired, due to political circumstances related to the proclamation of the republic and the exile of his principal benefactor, Emperor D. Pedro II.

He was then invited by the governor of the state of Pará, Lauro Sodré, to reorganize the Pará Museum of Natural History and Ethnography, in Belém, which had been founded in 1866 by Domingos Soares Ferreira Penna. He arrived on 9 June 1894 in Belém. In his pioneering work, Goeldi was helped by several other foreign researchers, such as the Swiss botanist Jacques Huber (1867–1914), zoologist Emilie Snethlage (1868–1929), geologists Friedrich Katzer (1861–1925), and Alexander Karl von Kraatz-Koschlau (1867–1900), and Adolpho Ducke (1876–1959), entomologist, ethnographer and botanist.

In 1902, the Museu Paraense de História Natural e Ethnography was renamed in his honour. It is now called the Museu Paraense Emílio Goeldi. In 1905 Émil Goeldi renounced his post, due to ill health, and returned to Switzerland where he died in Bern, in 1917, at age 58. Hüber, then Snethlage and Ducke succeeded him as general directors of the Goeldi Museum in Belém.