The Artist died in 1695 so this work is in the public domain in its country of origin and other countries where the copyright term is the Artist's life plus 70 years or fewer. 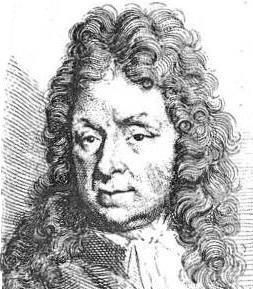 Being the grandson of the painter Gillis d'Hondecoeter and the son of Gijsbert d'Hondecoeter, whose sister Josina married Jan Baptist Weenix, he was brought up in an artistic milieu. Melchior's cousin Jan Weenix told Arnold Houbraken that in his youth Melchior was extremely religious, praying very loud, so that his mother and uncle doubted whether they would have him trained as a painter or a minister.

In 1659, he was working in The Hague and became a member of Confrerie Pictura, the painters' academy of that town. In 1663, Hondecoeter married Susanne Tradel from Amsterdam. She lived on the Lauriergracht, and was thirty when they married. The couple had two children, baptized in 1666 and 1668. She is said to have been captious, and had her sisters living in the house. According to Houbraken, Hondecoeter spent much time in his garden or drinking in the tavern in the Jordaan. On the Lauriergracht he was surrounded by art dealers and various painters. Later he moved to a house on the Leliegracht (near the present Anne Frank House). In 1692, his wife died. Hondecoeter lived in the house of his daughter Isabel in the Warmoesstraat, but was buried in the Westerkerk. He left his daughter with substantial debts. His inventory lists a small gallows, to keep birds in the right position, and seven paintings of Frans Snyders.

Hondecoeter began his career with a different speciality from that by which he is usually known. Mr de Stuers affirms that he produced sea-pieces. One of his earliest works is Tub with Fish, dated 1655, in the Herzog Anton Ulrich Museum. Hondecoeter soon abandoned fish for fowl. He acquired celebrity as a painter of birds only, which he represented not exclusively, like Johannes Fyt, as the gamekeeper's perquisite after a day's shooting, or stock of a poulterer's shop, but as living beings with passions, joys, fears and quarrels, to which naturalists will tell us that birds are subject. Without the brilliant tone and high finish of Fyt, the latter's Dutch rival's birds are full of action; and, as Burger says, "Hondecoeter displays the maternity of the hen with as much tenderness and feeling as Raphael the maternity of Madonnas." But Fyt, a pupil of Snyder, was at home in depicting the coat of deer and dons as well as plumage. Hondecoeter cultivated a narrower field, and seldom went beyond a cock-fight or a display of mere bird life.

Very few of his pictures are dated, around twenty of them, though more are signed. Notable are Jackdaw deprived of his Borrowed Plumes (1671), at the Mauritshuis in The Hague, of which Earl Cadogan has an authentic copy; Game and Poultry and A Spaniel hunting a Partridge (1672), in the Royal Museums of Fine Arts of Belgium; A Park with Poultry (1686) at the Hermitage of St Petersburg.

Hondecoeter also painted wall hangings with views of buildings and parks. Stadtholder William III employed Hondecoeter, in great favour with the magnates of the Dutch Republic, to paint his menagerie at Het Loo, and the picture, now at The Hague museum, shows that he could at a pinch overcome the difficulty of representing India's cattle, elephants and gazelles. But he is better in homelier works, with which he adorned the royal castles of Bensberg and Oranienstein at different periods of his life. His earliest works are more conscientious, lighter and more transparent than his later ones. At all times he is bold of touch and sure of eye, giving the motion of birds with great spirit and accuracy. 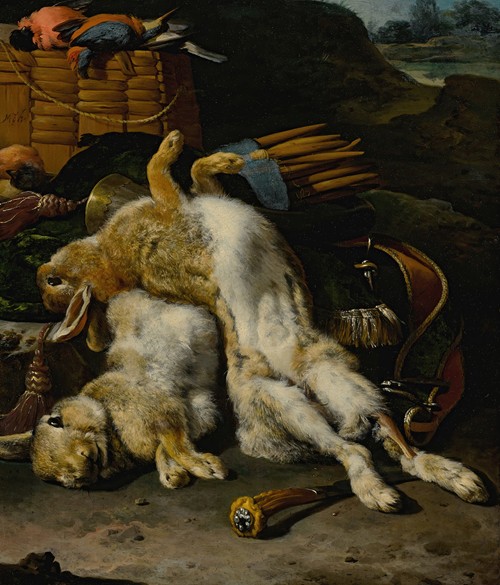 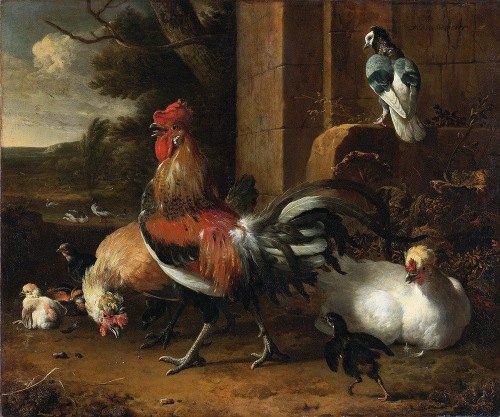 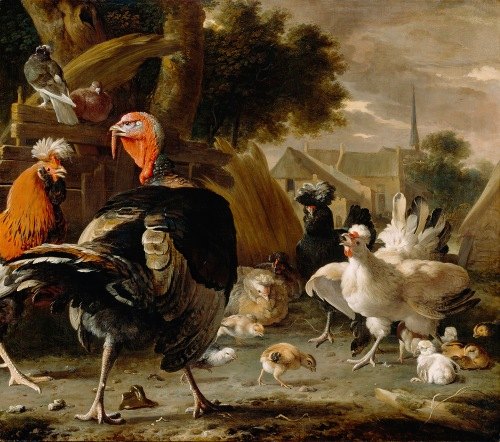 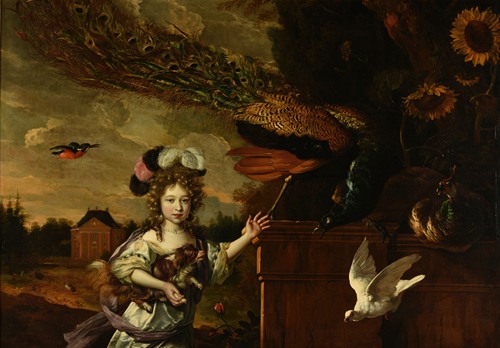 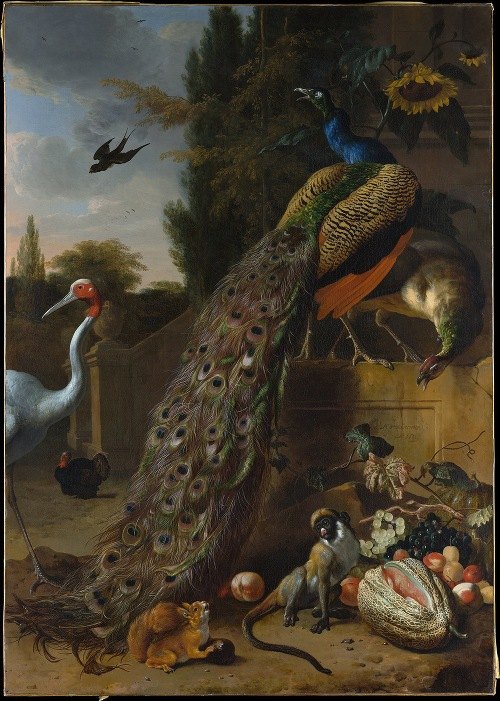 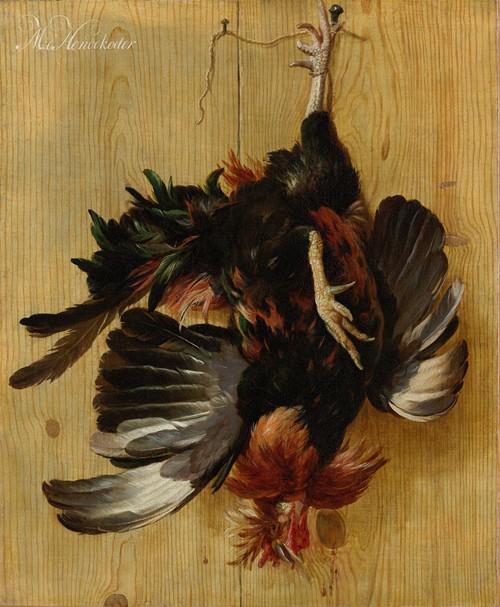 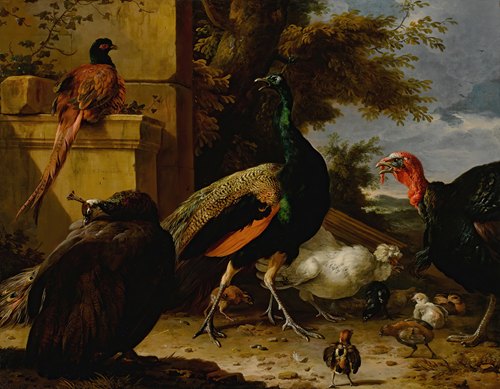 A peacock, pea-hen, pheasant, turkey, cockerel and chick by a wall, a landscape beyond 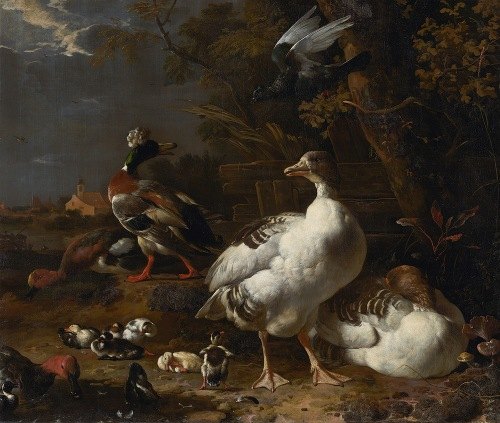