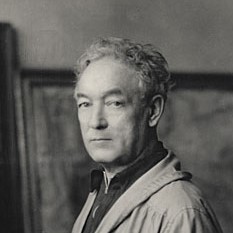 William James Glackens was an American realist painter and one of the founders of the Ashcan School, which rejected the formal boundaries of artistic beauty laid-down by the conservative National Academy of Design. He is also known for his work in helping Albert C. Barnes to acquire the European paintings that form the nucleus of the famed Barnes Foundation in Philadelphia. His dark-hued, vibrantly painted street scenes and depictions of daily life in pre-WW I New York and Paris first established his reputation as a major artist. His later work was brighter in tone and showed the strong influence of Renoir. During much of his career as a painter, Glackens also worked as an illustrator for newspapers and magazines in Philadelphia and New York City.

Glackens was born in Philadelphia, Pennsylvania, where his family had lived for many generations. William had two siblings: an older sister, Ada, and an older brother, cartoonist and illustrator Louis Glackens. He graduated from the prestigious Central High School in 1890. Throughout his school years, he showed a great interest in and aptitude for drawing and drafting.

After graduation, Glackens became an artist-reporter for The Philadelphia Record. In 1892, he left that newspaper and began illustrating for the Philadelphia Press. He enrolled in evening classes at the Pennsylvania Academy of the Fine Arts, studying under the renowned realist Thomas Anshutz. Glackens was not a steady pupil, as art critic Forbes Watson would observe in 1923: "So much impression did the various instructors make upon him that today he can hardly remember who taught there when he was a pupil." John Sloan also attended the Academy, and he introduced Glackens to Robert Henri, a talented painter and charismatic figure in Philadelphia art circles. Henri played host to regular artists' gatherings at his studio, occasions to socialize, drink, sketch, talk about art, and give artistic criticism of one another's work. Henri urged the young men he brought together to read Whitman and Emerson, William Morris Hunt's Talks on Art and George Moore's Modern Painting, and to think about the need to create a vigorous new American art that spoke to their time and experience. These gatherings were the inspirational beginning of what became known as the Ashcan school of American art, a style that rejected the formality and gentility of 19th-century academic art and looked to working-class and middle-class metropolitan life for its material.

In 1895, Glackens traveled to Europe with several fellow painters, including Henri, to paint and to immerse himself in European art. He first visited Holland where he studied the Dutch masters. He then moved to Paris, where he rented a studio for a year with Henri and enjoyed his first exposure to the art of the Impressionists and Post-Impressionists. (For both men, "Manet became an idol.") Such a trip was common for artists of the time who wished to establish themselves in an American art world still looked upon as provincial by those artists and art lovers with a deeper experience of the Old Masters and the new art movements. While in Paris, Glackens painted independently, but did not attend any classes. Later in life, a confirmed Francophile, Glackens returned periodically to paint in Paris and the south of France.

Upon settling in New York in 1896, Glackens began work as an artist for the New York World, a position he attained through his friend and fellow illustrator George Luks, a painter who had also been a participant in the Henri studio sessions in Philadelphia. Glackens later became a sketch artist for the New York Herald. He also worked as an illustrator for various magazines, including McClure's Magazine, which sent him to Cuba to cover the Spanish–American War. At this time, Glackens was making a living as a magazine illustrator, but his real passion lay in painting. In 1901, he exhibited at the Allen Gallery with Henri and Sloan and thereafter gained favorable notice as an up-and-coming artist.

In 1904, Glackens married Edith Dimock, the daughter of a wealthy Connecticut family. She was also an artist, and they lived together in a Greenwich Village townhouse, where they raised two children, Lenna and Ira. If many of their artist friends lived a bohemian life by the standards of the day, such was not the case with William and Edith Glackens. In 1957, Ira Glackens published an anecdotal book about his father and the role he played in the emerging realist movement in art.

In 1906 he was elected into the National Academy of Design as an Associate member, and became a full Academician in 1933.

In New York, Glackens became associated with a group of artists known today as The Eight, five of whom (Robert Henri, John Sloan, George Luks, and Everett Shinn as well as Glackens) are considered Ashcan realists. The other members of this loose association were Arthur B. Davies, Ernest Lawson, and Maurice Prendergast. "The Eight" was a not term of the group's own choosing, but after their first exhibition in 1908, it became their unofficial title in the press, alluding to the fact that the artists' cause had little to do with stylistic similarities and everything to do with art politics. These eight men had decided to hold a separate exhibition after experiencing repeated rejection from the "official" exhibitions at the powerful, conservative National Academy of Design. Their breakaway venture was, in part, a way of protesting that controlling body's rigid definition of artistic beauty. Their show at the Macbeth Gallery was a small-scale "succès de scandale" and toured several cities from Newark to Chicago in an traveling exhibition curated by Sloan. The painters gained wider recognition and were invited to exhibit at many institutions. More importantly, they had initiated a national debate about acceptable subject matter in art and the need to end the constraints of The Genteel Tradition in American culture. Most of the Eight also participated in the "Exhibition of Independent Artists" in 1910, a further attempt to break down the exclusivity of the Academy.

Glackens, Henri, Sloan, Luks, and Shinn were key figures in the realist movement in the visual arts during the years (c. 1895-1920) when challenging writers of realist fiction, such as Stephen Crane, Theodore Dreiser, and Frank Norris, were gaining wider audiences and struggling to set aside the Genteel Tradition in American letters. The painters depicted robust, sometimes inelegant urban themes and welcomed artistic freedom. They were not concerned with modernist techniques; their focus was on energetic painting and fresh, accessible subject matter. Glackens was an integral part of the group. The genre aspects of Ashcan art are evident in his work of the time, particularly in paintings like Hammerstein's Roof Garden (1901), Easter River from Brooklyn (1902), Tugboat and Lighter (1904), and Winter, Central Park (1905).

Glackens' friend, artist Jerome Myers, recalls in his autobiography Artist In Manhattan his visits with Glackens: "The studio home of William Glackens, on Ninth Street just off Fifth Avenue, partook of the charm of this fine, boasted period. It was a delightful privilege for my wife and me to participate occasionally in the at-homes of the Glackens[es] during the season. Surrounded by the masterpieces of William Glackens, friends would gather in congenial remembrance: Edith Glackens, always an amusing hostess; William Glackens, quietly reminiscing with his companions. The young Glackens[es], Lenna and Ira, filled out the family picture, happy with their young artist friends, as well as with older friends who had known them since childhood. Of the latter were Everett Shinn and Guy Pène du Bois....the whole scene [was] imbued with the spirit of a New York that is now passing."

By 1910, Glackens began to concentrate on a "highly personal coloristic style" which represented a break from the Ashcan approach to art. It was, his biographer William Gerdts wrote, "his conversion to mainstream Impressionism." His work was often compared to that of Renoir, to the point that he was called "the American Renoir." Glackens' response to this criticism was always the same: "Can you think of a better man to follow than Renoir?" In aesthetic terms, Glackens' link to his friends who were a part of the Ashcan movement was always tenuous. Ultimately, Glackens was a "pure" painter for whom the sensuousness of the art form was paramount, not a social chronicler or an artist with a bent for politics or provocation.

At this time, millionaire-inventor Albert C. Barnes, a classmate and friend from Central High School, began to study and collect modern art. He commissioned Glackens to buy him some "advanced" works while on a trip to Paris. Glackens returned from Paris with about twenty paintings, which included works by Cézanne, Renoir, Manet, and Matisse, formed the core of what became the Barnes Foundation Collection. Glackens also advised Barnes on later art movements and purchases. Among New York artists, Glackens was known for his sophisticated eye and his wide and cosmopolitan tastes. Not surprisingly, he was less unnerved by the European modernism of the 1913 Armory Show than some of his Ashcan colleagues who saw that exhibition as a threat to American realist art.

In 1916, Glackens served as the president of the newly founded Society of Independent Artists, whose mission was to provide broader exhibition opportunities for lesser-known artists. He continued to travel to France between 1925 and 1935 to study the work of the Impressionists and the Post-Impressionists. His paintings received gold medals from annual exhibitions at the Pennsylvania Academy of Fine Arts in 1933 and again in 1936. In contrast to many of his friends among The Eight, such as Sloan and Luks, whose personal lives were turbulent and whose finances were uncertain, Glackens enjoyed a happy marriage, a contented home life, and a steady career, though by the 1930s he was seen by a younger generation interested in abstraction, surrealism, and political art as an old-fashioned artist.

Glackens died suddenly while vacationing in Westport, Connecticut on May 22, 1938. He was interred at Cedar Hill Cemetery in Hartford, Connecticut. His posthumous retrospective at the Whitney Museum of American Art several months later, also shown at the Carnegie Institute at Pittsburgh, was well received. His legacy is linked to that of the Ashcan school and The Eight. Although he distanced himself from some of their ideals, William Glackens continued to be considered an integral part of the realist movement in American art. 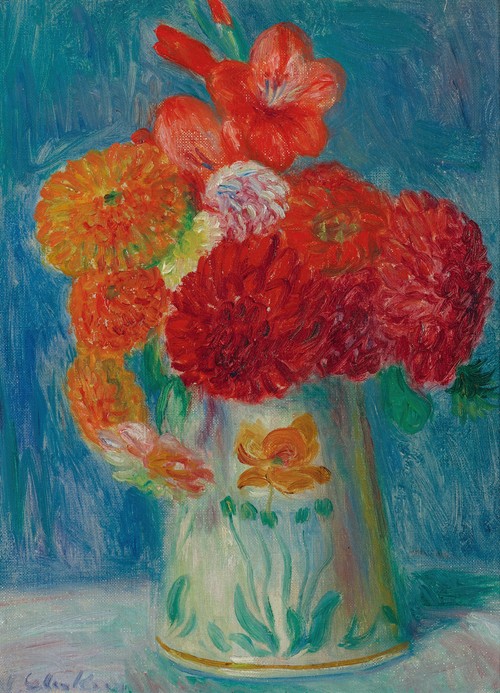 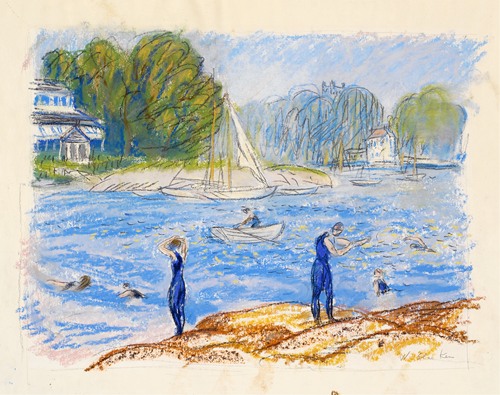 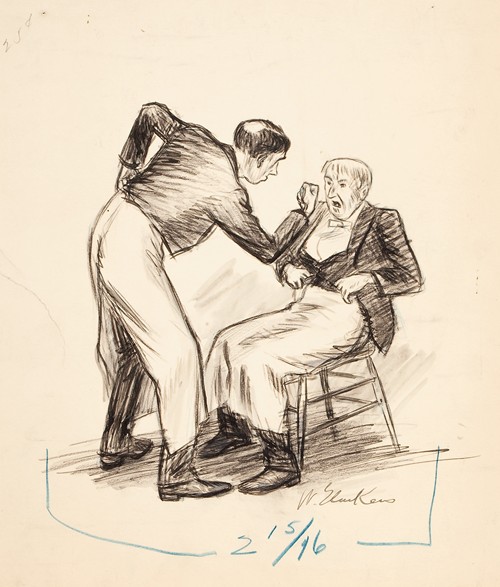 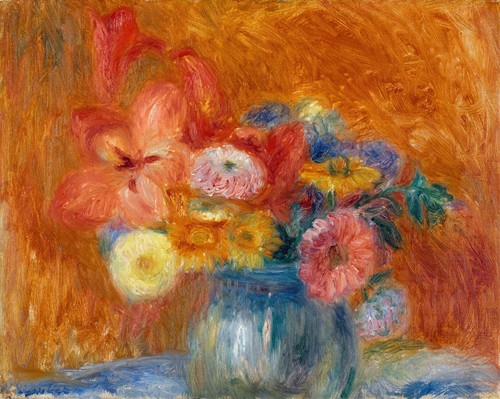 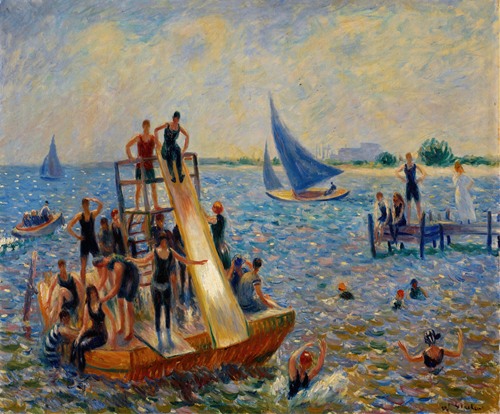 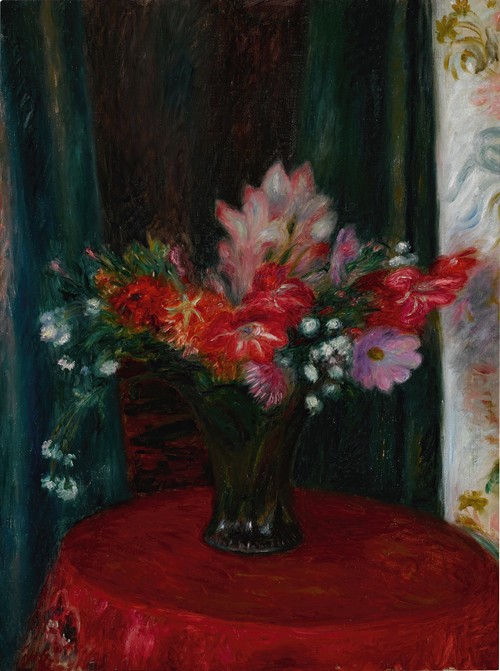