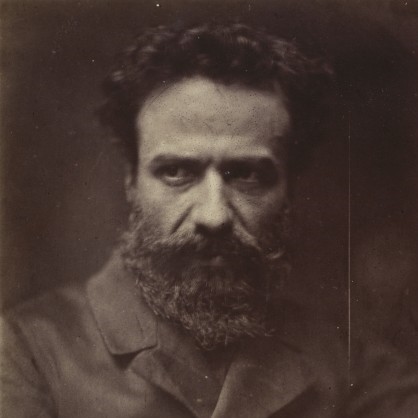 Alphonse Legros was a French, later British, painter, etcher, sculptor, and medallist. He moved to London in 1863 and later took citizenship. He was important as a teacher in the British etching revival.

In 1859, Legros's L'Angelus was exhibited, the first of the church interiors for which he was best known. Two years later Ex Voto (1861; Musée des Beaux-Arts de Dijon) was exhibited, but only obtained a mention at the Salon. He moved to England in 1863 and in 1864 married Frances Rosetta Hodgson. At first he lived by his etching and teaching. He then became teacher of etching at the South Kensington School of Art, and in 1876 Slade Professor at University College London in succession to Edward Poynter.

Whilst teaching at the Slade School Legros taught a large contingent of women, who came to be known as the Slade Girls. Through his field of sculpture he encouraged the design of medals based upon the Italian renaissance style of portrait, illustrating the character, profession or life of the individual portrayed.

The Slade Girls attracted commissions from a range of societies and organisations due to the beauty and skill of their work. Pupils of note include the Casella sisters (Ella and Nelia), Jessie Mothersole, Fedora Gleichen, Lilian Swainson (later Hamilton) and Elinor Hallé.

Legros was naturalized as a British citizen in 1881, and remained at University College for 17 years. He would draw or paint a torso or a head for the students in an hour or less; in the painting school he insisted on a good outline, preserved by a thin rub in of umber, and then the work was to be finished in a single painting.

Head of a Man III