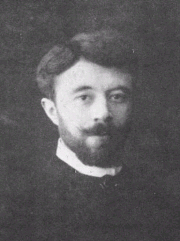 Hendrik Nicolaas Werkman (commonly called H.N. Werkman) was an experimental Dutch artist, typographer and printer. He set up a clandestine printing house during the Nazi occupation (1940–45) and was shot by the Gestapo in the closing days of the war.

Werkman was born on 29 April 1882 in Leens, in the province of Groningen. He was the son of a veterinary surgeon who died while he was young, after which his mother moved the family to the city of Groningen. In 1908, he established a printing and publishing house there that at its peak employed some twenty workers. Financial setbacks forced its closure in 1923, after which Werkman started anew with a small workshop in the attic of a warehouse.

Werkman was a member of the artists' group De Ploeg ("The Plough"), for whom he printed posters, invitations and catalogues. From 1923 to 1926, he produced his own English-named avant-garde magazine The Next Call, which, like other works of the period, included collage-like experimentation with typefaces, printing blocks and other printers' materials. He would distribute the magazine by exchanging it for works by other avant-garde artists and designers abroad and so kept in touch with progressive trends in European art. Among the most fruitful contacts were with Theo van Doesburg, Kurt Schwitters, El Lissitzky and Michel Seuphor, the last of whom exhibited a print of his in Paris.[page needed] This exchange would prove very fruitful, as foreign magazines served as a source of inspiration for Werkman - as he himself admitted, even though he did not always understand the contents, Werkman searched for new ideas on the pages of the magazines he received.

Such contact was vital while Werkman was building up his business and could not leave Groningen. In 1929 he was able to visit Cologne and Paris, after which he developed a new printing method, applying the ink roller directly to the paper and then stamping to achieve unique effects on a simple handpress. The more complex of these required some fifty handlings in and out of the press and could take a whole day to complete. Another of his experimental techniques was the painstaking production of abstract designs using the typewriter, which he called tiksels. After 1929 he also began writing rhythmic sound poems.

In May 1940, soon after the German invasion of the Netherlands, Werkman started a clandestine publishing house, De Blauwe Schuit ("The Blue Barge"), which ran to forty publications, all designed and illustrated by Werkman. Included there were a series of Hassidic stories from the legend of the Baal Shem Tov. On 13 March 1945, the Gestapo arrested Werkman, executing him by firing squad along with nine other prisoners in the forest near Bakkeveen on 10 April, three days before Groningen was liberated. Many of his paintings and prints, which the Gestapo had confiscated, were lost in the fire that broke out during the battle over the city.

Abstract design based on flowers and arabesques. (1900)