Angels Descending to the Daughters of Men (probably c. 1821)

The Artist died in 1826 so this work is in the public domain in its country of origin and other countries where the copyright term is the Artist's life plus 70 years or fewer. 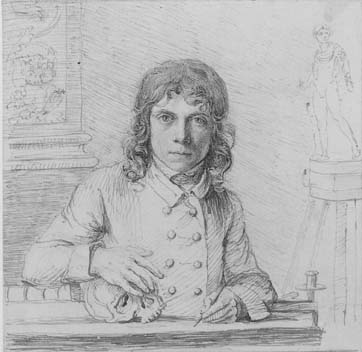 John Flaxman was a British sculptor and draughtsman, and a leading figure in British and European Neoclassicism. Early in his career he worked as a modeller for Josiah Wedgwood's pottery. He spent several years in Rome, where he produced his first book illustrations. He was a prolific maker of funerary monuments.

He was born in York. His father, also named John (1726–1803), was well known as a moulder and seller of plaster casts at the sign of the Golden Head, New Street, Covent Garden, London. His wife's maiden name was Lee, and they had two children, William and John. Within six months of John's birth the family returned to London. He was a sickly child, high-shouldered, with a head too large for his body. His mother died when he was nine, and his father remarried. He had little schooling, and was largely self-educated. He took delight in drawing and modelling from his father's stock-in-trade, and studied translations from classical literature in an effort to understand them.

His father's customers helped him with books, advice, and later with commissions. Particularly significant were the painter George Romney, and a cultivated clergyman, Anthony Stephen Mathew and his wife Mrs. Mathew, in whose house in Rathbone Place the young Flaxman used to meet the best "blue-stocking" society of the day and, among those his own age, the artists William Blake and Thomas Stothard, who became his closest friends. At the age of 12 he won the first prize of the Society of Arts for a medallion, and exhibited in the gallery of the Free Society of Artists; at 15 he won a second prize from the Society of Arts showed at the Royal Academy for the first time. In the same year, 1770, he entered the Academy as a student and won the silver medal. In the competition for the gold medal of the Academy in 1772, however, Flaxman was defeated, the prize being awarded by the president, Sir Joshua Reynolds, to a competitor named Engleheart. This episode seemed to help cure Flaxman of a tendency to conceit which led Thomas Wedgwood V to say of him in 1775, "It is but a few years since he was a most supreme coxcomb."

He continued to work diligently, both as a student and as an exhibitor at the Academy, with occasional attempts at painting.

Two Studies of the Throne of Gregory the Great, Church of San Gregorio Magno, Rome (1787)

Design for a Candelabrum Representing the Three Graces Gathering the Apples of Hesper (c. 1809)

Design for a Medal Representing Saint George and the Dragon

Study of Niobe and Her Youngest Daughter from the Right, Niobid Group, Villa Medici Gardens, Rome (1787)