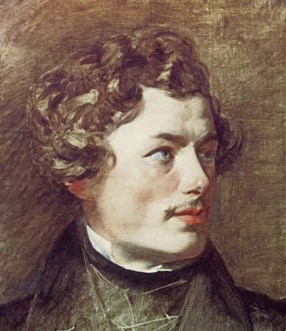 Josef Danhauser was an Austrian painter, one of the main artists of Biedermeier period, together with Ferdinand Georg Waldmüller, Peter Fendi, among others. His works, not very appreciated in his days, dealt with very moralising subjects and had a clear influence of William Hogarth.

Joseph Danhauser was born in Vienna in 1805, the eldest son of sculptor and furniture manufacturer Joseph Ulrich Danhauser and his wife Johanna (née Lambert).

He took his first painting lessons with his father and later assisted the Vienna Academy of Fine Arts. He studied with Johann Peter Krafft and made his first exhibition 1826.

Invited by Johann Ladislaus Pyrker, patriarch of Venice, he visited the city of Doges, where he started to study the Italian masters. He came back to Vienna via Trieste in 1827, visiting Prague. On March 27, 1827 he and his colleague de:Johann Matthias Ranftl molded Ludwig van Beethoven's death mask, roughly 12 hours after his death and Danhauser painted a water-colour representing his deathbed. In 1828, he spent some time in Eger, with an invitation of this Hungarian city archbishop Pyrker. He solicited him for some pictures for the gallery of the Archdiocese.

After his father's death in 1829, his brothers and he managed his furniture factory during the Biedermeier movement, being the precursors of modern design. That made him put his painting career aside.

In 1833, he responded to a second invitation from Eger's archbishop and he painted The martyr of Saint John for a new basilica in the city and he received the Vienna Academy prize for his picture Die Verstoßung der Hagar and he specialised in Genre works. In 1838, he was appointed vice-rector of the Academy and married Josephine Streit, who was the daughter of a physician and with whom he had three children, Josef, Marie and Julie, born in 1839, 1841 and 1843 respectively.

Josef Danhauser was appointed professor of historical Painting at the Academy in 1841, but he left this occupation and he travelled around Germany and the Netherlands with the textile maker, art aficionado and art sponsor Rudolf von Arthaber. In this journey, he was very interested in the Dutch School and the format of his works was smaller. He died of typhus in Vienna in 1845 and was buried in Hundstrumer Cemetery, though his grave was later moved. In 1862, a street was named after him in Vienna.