The Artist died in 1822 so this work is in the public domain in its country of origin and other countries where the copyright term is the Artist's life plus 70 years or fewer. 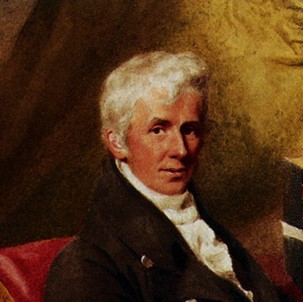 James Sowerby was an English naturalist, illustrator and mineralogist. Contributions to published works, such as A Specimen of the Botany of New Holland or English Botany, include his detailed and appealing plates. The use of vivid colour and accessible texts were intended to reach a widening audience in works of natural history. The standard author abbreviation Sowerby is used to indicate this person as the author when citing a botanical name.

James Sowerby was born in Lambeth, London, his parents were named John and Arabella. Having decided to become a painter of flowers his first venture was with William Curtis, whose Flora Londinensis he illustrated. Sowerby studied art at the Royal Academy and took an apprenticeship with Richard Wright. He married Anne Brettingham De Carle and they were to have three sons: James De Carle Sowerby (1787–1871), George Brettingham Sowerby I (1788–1854) and Charles Edward Sowerby (1795–1842), the Sowerby family of naturalists. His sons and theirs were to contribute and continue the enormous volumes he was to begin and the Sowerby name was to remain associated with illustration of natural history.

An early commission for Sowerby was to lead to his prominence in the field when the botanist L'Hértier de Brutelle invited Sowerby to provide the plates for his monograph, Geranologia, and two later works. He also came to the notice of William Curtis, who was undertaking a new type of publication. Early volumes of the first British botany journal, The Botanical Magazine, contained fifty-six of his illustrations.

In 1790, he began the first of several huge projects: a 36-volume work, English Botany that was published over the next 23 years, contained 2,592 hand-coloured engravings and became known as Sowerby's Botany. An enormous number of plants were to receive their first formal publication within this work, but the authority for these came from the initially unattributed text written by James Edward Smith. The work was continued by his son, James de Carle Sowerby who published a further set of 204 plates, mostly uncoloured until the end of the first edition in 1835. Further plates were added by other hands up to 1865 ending with plate number 2,999.

It was the inclusion of science in the form of natural history, such as the thousands of botanical supplied by Smith or his own research, that distinguished Sowerby's art from early forms of still life. This careful description of the subjects, drawing from specimens and research, was in contrast to the flower painting of the Rococo period found illuminating the books and galleries of a select audience. Sowerby intended to reach an audience whose curiosity for gardening and the natural world could be piqued by publishing the attractive and more affordable works. The appealing hand coloured engravings also became highly valued by researchers into the new fields of science.

His next project was of similar scale: the Mineral Conchology of Great Britain, a comprehensive catalog of many invertebrate fossils found in England, was published over a 34-year time-span, the latter parts by his sons James De Carle Sowerby and George Brettingham Sowerby I. The finished worked contains 650 colored plates distributed over 7 volumes.

He also developed a theory of colour and published two landmark illustrated works on mineralogy: the British Mineralogy (1804–1817) and as a supplement to it the Exotic Mineralogy (1811–1820).

Sowerby retained the specimens used in the expansive volumes he helped to produce. Many notable geologists, and other scientists of the day were to lend or donate specimens to his collection. He had intended that his
some thousands of minerals, many not known elsewhere, a great variety of fossils, most of the plants of English Botany about 500 preserved specimens or models of fungi, quadrupeds, birds, insects, &c. all the natural production of Great Britain become the foundation of a museum.

The addition of a room at the rear of his residence, housing this collection, was to see visits from the president of the Royal Society, Joseph Banks, and Charles Francis Greville who also lent to the informal institution. A much sought exhibit, one that was frequently chipped for samples, was the Yorkshire meteorite; this was sighted and collected in 1795, the first recorded English meteorite.

James' great grandson, the explorer and naturalist Arthur de Carle Sowerby continued the family tradition, providing many specimens for the British Museum and museums in Shanghai and Washington D.C. 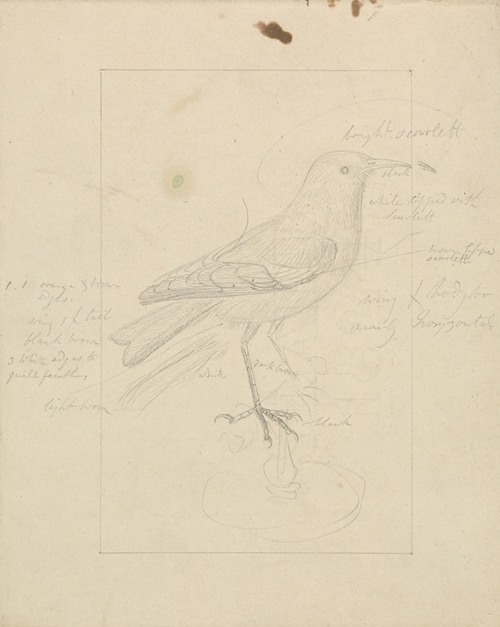 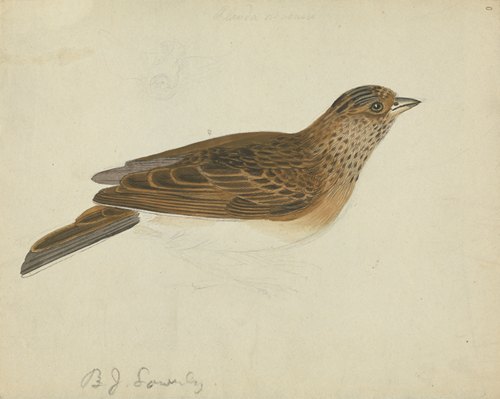 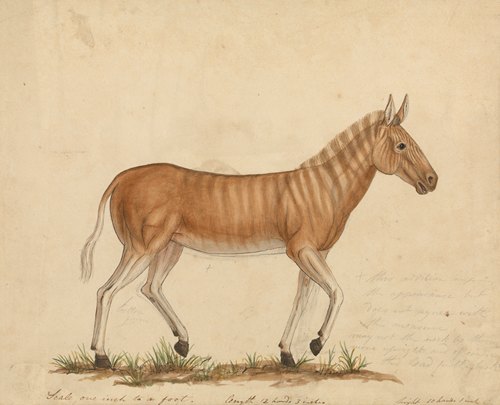 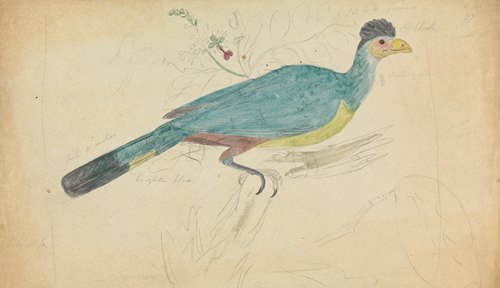 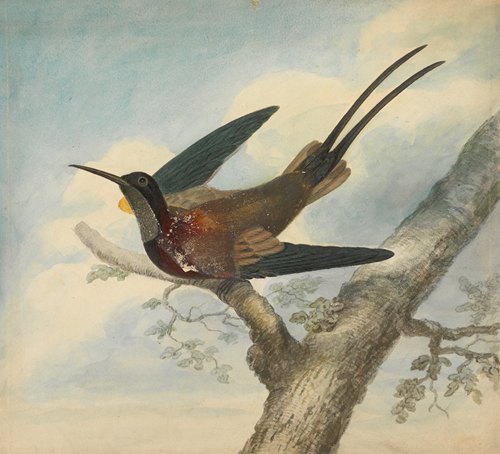 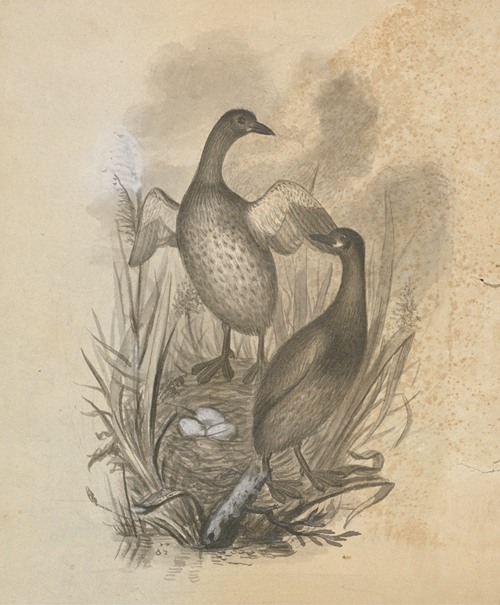 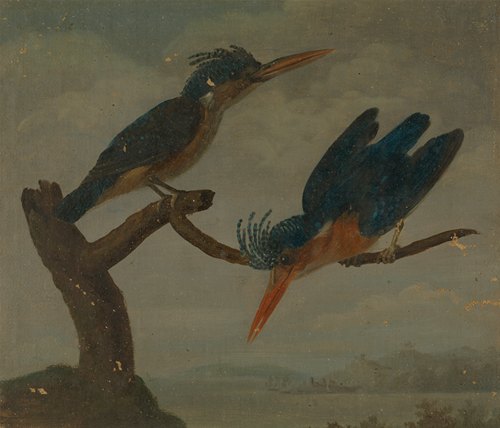 Two Kingfishers beside a Lake. 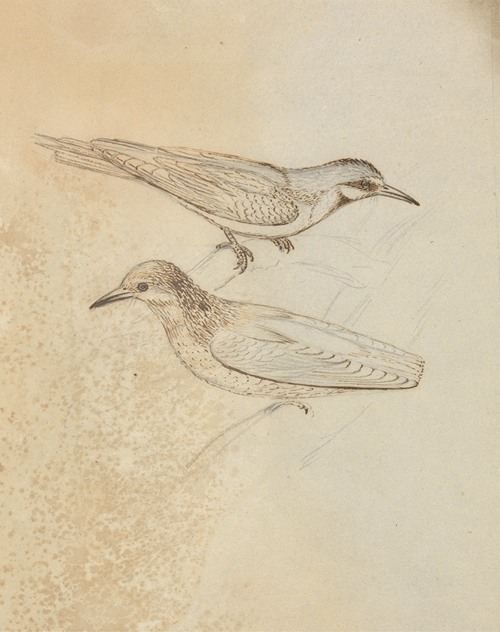