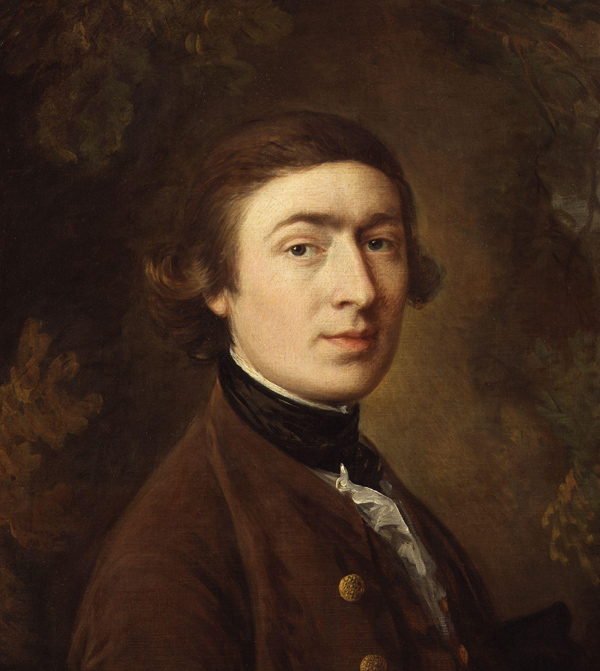 Thomas Gainsborough RA FRSA was an English portrait and landscape painter, draughtsman, and printmaker. Along with his rival Sir Joshua Reynolds, he is considered one of the most important British artists of the second half of the 18th century. He painted quickly, and the works of his maturity are characterised by a light palette and easy strokes. Despite being a prolific portrait painter, Gainsborough gained greater satisfaction from his landscapes. He is credited (with Richard Wilson) as the originator of the 18th-century British landscape school. Gainsborough was a founding member of the Royal Academy.

He was born in Sudbury, Suffolk, the youngest son of John Gainsborough, a weaver and maker of woolen goods, and his wife Mary, the sister of the Reverend Humphry Burroughs. One of Gainsborough's brothers, Humphrey, had a faculty for mechanics and was said to have invented the method of condensing steam in a separate vessel, which was of great service to James Watt; another brother, John, was known as Scheming Jack because of his passion for designing curiosities.

The artist spent his childhood at what is now Gainsborough's House, on Gainsborough Street, Sudbury. He later resided there, following the death of his father in 1748 and before his move to Ipswich. The building still survives and is now a house-museum dedicated to his life and art.

When he was still a boy he impressed his father with his drawing and painting skills, and he almost certainly had painted heads and small landscapes by the time he was ten years old, including a miniature self-portrait. Gainsborough was allowed to leave home in 1740 to study art in London, where he trained under engraver Hubert Gravelot but became associated with William Hogarth and his school. He assisted Francis Hayman in the decoration of the supper boxes at Vauxhall Gardens, and contributed one image to the decoration of what is now the Thomas Coram Foundation for Children.

In 1746, Gainsborough married Margaret Burr, an illegitimate daughter of the Duke of Beaufort, who had settled a £200 annuity on her. The artist's work, then mostly consisting of landscape paintings, was not selling well. He returned to Sudbury in 1748–1749 and concentrated on painting portraits. While still in Suffolk, Gainsborough painted a portrait of The Rev. John Chafy Playing a Violoncello in a Landscape (c.1750–1752; Tate Gallery, London).

In 1752, he and his family, now including two daughters, Mary ("Molly", 1750–1826) and Margaret ("Peggy", 1751–1820), moved to Ipswich. Commissions for portraits increased, but his clients included mainly local merchants and squires. He had to borrow against his wife's annuity. Toward the end of his time in Ipswich, he painted a self-portrait, now in the permanent collection of the National Portrait Gallery, London.

In 1759, Gainsborough and his family moved to Bath, living at number 17 The Circus. There, he studied portraits by van Dyck and was eventually able to attract a fashionable clientele. In 1761, he began to send work to the Society of Arts exhibition in London (now the Royal Society of Arts, of which he was one of the earliest members); and from 1769 he submitted works to the Royal Academy's annual exhibitions. The exhibitions helped him enhance his reputation, and he was invited to become a founding member of the Royal Academy in 1769. His relationship with the Academy was not an easy one and he stopped exhibiting his paintings in 1773.

Despite Gainsborough's increasing popularity and success in painting portraits for fashionable society, he expressed frustration during his Bath period at the demands of such work and that it prevented him from pursuing his preferred artistic interests.

In 1774, Gainsborough and his family moved to London to live in Schomberg House, Pall Mall. A commemorative blue plaque was put on the house in 1951. In 1777, he again began to exhibit his paintings at the Royal Academy, including portraits of contemporary celebrities, such as the Duke and Duchess of Cumberland. Exhibitions of his work continued for the next six years. About this time, Gainsborough began experimenting with printmaking using the then-novel techniques of aquatint and soft-ground etching.

During the 1770s and 1780s Gainsborough developed a type of portrait in which he integrated the sitter into the landscape. An example of this is his portrait of Frances Browne, Mrs John Douglas (1746–1811) which can be seen at Waddesdon Manor. The sitter has withdrawn to a secluded and overgrown corner of a garden to read a letter, her pose recalling the traditional representation of Melancholy. Gainsborough emphasised the relationship between Mrs Douglas and her environment by painting the clouds behind her and the drapery billowing across her lap with similar silvery violet tones and fluid brushstrokes. This portrait was included in his first private exhibition at Schomberg House in 1784.

In 1776, Gainsborough painted a portrait of Johann Christian Bach, the youngest son of Johann Sebastian Bach. Bach's former teacher Padre Martini of Bologna, Italy, was assembling a collection of portraits of musicians, and Bach asked Gainsborough to paint his portrait as part of this collection. The portrait now hangs in the National Portrait Gallery in London.

In 1780, he painted the portraits of King George III and Queen Charlotte and afterwards received other royal commissions. In February 1780, his daughter Molly was married to his musician friend Johann Christian Fischer, to Gainsborough's dismay, as he realized that Fischer was forming an attachment to Molly while carrying on flirtation with Peggy. The marriage between Molly and Fischer only lasted 8 months due to their discord and Fischer's deceit.

In 1784, Principal Painter in Ordinary Allan Ramsay died and the King was obliged to give the job to Gainsborough's rival and Academy president, Joshua Reynolds. Gainsborough remained the Royal Family's favorite painter, however.

In his later years, Gainsborough often painted landscapes. With Richard Wilson, he was one of the originators of the eighteenth-century British landscape school; though simultaneously, in conjunction with Reynolds, he was the dominant British portraitist of the second half of the 18th century.

William Jackson in his contemporary essays said of him "to his intimate friends he was sincere and honest and that his heart was always alive to every feeling of honour and generosity". Gainsborough did not particularly enjoy reading but letters written to his friends were penned in such an exceptional conversational manner that the style could not be equalled. As a letter writer Henry Bate-Dudley said of him "a selection of his letters would offer the world as much originality and beauty as is ever traced in his paintings".

In the 1780s, Gainsborough used a device he called a "Showbox" to compose landscapes and display them backlit on glass. The original box is on display in the Victoria & Albert Museum with a reproduction transparency.

He died of cancer on 2 August 1788 at the age of 61. According to his daughter Peggy, his last words were "van Dyck". He is interred in the churchyard St. Anne's Church, Kew, Surrey, (located on Kew Green). It was his express wish to be buried near his friend Joshua Kirby. Later his wife and nephew Gainsborough Dupont were interred with him. Coincidentally Johan Zoffany and Franz Bauer are also buried in the graveyard. As of 2011, an appeal is underway to pay the costs of restoration of his tomb. A street in Kew, Gainsborough Road, is named after him.

Lady Lloyd and Her Son, Richard Savage Lloyd, of Hintlesham Hall, Suffolk (between 1745 and 1746)