Théophile "Théo" van Rysselberghe was a Belgian neo-impressionist painter, who played a pivotal role in the European art scene at the turn of the twentieth century.

Born in Ghent to a French-speaking bourgeois family, he studied first at the Academy of Ghent under Theo Canneel and from 1879 at the Académie Royale des Beaux-Arts in Brussels under the directorship of Jean-François Portaels. The North African paintings of Portaels had started an orientalist fashion in Belgium. Their impact would strongly influence the young Théo van Rysselberghe. Between 1882 and 1888 he made three trips to Morocco, staying there in total a year and a half.

Age only eighteen, he had already participated at the Salon of Ghent, showing two portraits. Soon afterwards followed his Self-portrait with pipe (1880), painted in somber colours in the Belgian realistic tradition of the times. His Child in an open spot of the forest (1880) departs from this style and he makes his first steps towards impressionism. Soon he would develop his own realistic style, akin to impressionism. In 1881 he exhibited for the first time at the Salon in Brussels.

The next year he travelled (following in the footsteps of Jean-François Portaels) extensively in Spain and Morocco together with his friend Frantz Charlet and the Asturian painter Darío de Regoyos. He especially admired the 'old masters' in the Museo del Prado. In Seville they met Constantin Meunier, who was copying Pedro Campaña's Descent from the Cross. From this Spanish trip stem the following portraits : Spanish woman (1881) and Sevillan woman (1882), already completely different in style. When he set foot in Tanger at the end of October 1882, a whole new world opened up for him: so close to Europe and yet completely different. He would stay there for four months, drawing and painting the picturesque scenes on the street, the kasbah and in the souk: Arabian street cobbler (1882), Arabian boy (1882), Resting guard (1883)

Back in Belgium, he showed about 30 works of his trip at the "Cercle Artistique et Littéraire" in Ghent. It was an instant success, especially The kief smokers, The orange seller and a seascape The strait (setting sun), Tanger (1882).

In April 1883 he exhibited these scenes of everyday Mediterranean life at the salon L'Essor, in Brussels, before an enthusiast public. It was also around this time that he befriended the writer and poet Emile Verhaeren, whom he would later portray several times.

In September 1883 van Rysselberghe went to Haarlem to study the light in the works of Frans Hals. The accurate rendering of light would continue to occupy his mind. There he also met the American painter William Merritt Chase.

Théo van Rysselberghe was one of the prominent co-founders of the Belgian artistic circle Les XX on 28 October 1883. This was a circle of young radical artists, under the patronage, as secretary, of the Brussels jurist and art lover Octave Maus (1856–1919). They rebelled against the outmoded academism of the time and the prevailing artistic standards. Among the most notable members were James Ensor, Willy Finch, Fernand Khnopff, Félicien Rops, and later Auguste Rodin and Paul Signac. This membership brought van Rysselberghe in contact with other radical artists, such as James Abbott McNeill Whistler, who had exhibited in Les XX in 1884. His influence as a portrait painter can be seen in van Rysselberghe's portrait of Octave Maus as a dandy (1885). Van Rysselberghe would paint several portraits of Octave Maus and his wife between 1883 and 1890.

In November 1883 he left again, together with Frantz Charlet, for Tanger. During his stay of one year, he was in constant correspondence with Octave Maus, urging him to accept several new names for the first exhibition of "Les XX": Constantin Meunier, Alfred Verwee, William Merritt Chase. (He had met him in 1883 in Haarlem.) In April 1884 he visited Andalucia in the company of the American painter John Singer Sargent and the gentleman-painter Ralph Curtis. He also invited them to the exhibition in Brussels. This time, van Rysselberghe tried to surpass himself. His large, exotic painting Arabian phantasia, a theme introduced by Eugène Delacroix, is his best known work from this period. It is bathed in the harsh light of the hot Moroccan sun. From now on van Rysselberghe would be obsessed by light. But lack of funds forced him to return to Belgium at the end of October 1884.

At the second show of Les XX in 1885 Théo van Rysselberghe showed his Arabian phantasia and other images and paintings from his second Moroccan trip, such as Abraham Sicsu (interpreter in Tanger) (1884).

Yet his next portraits are in rather subdued colours, using different black or purple gradations contrasting with light colours: Jeanne and Marguerite Schlobach (1884), Octave Maus (1885), Camille Van Mons (1886), Marguerite Van Mons (1886) (to be compared with Portrait of Gabrielle Braun (1886) by Fernand Khnopff).

He saw the works of the impressionists Monet and Auguste Renoir at the show of Les XX in 1886. He was deeply impressed. He experimented with this technique, as can be seen in Woman with Japanese album (1886). This impressionist influence became prominent in his paintings Madame Picard in her Loge (1886) and Madame Oscar Ghysbrecht (1886) (painted in a palette of bright colours). In 1887 he painted some impressionist seascapes at the Belgian coast : Het Zwin at high tide (1887)

Because of his growing ties with the Parisian art scene, Octave Maus sent him as a talent scout to Paris to look out for new talent for the next exhibitions of Les XX.

He discovered the pointillist technique when he saw Georges Seurat's La Grande Jatte at the eighth impressionist exhibition in Paris in 1886. Together with Henry Van de Velde, Georges Lemmen, Xavier Mellery, Willy Schlobach and Alfred William Finch and Anna Boch he "imported" this style to Belgium. Seurat was invited to the next salon of Les XX in Brussels in 1887. But there his La Grande Jatte was heavily criticized by the art critics as "incomprehensible gibberish applied to the noble art of painting".

Théo van Rysselberghe abandoned realism and became an adept of pointillism. This brought him sometimes in heavy conflict with James Ensor. In 1887 van Rysselberghe already experimented with this style, as can be seen in his Madame Oscar Ghysbrecht (1887) and Madame Edmond Picard (1887). While staying in summer 1887 a few weeks with Eugène Boch (brother of Anna Boch) in Batignolles, near Paris, he met several painters from the Parisian scene such as Sisley, Signac, Degas and especially Henri de Toulouse-Lautrec. He appreciated especially the talent of Toulouse-Lautrec. His portrait Pierre-Marie Olin (1887) closely resembles the style of Toulouse-Lautrec of that time. He managed to invite several of them, including Signac, Forain, and Toulouse-Lautrec to the next exhibition of Les XX.

In December 1887 he was invited, together with Edmond Picard, to accompany a Belgian economic delegation to Meknès, Morocco. During these three months he made many color pencil sketches. He also drew a portrait of the sultan Hassan I. Back in Brussels, he started painting his impressions, relying on his photos, notes and sketches. His Nomad encampment (1887) is probably his first neo-impressionist work. In the Caravan in the mountains past Schliat, the influence of Seurat is unmistakable. His Gate of Mansour-El-Hay in Meknès (1887) and Morocco (the great souk) (1887) are also painted in pointillist style, but still with short strokes and not with points. These are among the rare pointillist paintings of Morocco. When he had finished these paintings, he stopped completely with this Moroccan period in his life.

He now turned to portraiture, resulting in a series of remarkable neo-impressionist portraits.

His famous portrait of Alice Sèthe (1888) in blue and gold would become a turning point in his life. This time he used merely points in the portrait. She would later marry the sculptor Paul Dubois. Her sister, Maria Sèthe, also a model of van Rysselberghe, would marry the renowned Art Nouveau architect Henry Van de Velde. In that period he made many Neo-impressionistic portraits, such as the portrait of his wife Maria and their daughter Elisabeth. He had married Marie Monnom in 1889. They went on their honeymoon to the south of England and then to Brittany. This would also result in a number of Neo-impressionistic paintings. In Paris he had a meeting with Theo Van Gogh and managed thus to invite Vincent van Gogh to the next exhibition in Brussels. That is where Van Gogh sold Vigne Rouge in Montmajour to Anna Boch, the only painting he ever sold.

Apart from the portraits, he also painted in this period many landscapes and seascapes : "Dunes in Cadzand" (1893), "The rainbow" (1894).

In the 1895 he made long journeys to Athens and Constantinople, Hungary, Romania, Moscow and Saint Petersburg in order to make posters for the "Compagnie des Wagons-lits". One famous work is the poster "Royal Palace Hotel, Ostende" (1899).

In the final years of the 1890s, Théo van Rysselberghe had reached the climax of his Neo-impressionist technique. Slowly he abandoned the use of dots in his portraits and landscapes and began applying somewhat broader strokes : The hippodrome at Boulogne-sur-Mer (1900) and the group portrait Summer afternoon (1900), Young women on the beach (1901), Young girl with straw bonnet (1901), and The Reading (1903) (with the contrast between red and blue colours).

After all his years as talent scout for Octave Maus, van Rysselberghe made the mistake of his life: he didn't recognize the talent of the young Pablo Picasso (who was in his Blue Period at that time). He found his works "ugly and uninteresting".

After 1903, his pointillist technique, which he had used for so many years, became more relaxed and after 1910 he abandoned it completely. His strokes had become longer and he used more often vivid colours and more intense contrasts, or softened hues. He had become a master in applying light and heat in his paintings. His Olive trees near Nice (1905) remind us of the technique used by Vincent van Gogh. These longer strokes in red and mauve become prominent in his Bathing ladies under the pine trees at Cavalière (1905)

After some prospecting, touring on his bike, together with his friend Henri-Edmond Cross, of the Mediterranean coast between Hyères and Monaco, he found an interesting spot in Saint-Clair (where Cross already resided). His brother (and neighbour), the architect Octave van Rysselberghe, built him there a residence in 1911. He retired now to the Côte d'Azur and became more and more detached from the Brussels art scene.

Here he continued painting, mostly landscapes of the Mediterranean coast, portraits (of his wife and daughter, and of his brother Octave). In 1910 he received an order for some large decorative murals and flower compositions for the residence of the family Nocard in Neuilly, France.

At the end of his life, he also turned to portrait sculpture, such as the Head of André Gide.

He died in Saint-Clair, Var, France on 14 December 1926 and was buried in the cemetery of Lavandou, next to his friend and painter Henri-Edmond Cross.

The Mediterranean at Le Lavandou (1904) 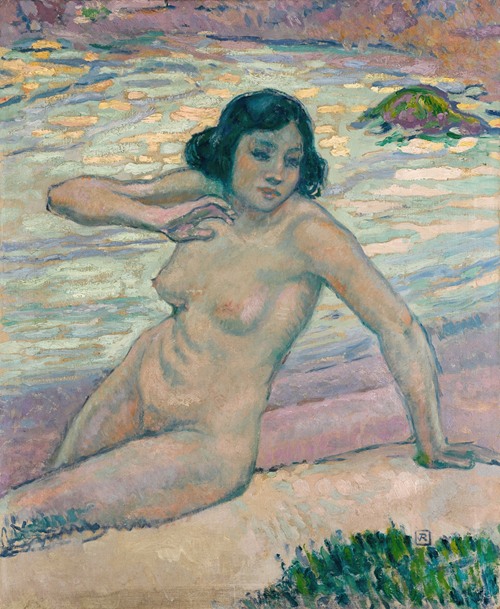 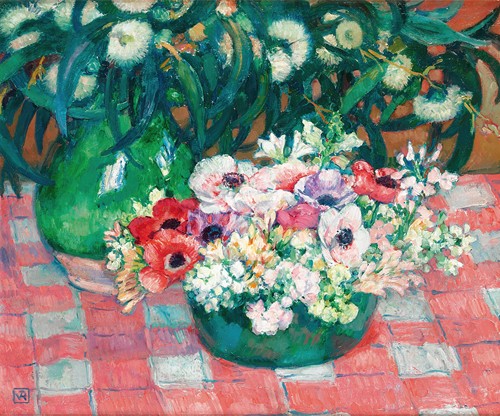 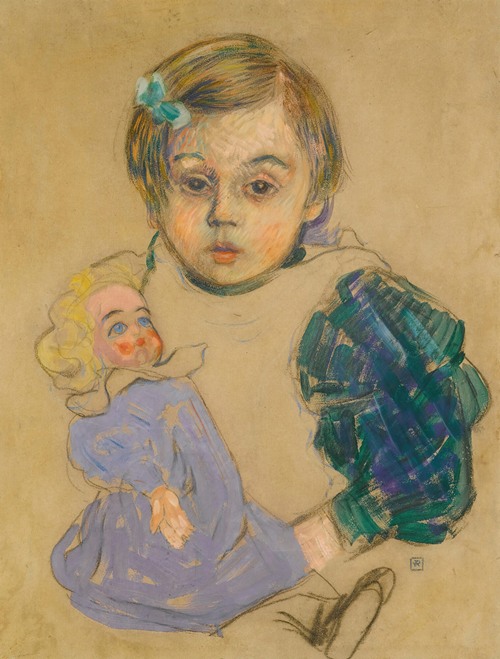 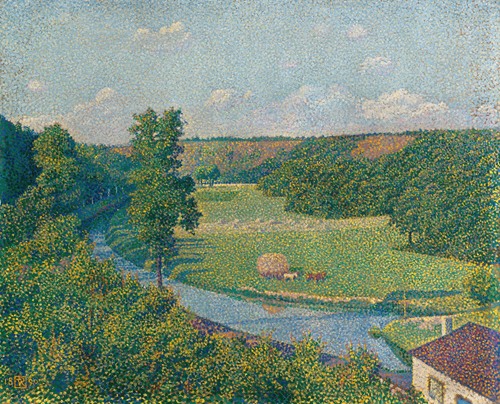 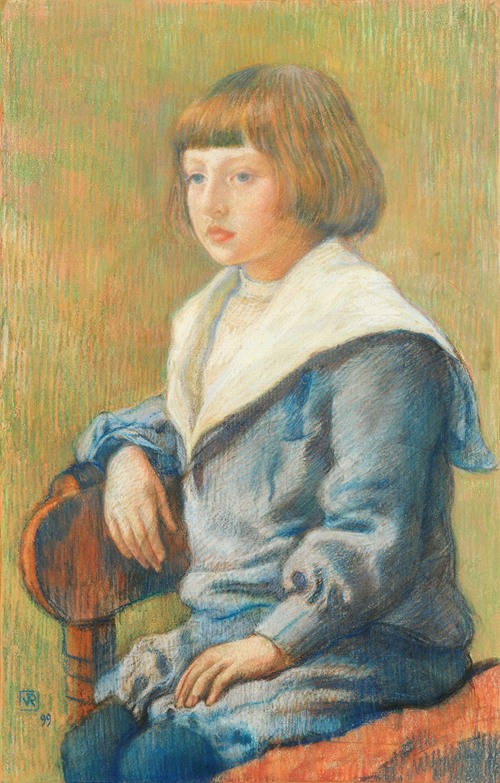 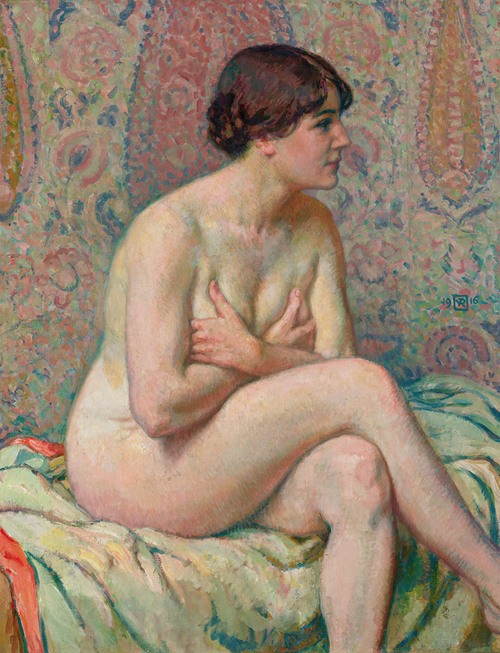 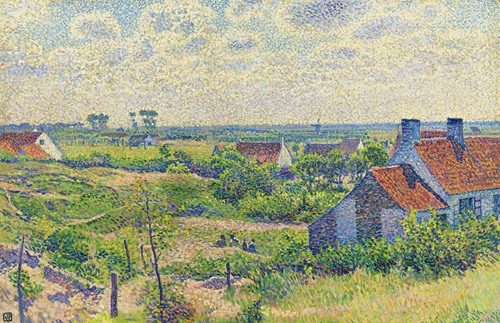 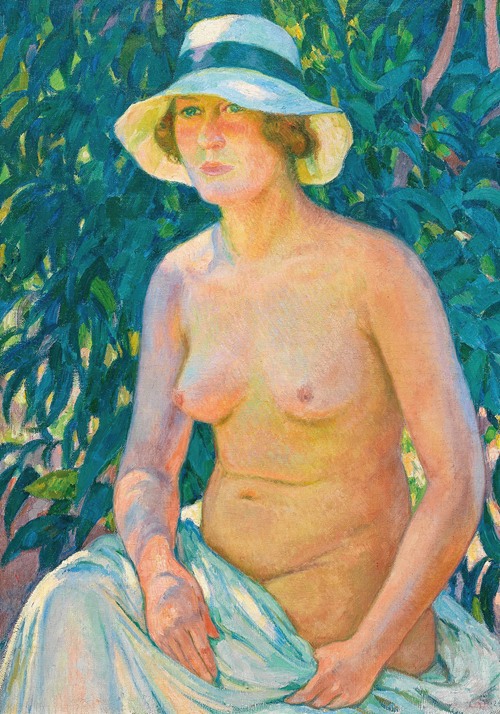 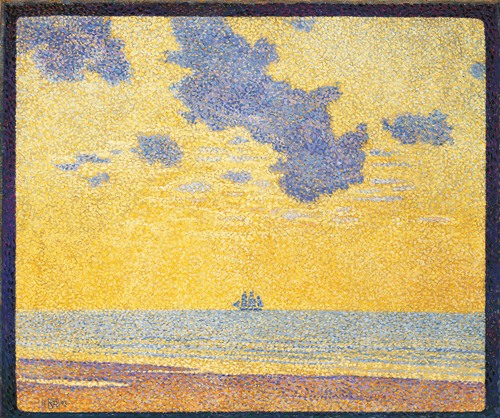 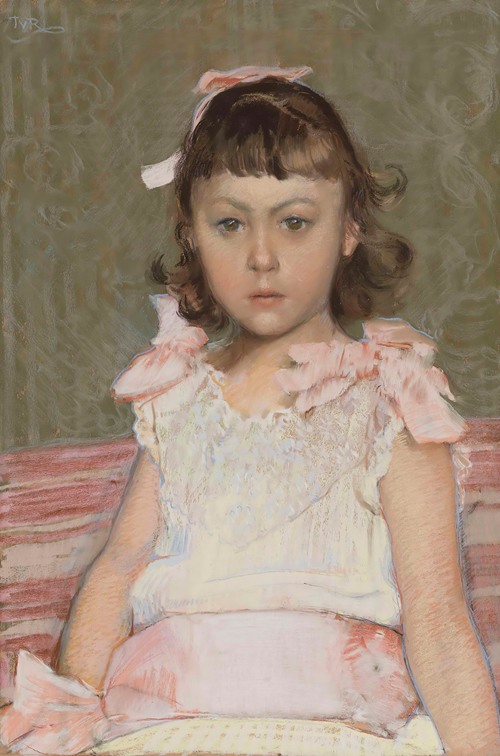 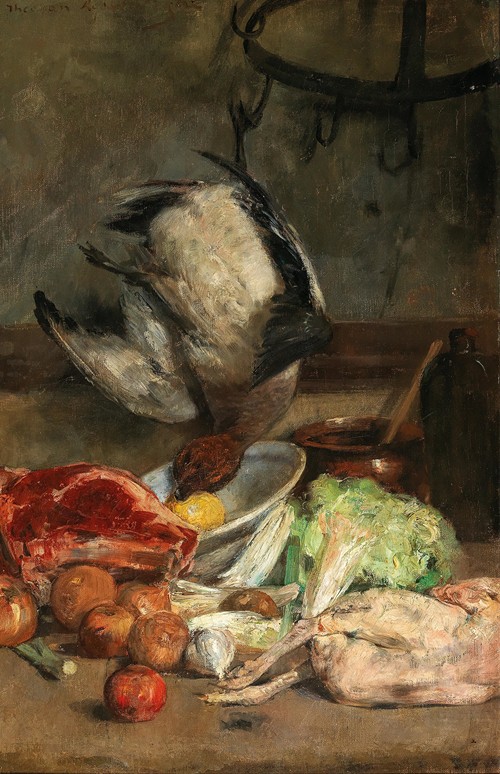 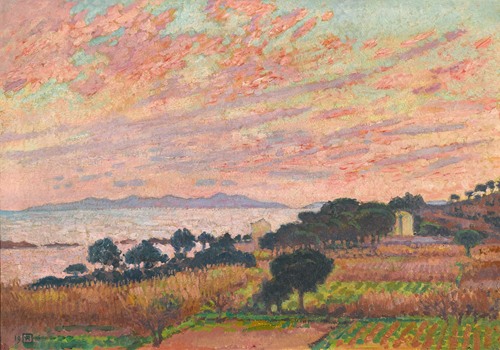 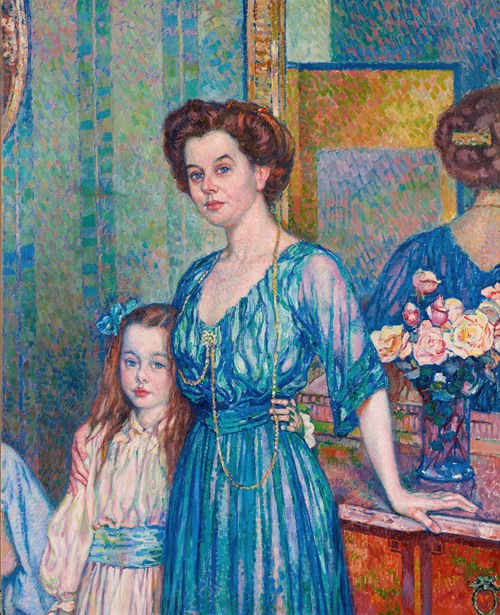 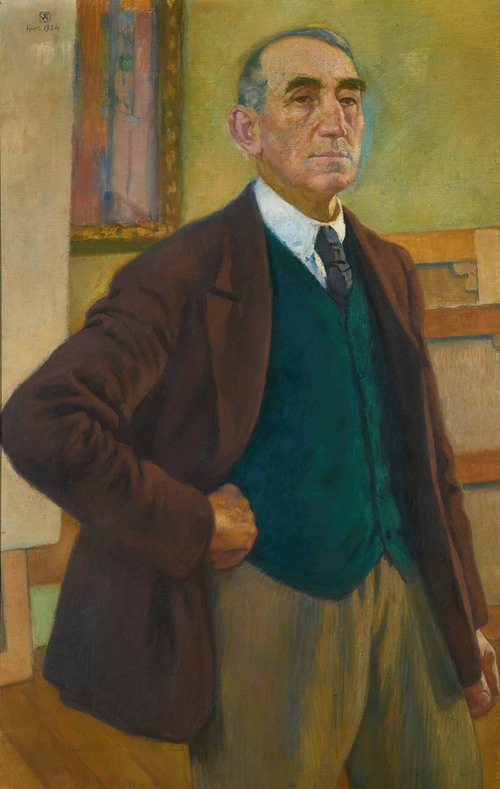 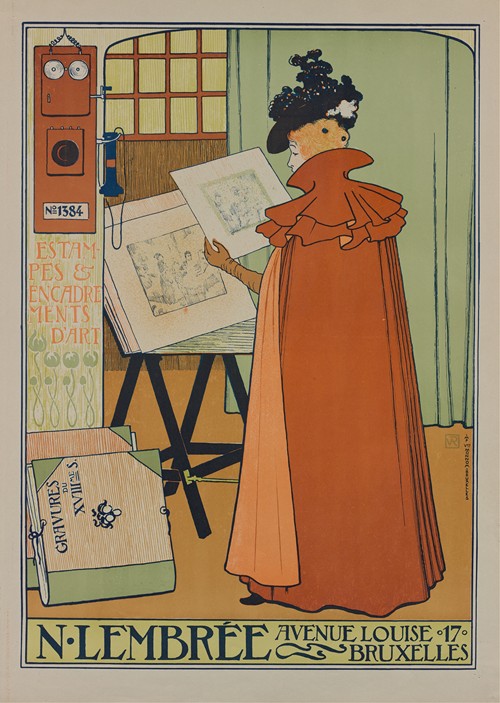 Poster for the Lembrée Gallery (1897) 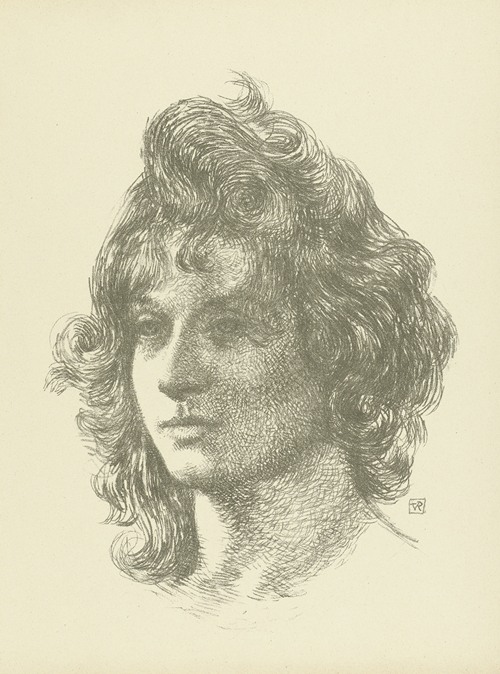 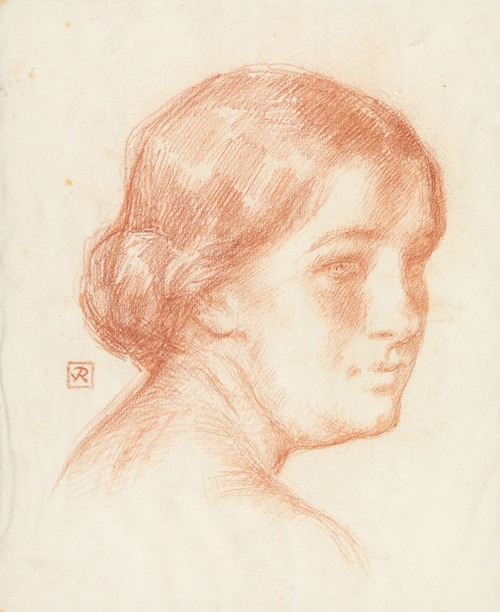