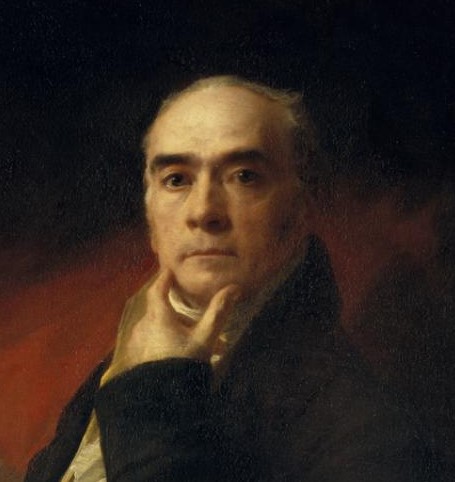 Raeburn was born the son of a manufacturer in Stockbridge, on the Water of Leith: a former village now within the city of Edinburgh. He had an older brother, born in 1744, called William Raeburn. His ancestors were believed to have been soldiers, and may have taken the name "Raeburn" from a hill farm in Annandale, held by Sir Walter Scott's family. Orphaned, he was supported by William and placed in Heriot's Hospital, where he received an education. At the age of fifteen he was apprenticed to the goldsmith James Gilliland of Edinburgh, and various pieces of jewellery, mourning rings and the like, adorned with minute drawings on ivory by his hand, still exist. When the medical student Charles Darwin died in 1778, his friend and professor Andrew Duncan took a lock of his student's hair to the jeweller whose apprentice, Raeburn, made a memorial locket.

Soon he took to the production of carefully finished portrait miniatures; meeting with success and patronage, he extended his practice to oil painting, at which he was self-taught. Gilliland watched the progress of his pupil with interest, and introduced him to David Martin, who had been the favourite assistant of Allan Ramsay the Latter, and was now the leading portrait painter in Edinburgh. Raeburn was especially aided by the loan of portraits to copy. Soon he had gained sufficient skill to make him decide to devote himself exclusively to painting. George Chalmers (1776; Dunfermline Town Hall) is his earliest known portrait.

In his early twenties, Raeburn was asked to paint the portrait of a young lady he had noticed when he was sketching from nature in the fields. Ann was the daughter of Peter Edgar of Bridgelands, and widow of Count James Leslie of Deanhaugh. Fascinated by the handsome and intellectual young artist, she became his wife within a month, bringing him an ample fortune. The acquisition of wealth did not affect his enthusiasm or his industry, but spurred him on to acquire a thorough knowledge of his craft. It was usual for artists to visit Italy, and Raeburn set off with his wife. In London he was kindly received by Sir Joshua Reynolds, the president of the Royal Academy, who advised him on what to study in Rome, especially recommending the works of Michelangelo, and gave Raeburn letters of introduction for Italy. In Rome he met his fellow Scot Gavin Hamilton, Pompeo Girolamo Batoni and Byers, an antique dealer whose advice proved particularly useful, especially the recommendation that "he should never copy an object from memory, but, from the principal figure to the minutest accessory, have it placed before him." After two years of study in Italy he returned to Edinburgh in 1787, and began a successful career as a portrait painter. In that year he executed a seated portrait of the second Lord President Dundas.

Examples of his earlier portraiture include a bust of Mrs Johnstone of Baldovie and a three-quarter-length of Dr James Hutton: works which, if somewhat timid and tentative in handling and not as confident as his later work, nevertheless have delicacy and character. The portraits of John Clerk, Lord Eldin, and of Principal Hill of St Andrews belong to a later period. Raeburn was fortunate in the time in which he practised portraiture. Sir Walter Scott, Hugh Blair, Henry Mackenzie, Lord Woodhouselee, William Robertson, John Home, Robert Fergusson, and Dugald Stewart were resident in Edinburgh, and were all painted by Raeburn. Mature works include his own portrait and that of the Rev. Sir Henry Moncrieff Wellwood, a bust of Dr Wardrop of Torbane Hill, two full-lengths of Adam Rolland of Gask, the remarkable paintings of Lord Newton and Dr Alexander Adam in the National Gallery of Scotland, and that of William Macdonald of St Martin's. Apart from himself, Raeburn painted only two artists, one of whom was Sir Francis Leggatt Chantrey, the most important and famous British sculptor of the first half of the 19th century. It has recently been revealed that Raeburn and Chantrey were close friends and that Raeburn took exceptional care over the execution of his portrait of the sculptor, one of the painter's mature bust-length masterpieces.

It was commonly believed that Raeburn was less successful in painting female portraits, but the exquisite full-length of his wife, the smaller likeness of Mrs R. Scott Moncrieff in the National Gallery of Scotland, and that of Mrs Robert Bell, and others, argue against this. Raeburn spent his life in Edinburgh, rarely visiting London, and then only for brief periods, thus preserving his individuality. Although he, personally, may have lost advantages resulting from closer association with the leaders of English art, and from contact with a wider public, Scottish art gained much from his disinclination to leave his native land. He became the acknowledged chief of the school which was growing up in Scotland during the early 19th century, and his example and influence at a critical period were of major importance. So varied were his other interests that sitters used to say of him, "You would never take him for a painter till he seizes the brush and palette."

In 1812 he was elected president of the Society of Artists in Edinburgh; and in 1814 associate, and in the following year full member, of the Royal Scottish Academy. On 29 August 1822 he received a knighthood during The visit of King George IV to Scotland and appointed His Majesty's limner for Scotland at the Earl of Hopetoun house. He died in Edinburgh not long after on 8 July 1823.

Raeburn had all the essential qualities of a popular and successful portrait painter. He was able to produce a telling and forcible likeness; his work is distinguished by powerful characterisation, stark realism, dramatic and unusual lighting effects, and swift and broad handling of the most resolute sort. David Wilkie recorded that, while travelling in Spain and studying the works of Diego Velázquez, the brushwork reminded him constantly of the "square touch" of Raeburn. Scottish physician and writer John Brown wrote that Raeburn "never fails in giving a likeness at once vivid, unmistakable and pleasing. He paints the truth, and he paints it with love".

Raeburn has been described as a "famously intuitive" portrait painter. He was unusual amongst many of his contemporaries, such as Reynolds, in the extent of his philosophy of painting directly from life; he made no preliminary sketches. This attitude partly explains the often coarse modelling and clashing colour combinations he employed, in contrast to the more refined style of Thomas Gainsborough and Reynolds. However these qualities and those mentioned above anticipate many of the later developments in painting of the 19th century from romanticism to Impressionism.

Sir Henry Raeburn died in St Bernard's House Stockbridge, Edinburgh. He is buried in St. Cuthbert's churchyard against the east wall (the monument erected by Raeburn in advance) but also has a secondary memorial in the Church of St John the Evangelist, Edinburgh.

His studio on York Place was taken over by the artist Colvin Smith. 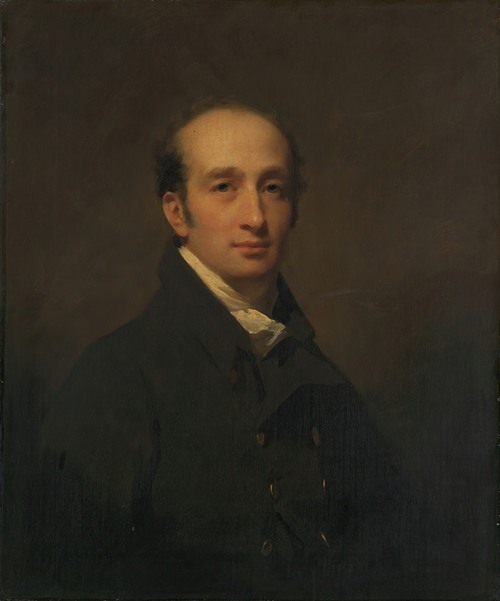 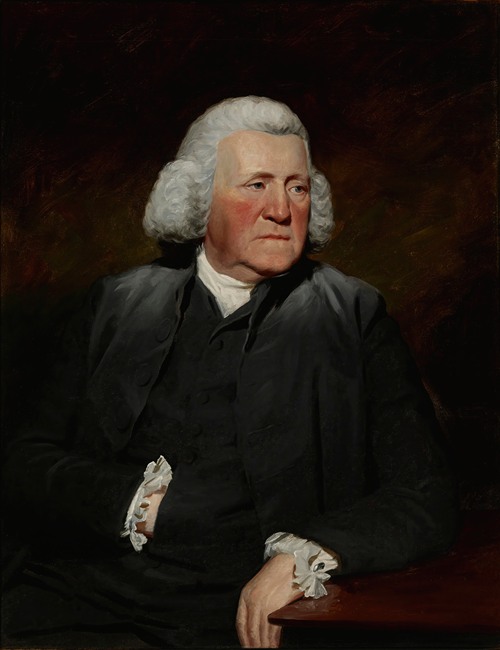 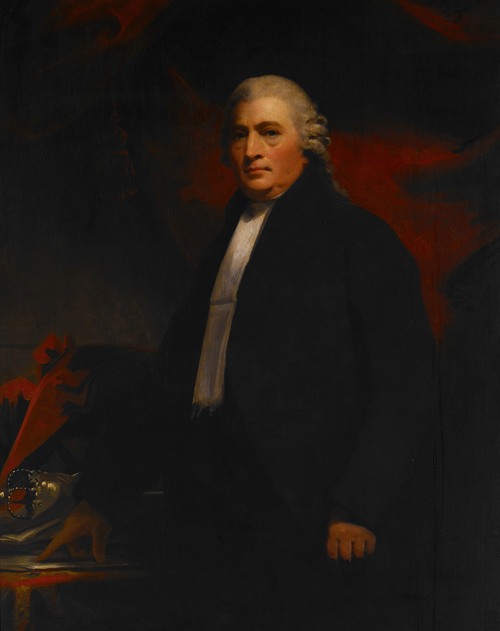 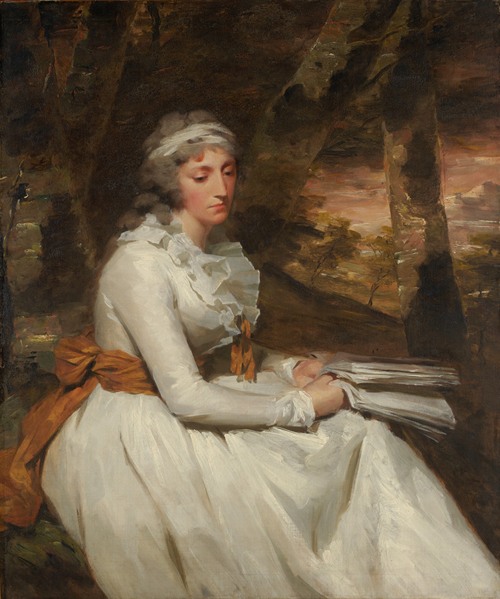 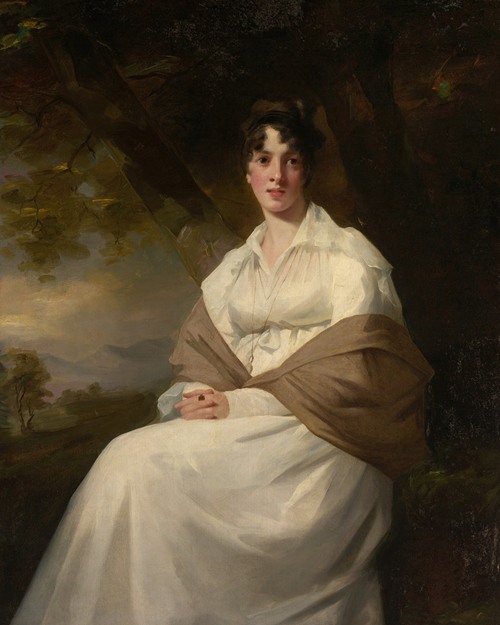 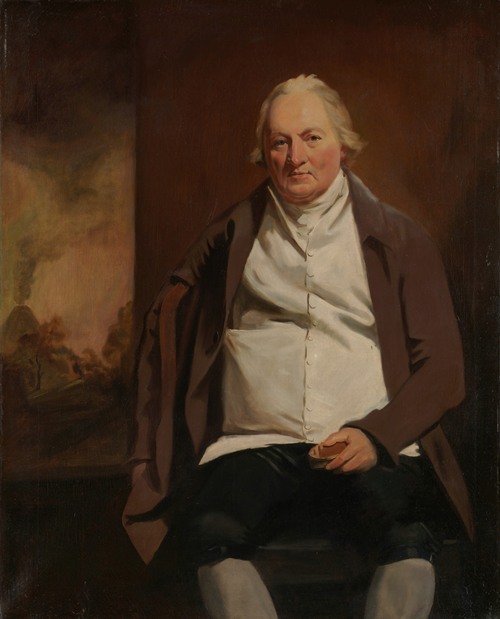 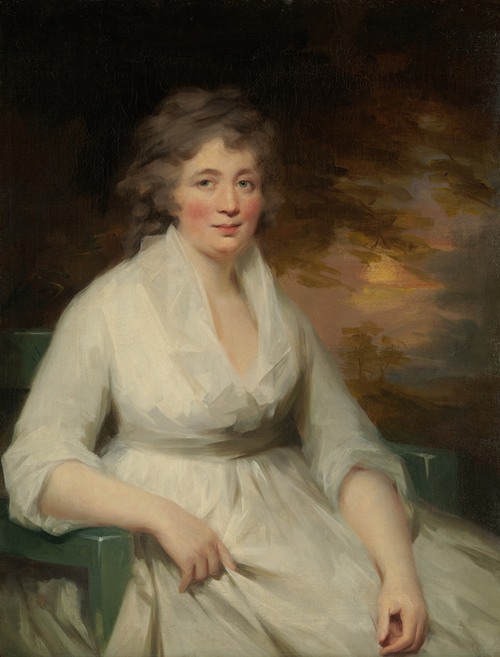 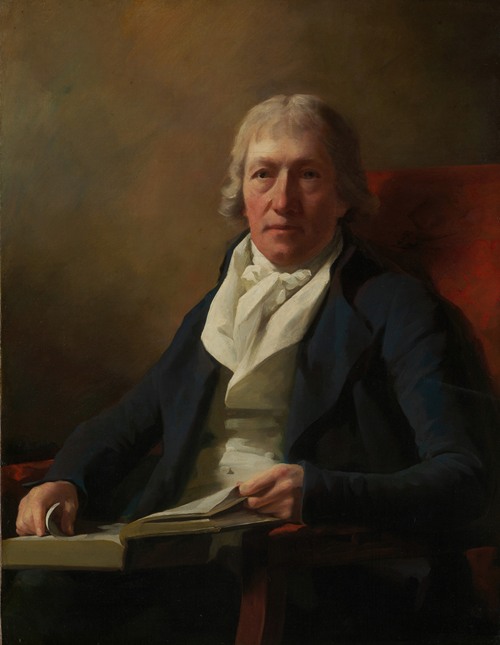 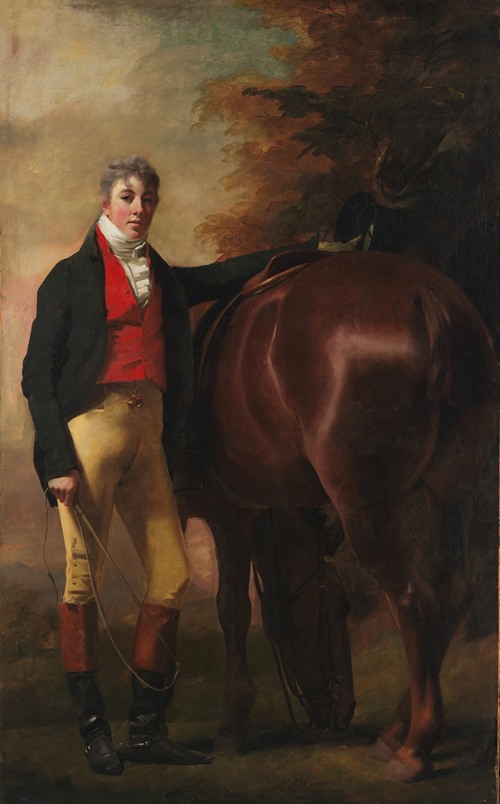 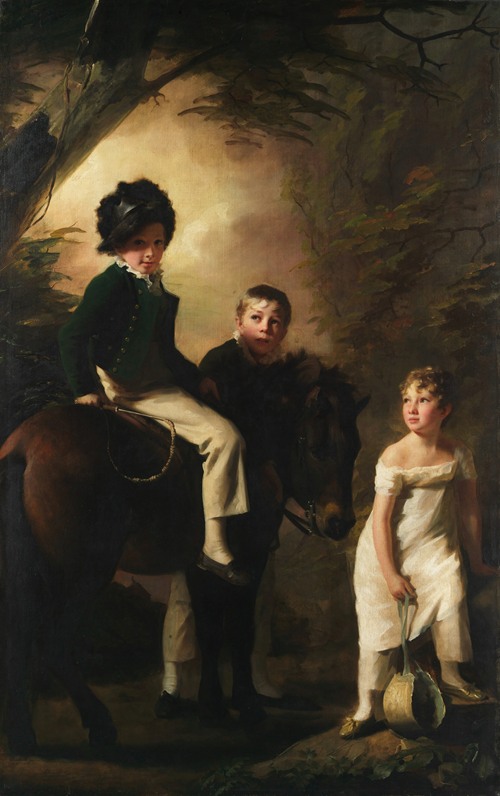 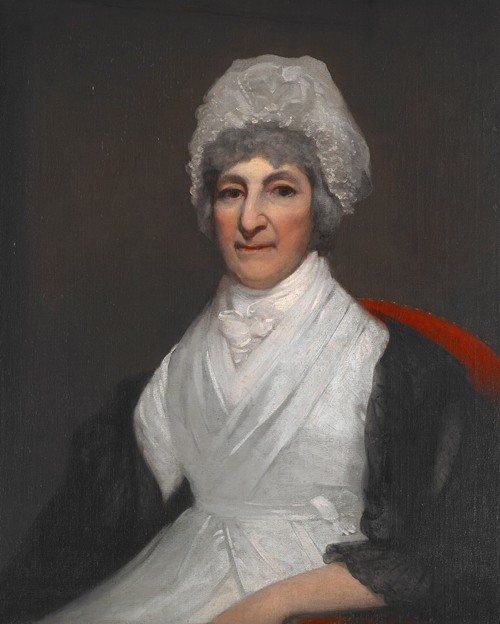 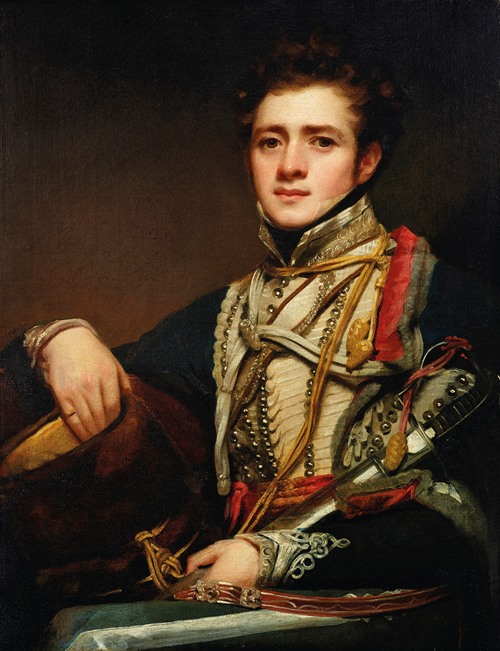 Lieutenant Colonel George Allan of the 16th Hussars, ‘The Hussar’ 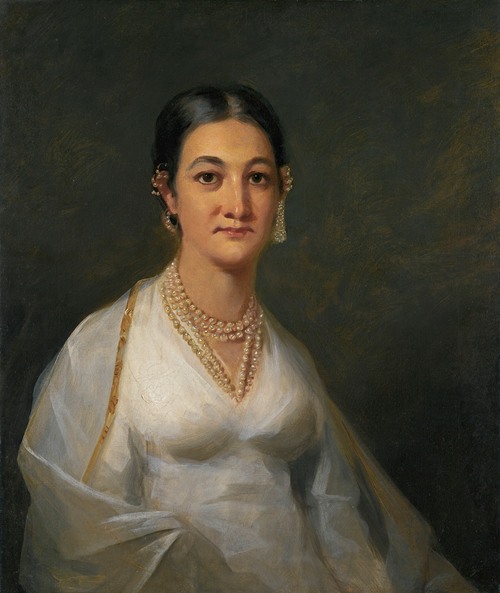 Portrait of a young indian woman 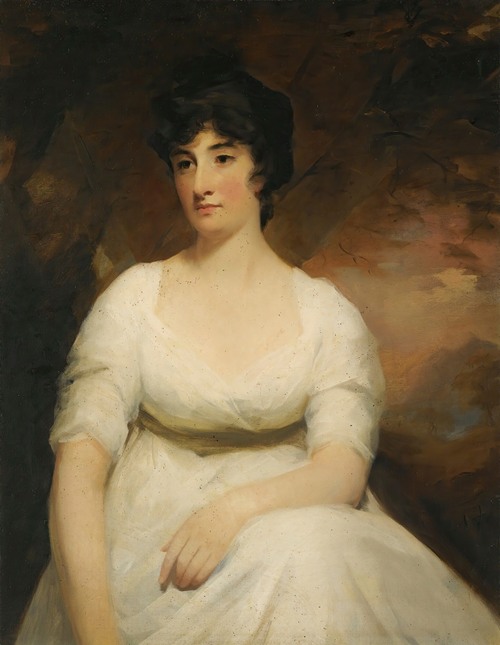 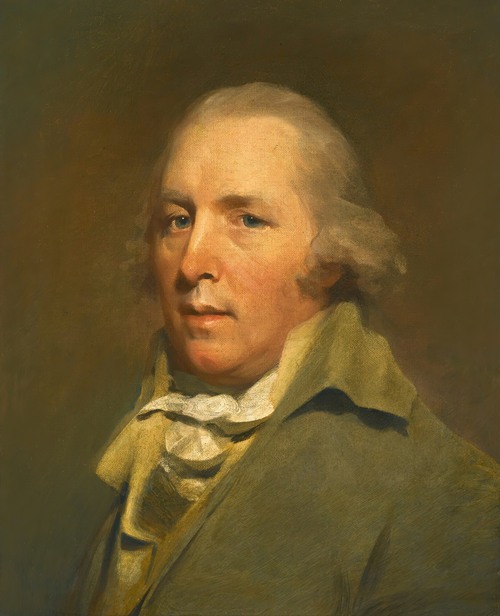 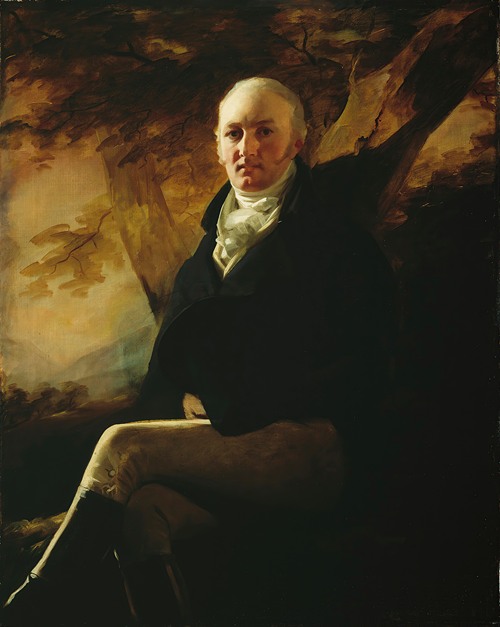 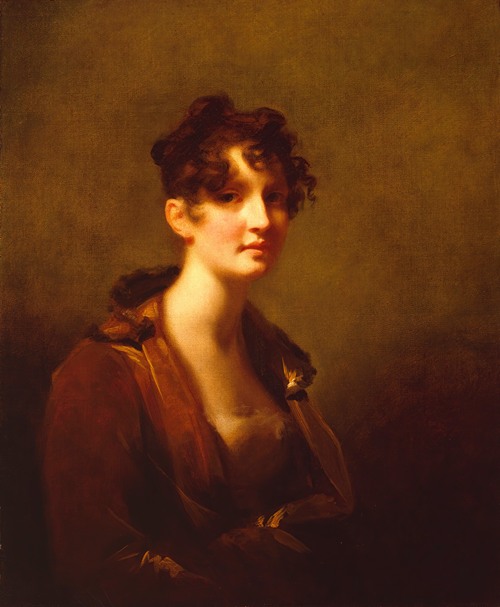 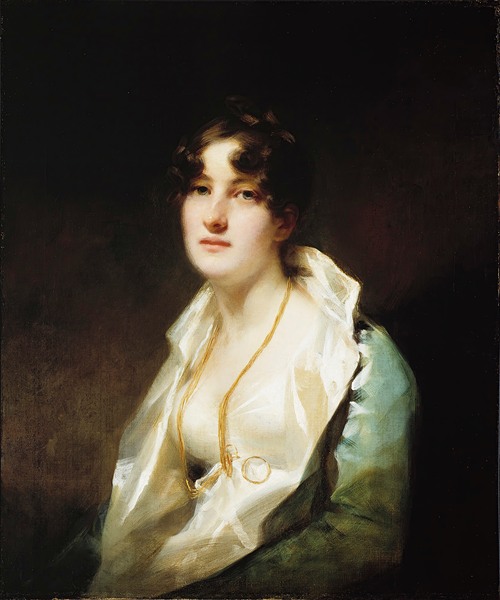 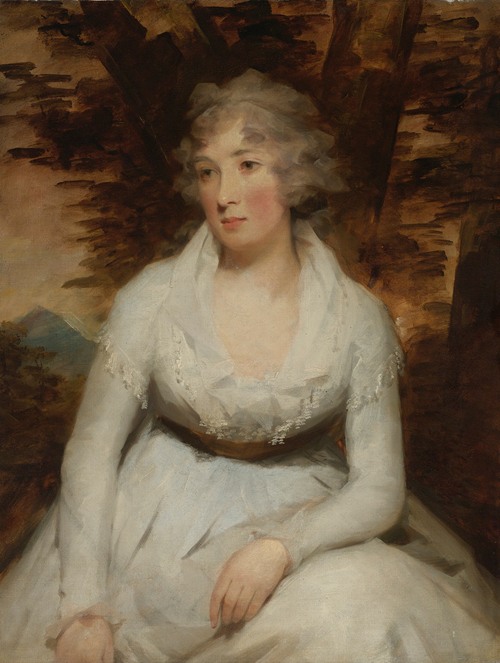 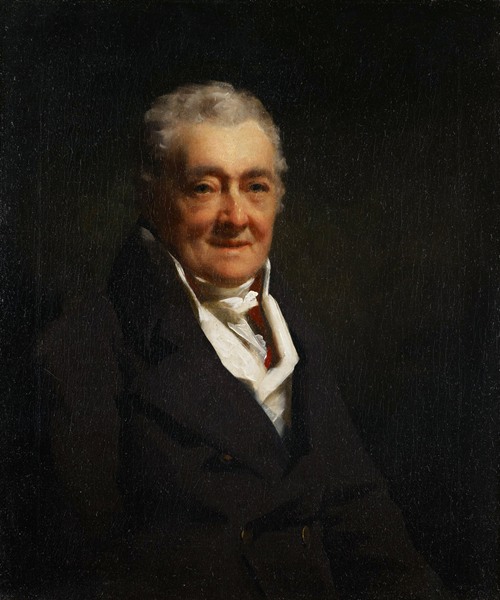 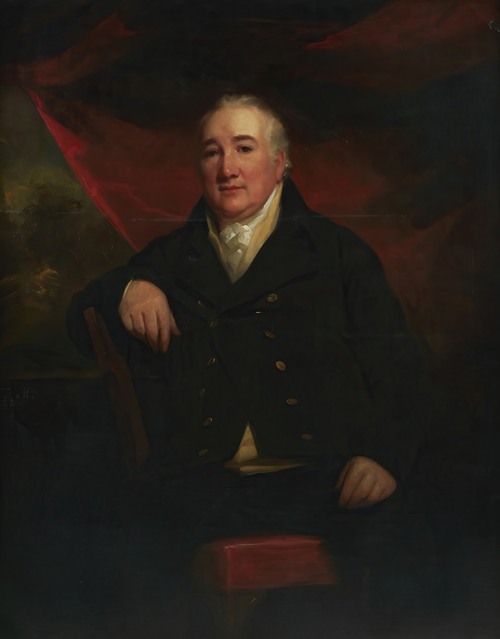 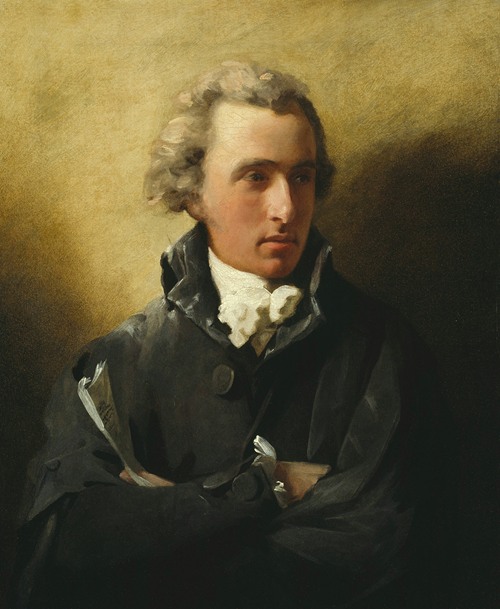 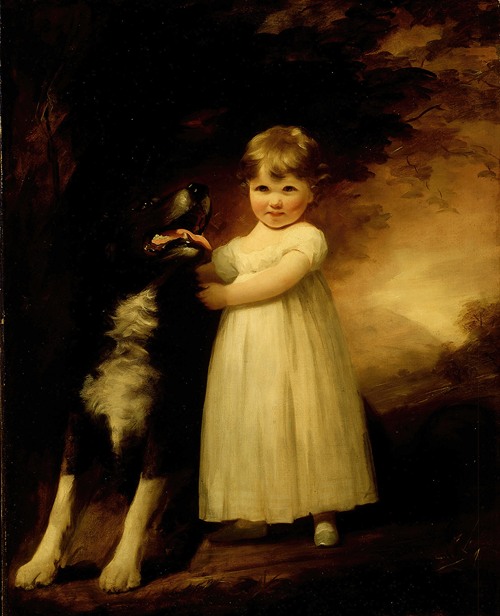 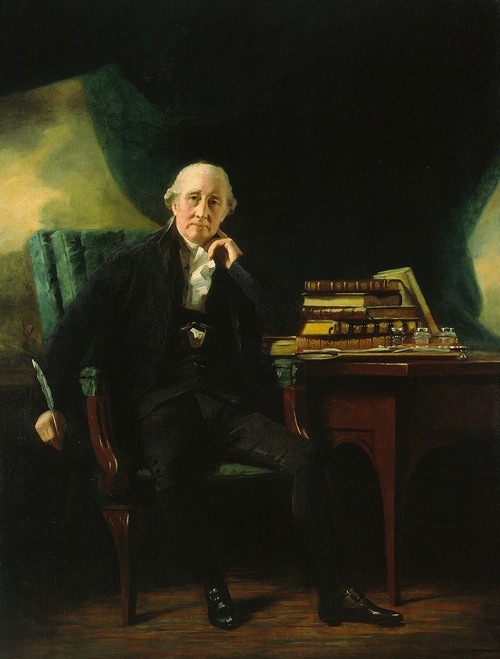 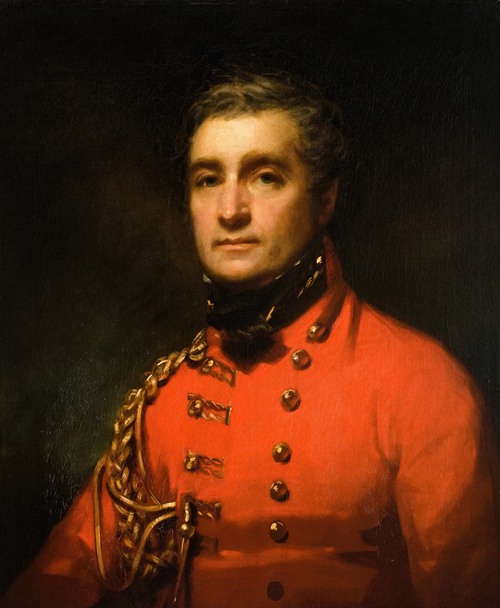