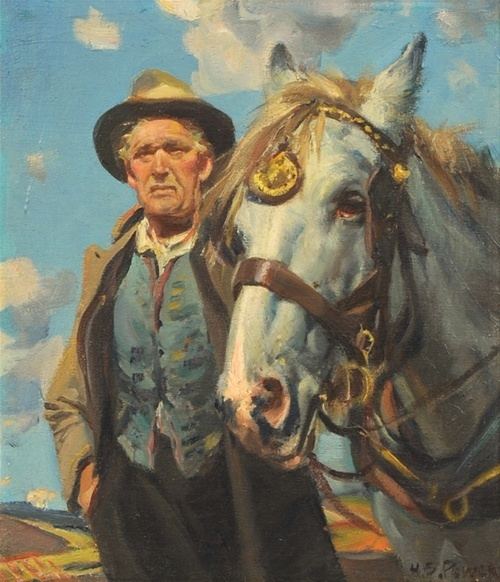 Harold Septimus Power was a New Zealand-born Australian artist, who was an official war artist for Australia in World War I.

Harold Septimus Power was born on 31 December 1877, in Dunedin, New Zealand to Peter Power, an Irish-born hatter, and his Scottish wife Jane. His family migrated to Australia whilst he was young. In his early teens he left the family home to pursue a life as an artist. His son's names are Harold and Hayden.

After varied occupations, Power moved to Adelaide where he began his art studies. He exhibited in 1899 with the Melbourne Art Club and soon after moved to Adelaide where he worked as an illustrator and political cartoonist for the Adelaide Observer, South Australian Register and the Adelaide Critic. In 1904, he was commissioned by the trustees of the Art Gallery of South Australia to paint an animal scene. On 17 September, of the same year, he married his first wife Isabel Laura Butterworth.

Between 1905 and 1907 Power studied at the Académie Julian in Paris, later settling in London. He became a member of the Royal Institute of Oil Painters and the Society of Animal Painters. During this time, he also exhibited at the Royal Academy of Arts. His first one-man exhibition took place at the Guild Hall in Melbourne, Australia in June 1913. During this exhibition he displayed oils and watercolours of rural landscapes that were used as backdrops for equine scenes and hunting.

After war broke out in the summer of 1914, the Australian government appointed official war artists to depict the activities of the Australian Imperial Force in the European theater of war. Power was appointed in 1917 and was attached to the 1st Division, A.I.F. from September to December of that year and then again in August the following year. Official War Artist during the First World War and was renowned for his depiction of animals, in particular horses, on the field of battle. After the war, Power was contracted by the Australian War Records Section for the next two decades.

The Battle Before Villers-Bretonneux, August 8th, 1918