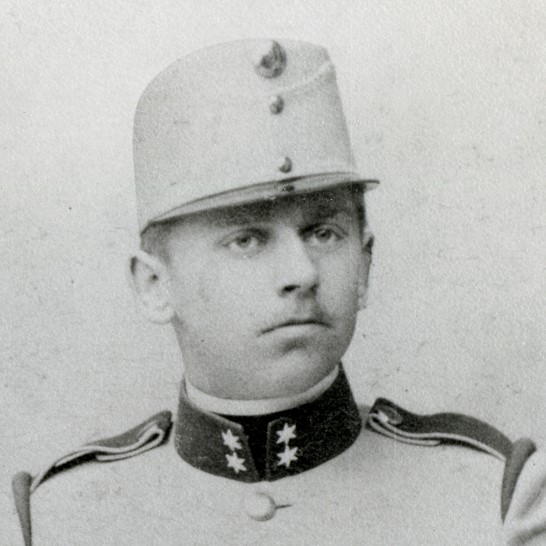 Rudolf Kalvach was born in Vienna in 1883. From 1905, he studied at the Kunstgewerbeschule (School of Arts and Crafts) in Vienna. He interrupted his studies due to private reasons and moved to Trieste, where his family had settled down. In 1910, the young artist came back to Vienna to finish his studies. As early as 1908, the magazine “Die grafischen Künste“ (“The Graphic Arts“) published an article about the Secession movement. Kalvach was mentioned in the article, where one of his woodcut pieces was reproduced. In the same year, the first part of his postcard series, which he had exclusively designed for Wiener Werkstätte, was published. His artistic postcards have a very satirical trait. Satire and social criticism defined Kalvach’s graphic work that was mostly created between 1908 and 1912.

His preferred technique was woodcutting, which he used to capture different aspects of the lives of the workers in the harbor of Trieste. Kalvach was also a very successful commercial artist. He designed posters for many Viennese industrial companies as well as a very expressive poster for the Kunstschau (Art show) 1908. This example reveals how related his style is to Oskar Kokoschka’s, although it was Kalvach who had influenced the young Kokoschka. Kalvach’s work was a pioneering force for the upcoming expressionism. From 1912, because of his schizophrenia, the artist was committed to a variety of mental institutions, first to Steinhof in Vienna and later to the Czech Kosmanos. In 1932, he died of tuberculosis in Kosmanos.