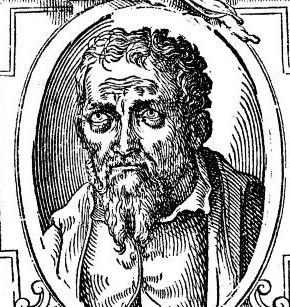 Jacopo Carucci, usually known as Jacopo da Pontormo, Jacopo Pontormo or simply Pontormo, was an Italian Mannerist painter and portraitist from the Florentine School. His work represents a profound stylistic shift from the calm perspectival regularity that characterized the art of the Florentine Renaissance. He is famous for his use of twining poses, coupled with ambiguous perspective; his figures often seem to float in an uncertain environment, unhampered by the forces of gravity.

Jacopo Carucci was born at Pontorme, near Empoli, to Bartolomeo di Jacopo di Martino Carrucci and Alessandra di Pasquale di Zanobi. Vasari relates how the orphaned boy, "young, melancholy and lonely", was shuttled around as a young apprentice:

Jacopo had not been many months in Florence before Bernardo Vettori sent him to stay with Leonardo da Vinci, and then with Mariotto Albertinelli, Piero di Cosimo, and finally, in 1512, with Andrea del Sarto, with whom he did not remain long, for after he had done the cartoons for the arch of the Servites, it does not seem that Andrea bore him any good will, whatever the cause may have been.

Pontormo painted in and around Florence, often supported by Medici patronage. A foray to Rome, largely to see Michelangelo's work, influenced his later style. Haunted faces and elongated bodies are characteristic of his work. An example of Pontormo's early style is a fresco depicting the Visitation of the Virgin and St Elizabeth, with its dancelike, balanced figures, painted from 1514 to 1516.

This early Visitation makes an interesting comparison with his painting of the same subject which was done about a decade later, now housed in the parish church of St. Michael Archangel in Carmignano, about 20 km west of Florence. Placing these two pictures together—one from his early style, and another from his mature period—throws Pontormo's artistic development into sharp relief. In the earlier work, Pontormo is much closer in style to his teacher, Andrea del Sarto, and to the early sixteenth century renaissance artistic principles. For example, the figures stand at just under half the height of the overall picture, and though a bit more crowded than true high renaissance balance would prefer, at least are placed in a classicizing architectural setting at a comfortable distance from the viewer. In the later work, the viewer is brought almost uncomfortably close to the Virgin and St. Elizabeth, who drift toward each other in clouds of drapery. Moreover, the clear architectural setting that is carefully constructed in earlier piece has been completely abandoned in favor of a peculiar nondescript urban setting.

The Joseph canvases (now in the National Gallery in London) offer another example of Pontormo's developing style. Done around the same time as the earlier Visitation, these works (such as Joseph in Egypt, at left) show a much more mannerist leaning. According to Giorgio Vasari, the sitter for the boy seated on a step is his young apprentice, Bronzino.

In the years between the SS Annunziata and San Michele Visitations, Pontormo took part in the fresco decoration of the salon of the Medici country villa at Poggio a Caiano (1519–20), 17 km NNW of Florence. There he painted frescoes in a pastoral genre style, very uncommon for Florentine painters; their subject was the obscure classical myth of Vertumnus and Pomona in a lunette.

In 1522, when the plague broke out in Florence, Pontormo left for the Certosa di Galluzzo, a cloistered Carthusian monastery where the monks followed vows of silence. He painted a series of frescoes, now quite damaged, on the passion and resurrection of Christ. These frescoes reveal especially strongly the influence of Albrecht Dürer's engravings, which often provided inspiration to Pontormo after he returned to Florence.

Vasari's Life of Pontormo depicts him as withdrawn and steeped in neurosis while at the center of the artists and patrons of his lifetime. This image of Pontormo has tended to color the popular conception of the artist, as seen in the film of Giovanni Fago, Pontormo, a heretical love. Fago portrays Pontormo as mired in a lonely and ultimately paranoid dedication to his final Last Judgment project, which he often kept shielded from onlookers. Yet as the art historian Elizabeth Pilliod has pointed out, Vasari was in fierce competition with the Pontormo/Bronzino workshop at the time when he was writing his Lives of the Most Excellent Painters, Sculptors, and Architects. This professional rivalry between the two bottegas could well have provided Vasari with ample motivation for running down the artistic lineage of his opponent for Medici patronage.

Perhaps as a result of Vasari's derision, or perhaps because of the vagaries of aesthetic taste, Pontormo's work was quite out of fashion for several centuries. The fact that so much of his work has been lost or severely damaged is testament to this neglect, though he has received renewed attention by contemporary art historians. Indeed, between 1989 and 2002, Pontormo's Portrait of a Halberdier (at right), held the title of the world's most expensive painting by an Old Master.

Regardless as to the veracity of Vasari's account, it is certainly true that Pontormo's artistic idiosyncrasies produced a style that few were able (or willing) to imitate, with the exception of his closest pupil Bronzino. Bronzino's early work is so close to that of his teacher, that the authorship of several paintings from the 1520s and '30s is still under dispute—for example, the four tondi containing the Evangelists in the Capponi Chapel, and the Portrait of a Lady in Red now in Frankfurt.

Pontormo shares some of the mannerism of Rosso Fiorentino and of Parmigianino. In some ways he anticipated the Baroque as well as the tensions of El Greco. His eccentricities also resulted in an original sense of composition. At best, his compositions are cohesive. The figures in the Deposition, for example, appear to sustain each other: removal of any one of them would cause the edifice to collapse. In other works, as in the Joseph canvases, the crowding makes for a confusing pictorial melee. It is in the later drawings that we see a graceful fusion of bodies in a composition which includes the oval frame of Jesus in the Last Judgement. 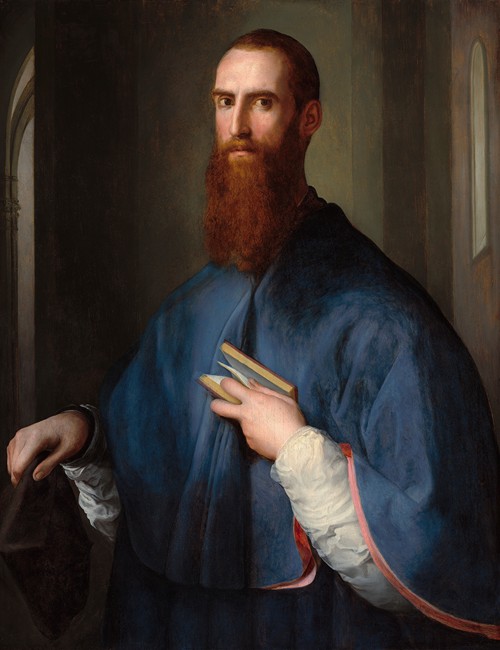 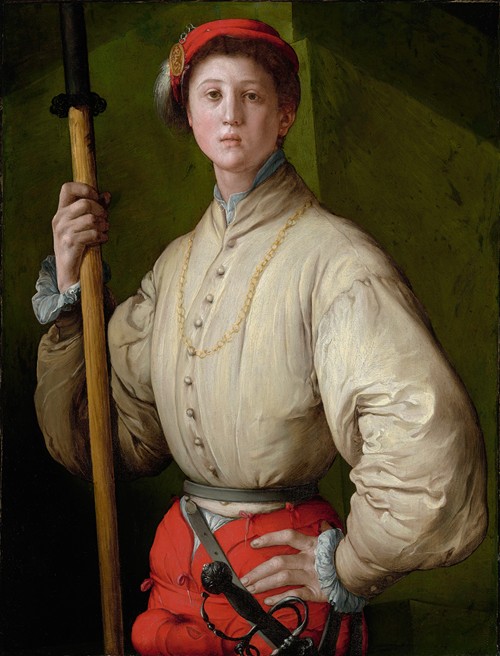 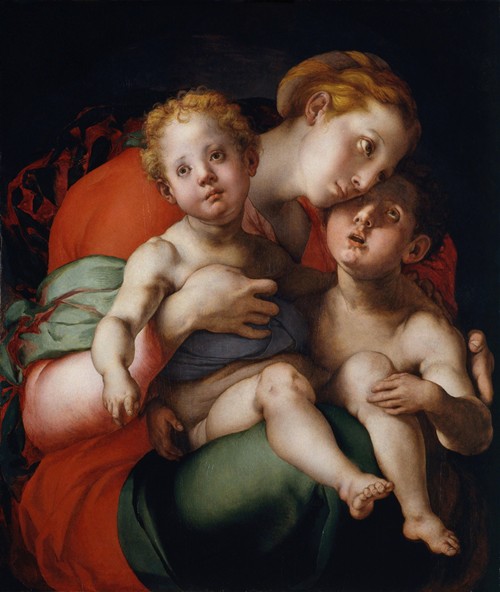 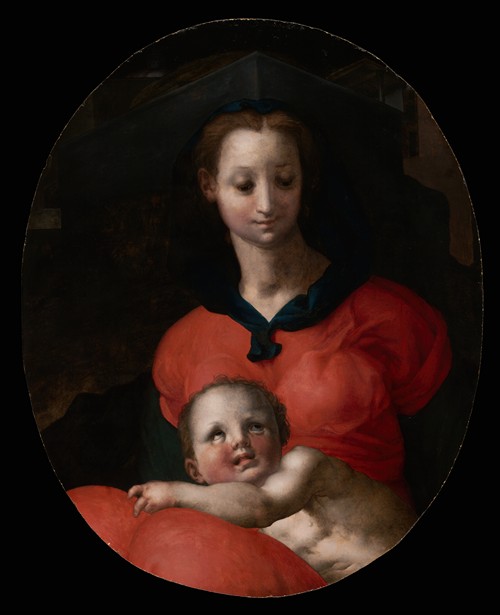 Marcus Curtius Leaping Into The Abyss 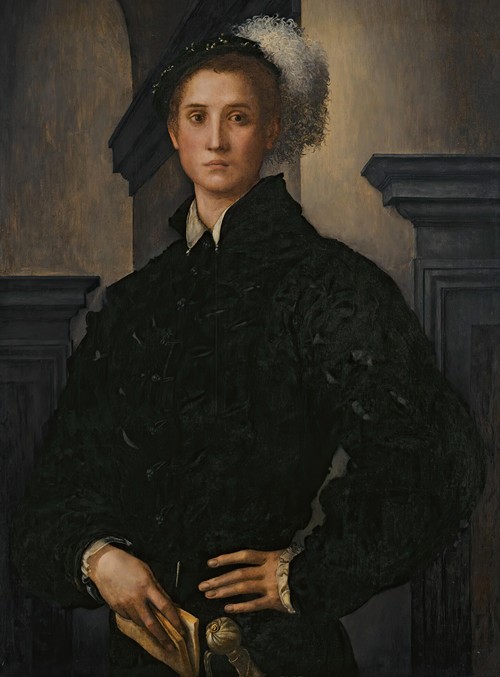 Portrait Of Cosimo I De Medici 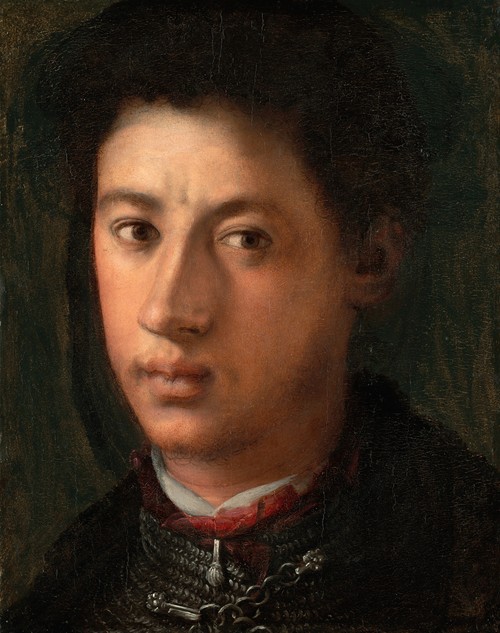 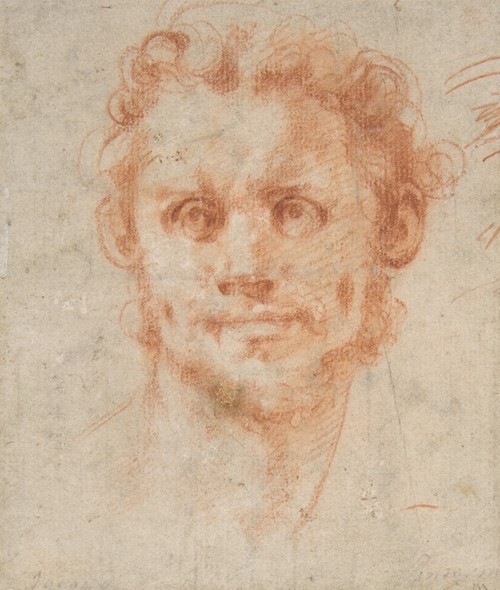 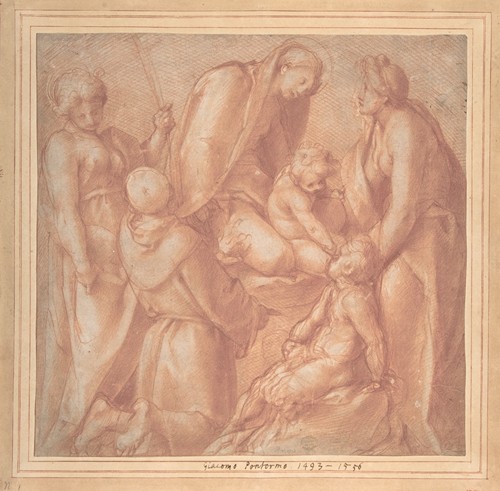 Virgin and Child with Saint Elizabeth, the Infant Baptist, Saint Anthony of Padua, and a Female Martyr (1514–22) 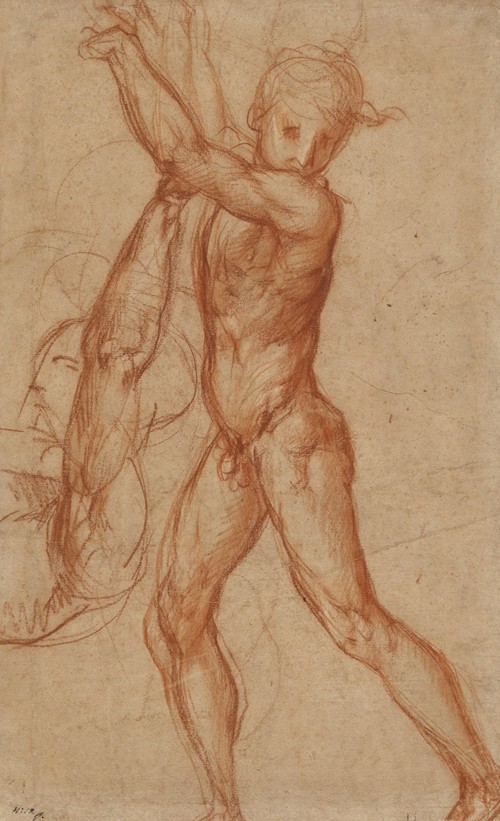 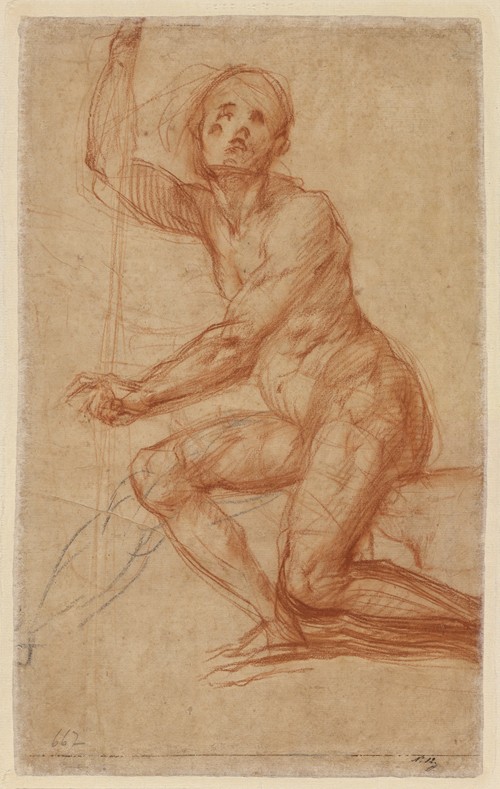 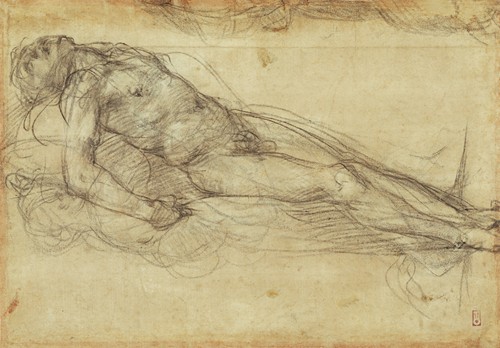 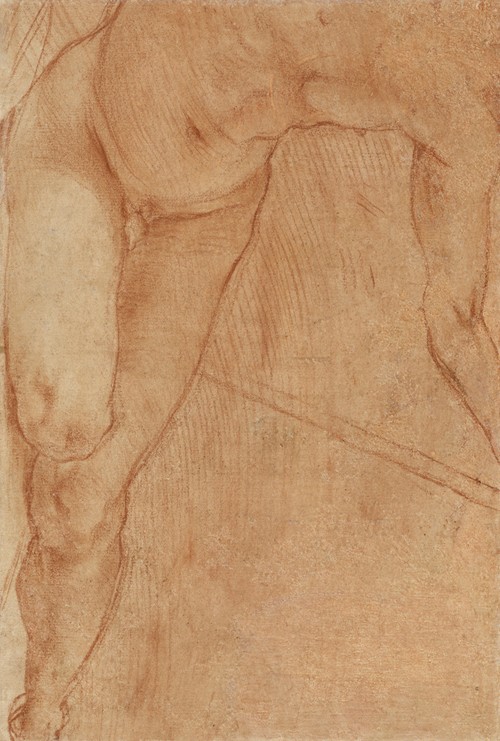 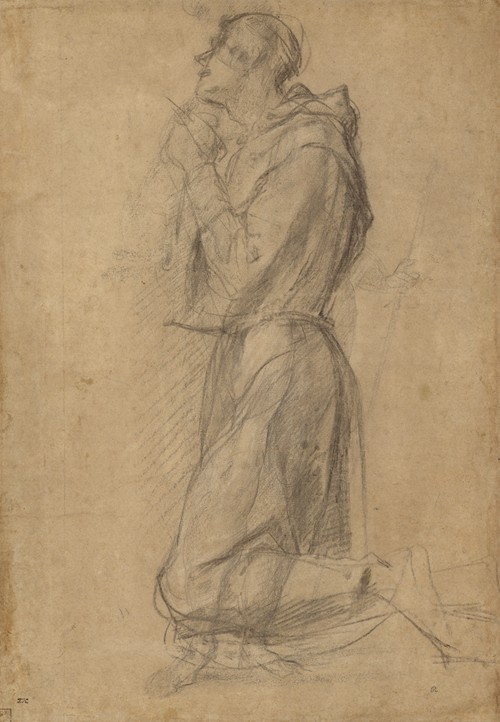 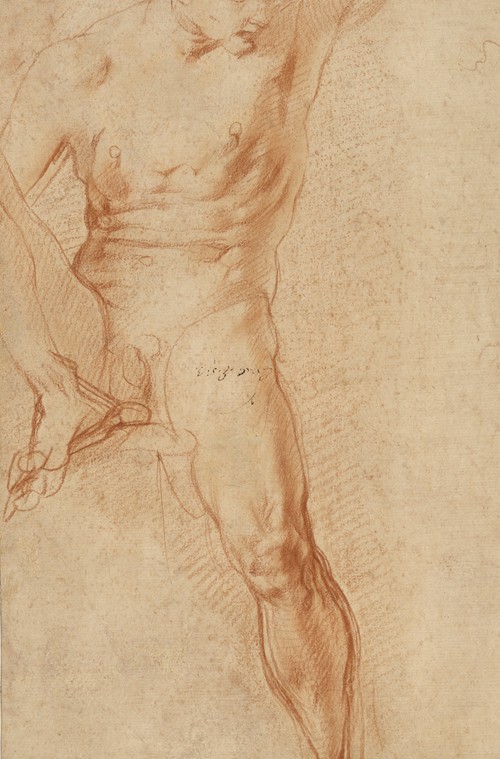