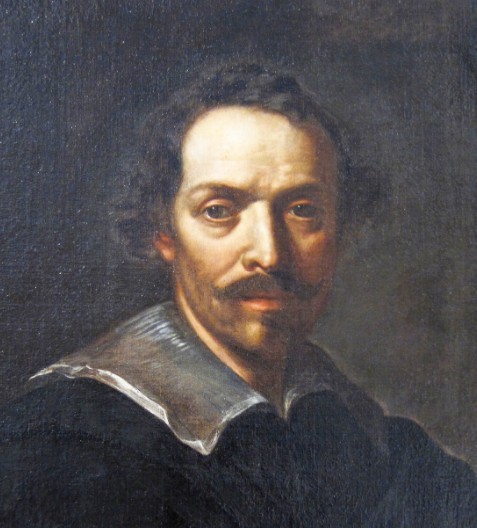 Pietro da Cortona was an Italian Baroque painter and architect. Along with his contemporaries and rivals Gian Lorenzo Bernini and Francesco Borromini, he was one of the key figures in the emergence of Roman Baroque architecture. He was also an important designer of interior decorations.

He was born Pietro Berrettini, but is primarily known by the name of his native town of Cortona in Tuscany. He worked mainly in Rome and Florence. He is best known for his frescoed ceilings such as the vault of the salone or main salon of the Palazzo Barberini in Rome and carried out extensive painting and decorative schemes for the Medici family in Florence and for the Oratorian fathers at the church of Santa Maria in Vallicella in Rome. He also painted numerous canvases. Only a limited number of his architectural projects were built but nonetheless they are as distinctive and as inventive as those of his rivals.

Berrettini was born into a family of artisans and masons, in Cortona, then a town in the Grand Duchy of Tuscany. He trained in painting in Florence under Andrea Commodi, but soon he departed for Rome at around 1612/3, where he joined the studio of Baccio Ciarpi. He was involved in fresco decorations at the Palazzo Mattei in 1622-3 under the direction of Agostino Ciampelli and Cardinal Orsini had commissioned from him an Adoration of the Shepherds (c. 1626) for San Salvatore in Lauro.

In Rome, he had encouragement from many prominent patrons. According to Cortona's biographers his gifted copy of Raphael's Galatea fresco brought him to the attention of Marcello Sacchetti [sv], papal treasurer during the Barberini papacy. Such contacts helped him gain an early major commission in Rome (1624–1626), a fresco decoration in the church of Santa Bibiana that was being renovated under the direction of Bernini. In 1626, the Sacchetti family engaged Cortona to paint three large canvases of The Sacrifice of Polyxena, The Triumph of Bacchus, and The Rape of the Sabines (the latter, c. 1629), and to paint a series of frescoes in the Villa Sacchetti at Castelfusano, near Ostia, using a team that included the young Andrea Sacchi. In the Sacchetti orbit, he met Pope Urban VIII and Cardinal Francesco Barberini, the papal nephew, and their patronage of Cortona provided him with ample scope to demonstrate his abilities as a painter of frescoes and canvases.

In 1633, Pope Urban VIII (Maffeo Barberini) commissioned from Cortona a large fresco painting for the main salon ceiling of the Barberini family palace; the Palazzo Barberini. It was completed six years later, following Cortona's influential visit to northern Italy where he would have seen at first hand perspectival works by Paolo Veronese and the colour palette of Titian.

Cortona's huge Allegory of Divine Providence and Barberini Power marks a watershed in Baroque painting. Following the architecture of the room, he created the painted illusion of an open airy architectural framework against which figures are situated, usually seen 'al di sotto in su' apparently coming into the room itself or floating far above it. The ornamented architectural framework essentially forms five compartments. The central and most significant part celebrates the glorification of the reign of Urban VIII in a light filled scene populated with allegorical figures and Barberini family emblems.

Cortona had been patronized by the Tuscan community in Rome, hence it was not surprising when he was passing through Florence in 1637, that he should be asked by Grand Duke Ferdinando II de' Medici to paint a series of frescoes intended to represent Ovid's Four Ages of Man in the small Sala della Stufa, a room in the Palazzo Pitti. The first two frescoes represented the "ages" of gold and silver. In 1641, he was recalled to paint the 'Bronze Age' and 'Iron Age' frescoes. It is said he was guided in the formulation of the allegorical designs by Michelangelo Buonarroti the Younger.

He thus began work on the decoration of the grand-ducal reception rooms on the first floor of the Palazzo Pitti, now part of the Palatine Gallery. In these five Planetary Rooms, the hierarchical sequence of the deities is based on Ptolomeic cosmology; Venus, Apollo, Mars, Jupiter (the Medici Throne room) and Saturn, but minus Mercury and the Moon which should have come before Venus. These highly ornate ceilings with frescoes and elaborate stucco work essentially celebrate the Medici lineage and the bestowal of virtuous leadership. Pietro left Florence in 1647 to return to Rome, and his pupil and collaborator, Ciro Ferri, was left to complete the cycle by the 1660s.

For a number of years, Cortona was involved for decades in the decoration of the ceiling frescoes in the Oratorian Chiesa Nuova (Santa Maria in Vallicella) in Rome, a work not finished until 1665. Other frescoes are in Palazzo Pamphilj in Piazza Navona (1651–4).

In 1660, he executed The Stoning of Saint Stephen for the church of San Ambrogio della Massima in Rome. The work currently hangs in the Hermitage.

Towards the end of his life he devoted much of his time to architecture, but he published a treatise on painting in 1652 under a pseudonym and in collaboration. He refused invitations to both France and Spain.

Madonna with the Child, Saint Catherine and Saint John (between 1610 and 1620)

Madonna with the Child and angels (1625)

The Ecstasy of Saint Alessio

Saint Domitilla Receiving The Veil From Pope Clement I

The allume mines of Tolfa

Madonna and Child, Saint John the Baptist and Pope Stephen (1626)

Cybele before the Council of the Gods (1633)