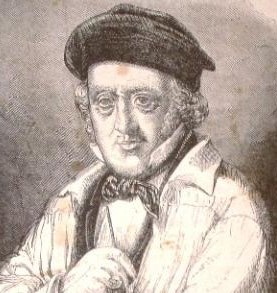 Natale Schiavone was an Italian painter and engraver, mainly depicting history and portraits. Many of his paintings depict seductive nubile women.

Schiavoni was born in Chioggia, near Venice, and is claimed by Perkins to be a distant descendant of Andrea Schiavoni's, the Venetian painter. In Venice, he trained with Francesco Maggiotto and later came under the influence of the Neoclassicism.

He was peripatetic, traveling in 1800 to Trieste, and in 1810 to Milan, where he painted Eugène de Beauharnais and the royal family. In Milan, he was able to frequent the studios of Appiani, Longhi, and Sabatelli. In 1816, Schiavoni was invited by the Austrian emperor to Vienna, to become the official portraitist for the court. From there, he returned to Venice in 1821, where he became professor at the Academy of Fine Arts. He resided in the Palazzo Giustinian on the Grand Canal.

He was described by Pietro Selvatico as in coloring, highly skillful, but in shading, inimitably supreme.

He died in Venice.

Psyche And The Eagle Of Zeus