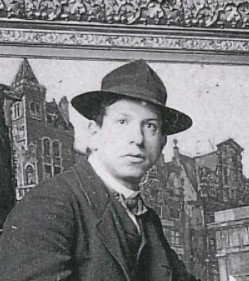 Martin Monnickendam was a Dutch painter and draftsman.
Monnickendam was born in Amsterdam and trained at the Rijksakademie van beeldende kunsten there from 1891. His early work is mostly animal drawings made at Natura Artis Magistra. He continued his studies in Paris at the École des Arts et Métiers from 1895. He won various awards and took study trips to London and Italy. Today his work is seen as being ín the school of George Breitner.

He became a member of Arti et Amicitiae in 1904 and a member of Vereeniging Sint Lucas in 1905. He became a teacher in Amsterdam at the international painting academy there. In 1924 on the occasion of his 50th birthday an honorary show was held for him at the Stedelijk Museum and in 1934 he was named officer in the Order of Orange-Nassau. His work was part of the art competitions at the 1924 Summer Olympics and the 1928 Summer Olympics.

He also won a medal at the Paris World Exposition in 1937. Monnickendam died in Amsterdam in straitened circumstances after being ostracized during the Nazi occupation as a Jew. In 2009 a show of his works was held in Amsterdam city archives.