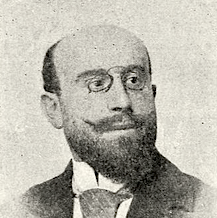 Ludwig Deutsch was an Austrian painter who settled in Paris and became a noted Orientalist artist.

Details of Ludwig Deutsch's life are obscure. He was born in Vienna in 1855 into a well-established Jewish family. His father Ignaz Deutsch was a financier at the Austrian court. He studied at the Vienna Academy of Fine Arts 1872–1875, then, in 1878, moved to Paris where he became strongly associated with Orientalism.

He received his early art training at Akademie der Bildenden Künste (Academy of Fine Arts Vienna) under the tutelage of Anselm Feuerbach (1875–1877). In 1877, when Feuerbach retired as a teacher, Deutsch and some others students attempted to enter the class of Leopold Carl Müller, who had moved to Paris in 1876, but initially were refused entry. In 1878 Deutsch was finally accepted. At around this time, he may also have studied with Jean-Paul Laurens. In Paris, Deutsch made the acqaintance of artists, Arthur von Ferraris, Jean Discart and Rudolf Ernst, who became his lifelong friend. Through these friendships, Deutsch developed an interest in Orientalist art. His first Orientalist painting was produced in 1881, some years before his first visit to Egypt.

In around 1880, he broke his contacts with Vienna and settled in Paris. He established a studio at Rue Le Pelletier in Paris and began to exhibit paintings with much success.

Though his earliest Orientalist subjects appeared in 1881, Deutsch's first documented journeys to the Middle East were made in 1885, 1890, and 1898, when he visited Egypt. Throughout the 1890s, he visited Egypt at least three times. Like many of his contemporaries, he found inspiration in the North African light, colours, scenery and customs. He collected a vast quantity of Oriental objects, including tiles, furniture, arms, pipes, fabrics, and costumes which he would subsequently used in his paintings.

His early work focused primarily on historical subjects, but after visiting Egypt, he concentrated on Orientalist scenes. He was particularly interested in capturing the rich, opulent scenes of the Palace and its environs. The detail in his paintings is excellent. He was prolific, producing many paintings with the same theme – prayers, guards, musicians, street vendors etc. In order to produce paintings in large volume, he created a virtual assembly line approach, using the same settings with different subjects and activities to create an impression of variety. Many of Ludwig Deutsch's paintings are now in the Shafik Gabr Collection. Amongst his best known works are: The Scribe, painted 6 years after Paul Joanowits did Bashi-Bazouks Before a Gateway but in the same location, and Musical Interlude. Among Austrian Orientalist painters, his works are considered to be some of the most sought after by collectors.

A Council Of Elders

A musician and a guardsman in an oriental interior