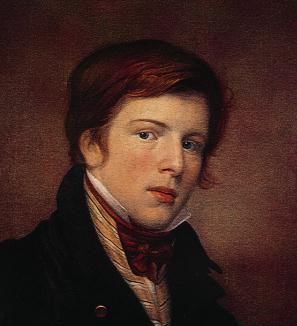 Leopold Kupelwieser was an Austrian painter, often associated with the Nazarene movement.

He was the son of Johann Baptist Georg Kilian Kupelwieser (1760–1813), co-owner of a factory that produced tableware. His talents were recognized at an early age by the sculptor Franz Anton von Zauner and by the time he was twelve, he was already attending the Academy of Fine Arts, Vienna.

During a stay in Rome in 1824, he came under the influence of Friedrich Overbeck and the Nazarene movement. After the death of Alexei Sergeyevich Berezin [ru], a Russian nobleman who had been his patron there, he returned to Vienna and earned his living primarily as an illustrator and portrait painter, although he is also known to have painted shop signs.

His brother was the theatrical director Joseph Kupelwieser, who wrote the libretto for Schubert's opera Fierrabras. With his brother, Joseph, he was a member of the "Schubertianern" (friends of Franz Schubert), a group that often got together for summers at the Schloss Atzenbrugg, west of Vienna. In 1826, Leopold married Maria Johanna Evangelista Augustina Stephania Theodora Lutz, an occasion which was marked by Schubert's composition, the "Kupelwieser Waltz" (never written down, but passed along by the family and later transcribed by Richard Strauss).

In 1837, he became Professor of history painting at the Academy and, in 1850, was awarded the Knight's Cross of the Order of Franz Joseph. Virtually all of his later work involved religious altarpieces and frescoes. At the age of sixty he fell ill, apparently due to the rigors of painting on wet lime, and never recovered his health.

Portrait of Anton Ritter Mantz von Mariensee (Mantua 1757-1830 Bad Ischl), owner of a mine and smelting works in the Bukovina (1826)