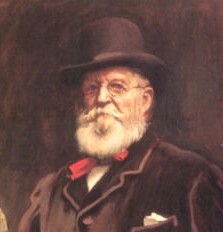 Gyr Falcons On A Rocky Ledge

A Gyrfalcon In An Extensive Mountainous Landscape