Jean-Honoré Fragonard was a French painter and printmaker whose late Rococo manner was distinguished by remarkable facility, exuberance, and hedonism. One of the most prolific artists active in the last decades of the Ancien Régime, Fragonard produced more than 550 paintings (not counting drawings and etchings), of which only five are dated. Among his most popular works are genre paintings conveying an atmosphere of intimacy and veiled eroticism.

Jean-Honoré Fragonard was born at Grasse, Alpes-Maritimes, the son of François Fragonard, a glover, and Françoise Petit. Fragonard was articled to a Paris notary when his father's circumstances became strained through unsuccessful speculations, but showed such talent and inclination for art that he was taken at the age of eighteen to François Boucher. Boucher recognized the youth's rare gifts but, disinclined to waste his time with one so inexperienced, sent him to Chardin's atelier. Fragonard studied for six months under the great luminist, then returned more fully equipped to Boucher, whose style he soon acquired so completely that the master entrusted him with the execution of replicas of his paintings.

Though not yet a student of the Academy, Fragonard gained the Prix de Rome in 1752 with a painting of Jeroboam Sacrificing to the Golden Calf, but before proceeding to Rome he continued to study for three years under Charles-André van Loo. In the year preceding his departure he painted the Christ washing the Feet of the Apostles now at Grasse Cathedral. On 17 September 1756, he took up his abode at the French Academy in Rome, then presided over by Charles-Joseph Natoire.

While at Rome, Fragonard contracted a friendship with a fellow painter, Hubert Robert. In 1760, they toured Italy together, executing numerous sketches of local scenery. It was in these romantic gardens, with their fountains, grottos, temples and terraces, that Fragonard conceived the dreams which he was subsequently to render in his art. He also learned to admire the masters of the Dutch and Flemish schools (Rubens, Hals, Rembrandt, Ruisdael), imitating their loose and vigorous brushstrokes. Added to this influence was the deep impression made upon his mind by the florid sumptuousness of Giovanni Battista Tiepolo, whose works he had an opportunity to study in Venice before he returned to Paris in 1761.

In 1765 his Coresus et Callirhoe secured his admission to the Academy. It was made the subject of a pompous (though not wholly serious) eulogy by Diderot, and was bought by the king, who had it reproduced at the Gobelins factory. Hitherto Fragonard had hesitated between religious, classic and other subjects; but now the demand of the wealthy art patrons of Louis XV's pleasure-loving and licentious court turned him definitely towards those scenes of love and voluptuousness with which his name will ever be associated, and which are only made acceptable by the tender beauty of his color and the virtuosity of his facile brushwork; such works include the Blind Man's Bluff (Le collin maillard), Serment d'amour (Love Vow), Le Verrou (The Bolt), La Culbute (The Tumble), La Chemise enlevée (The Shirt Removed), and L'escarpolette (The Swing, Wallace Collection), and his decorations for the apartments of Mme du Barry and the dancer Madeleine Guimard. The portrait of Denis Diderot (1769) has recently had its attribution to Fragonard called into question.

A lukewarm response to these series of ambitious works induced Fragonard to abandon Rococo and to experiment with Neoclassicism. He married Marie-Anne Gérard, herself a painter of miniatures, (1745–1823) on 17 June 1769 and had a daughter, Rosalie Fragonard (1769–1788), who became one of his favourite models. In October 1773, he again went to Italy with Pierre-Jacques Onézyme Bergeret de Grancourt and his son, Pierre-Jacques Bergeret de Grancourt. In September 1774, he returned through Vienna, Prague, Dresden, Frankfurt and Strasbourg.

Back in Paris Marguerite Gérard, his wife's 14-year-old sister, became his student and assistant in 1778. In 1780, he had a son, Alexandre-Évariste Fragonard (1780–1850), who eventually became a talented painter and sculptor. The French Revolution deprived Fragonard of his private patrons: they were either guillotined or exiled. The neglected painter deemed it prudent to leave Paris in 1790 and found shelter in the house of his cousin Alexandre Maubert at Grasse, which he decorated with the series of decorative panels known as the Les progrès de l'amour dans le cœur d'une jeune fille, originally painted for Château du Barry.

Fragonard returned to Paris early in the nineteenth century, where he died in 1806, almost completely forgotten. 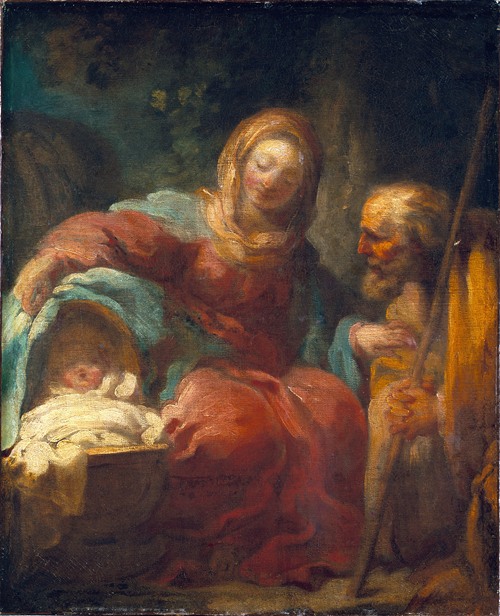 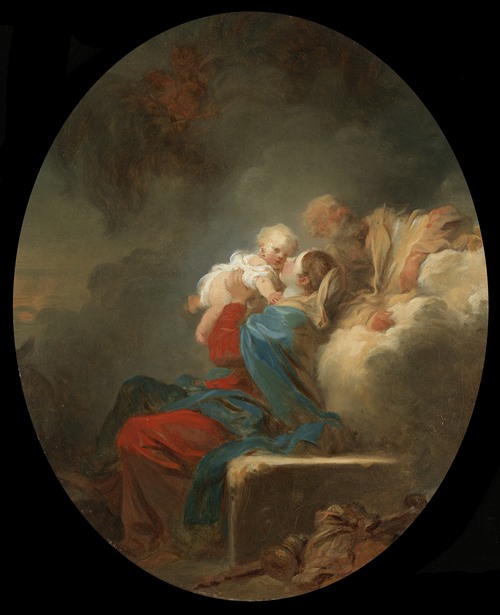 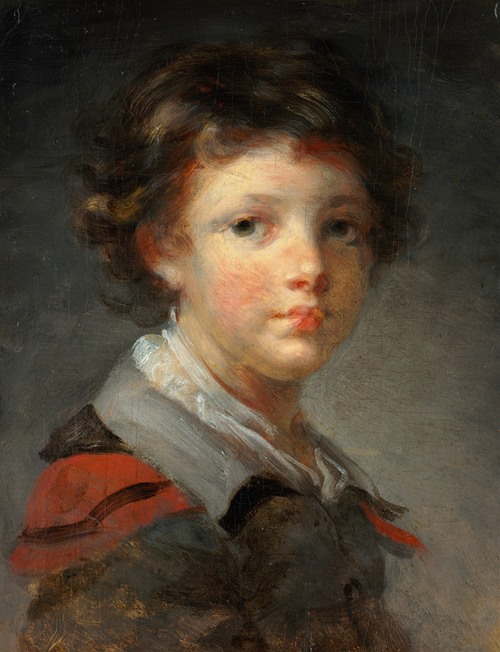 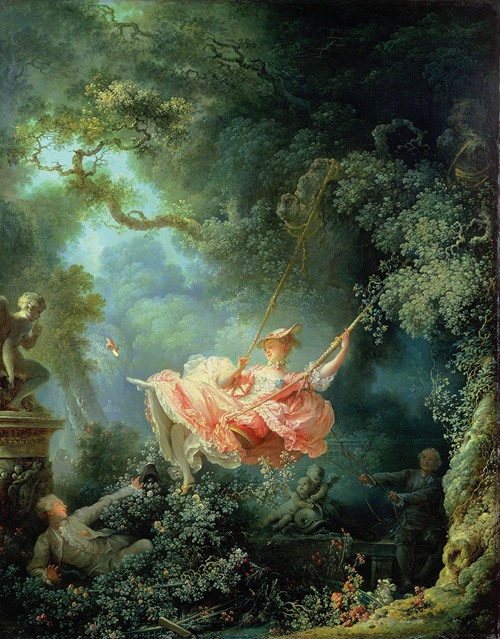 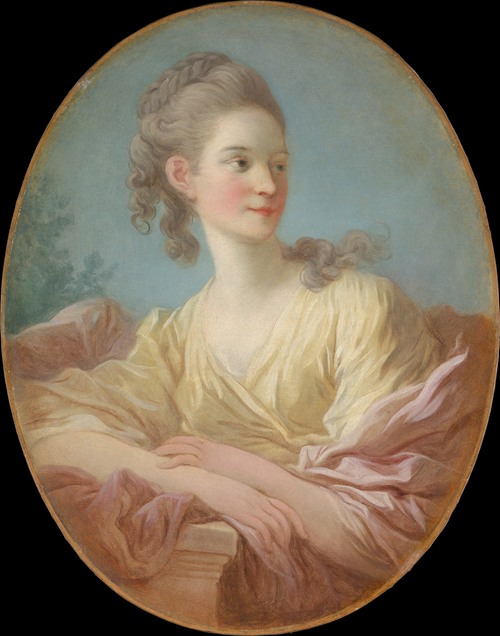 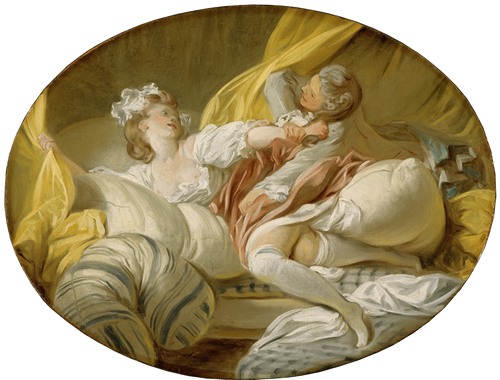 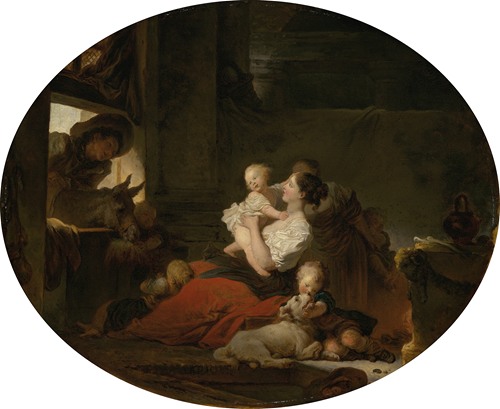 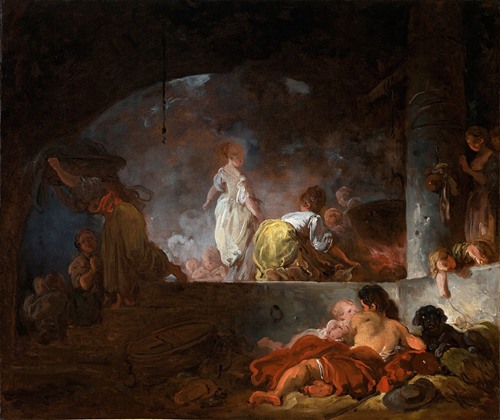 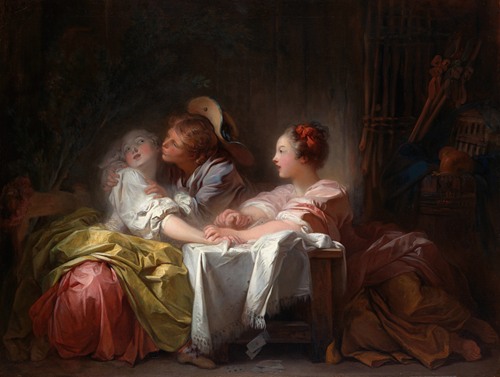 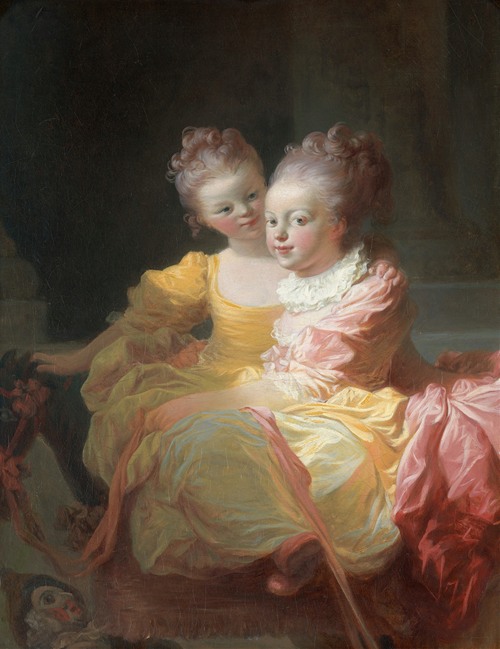 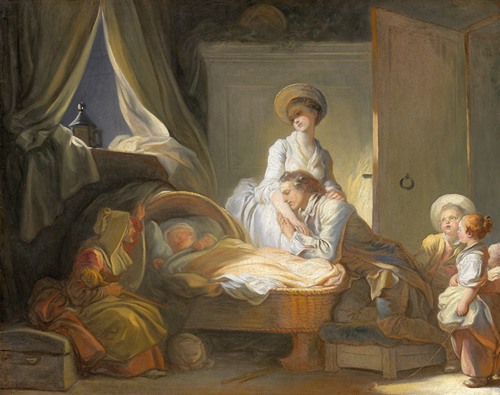 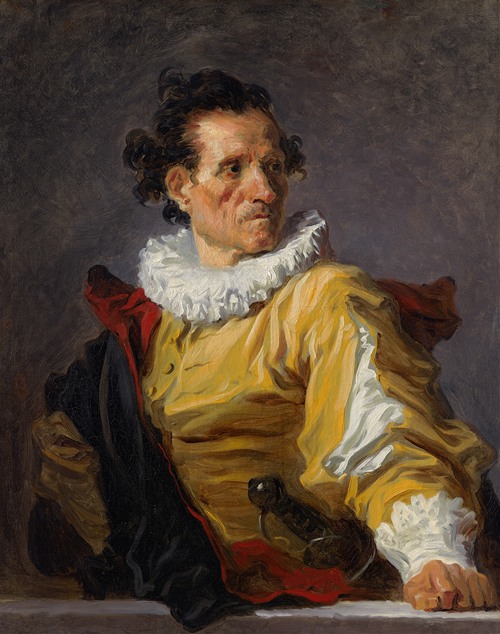 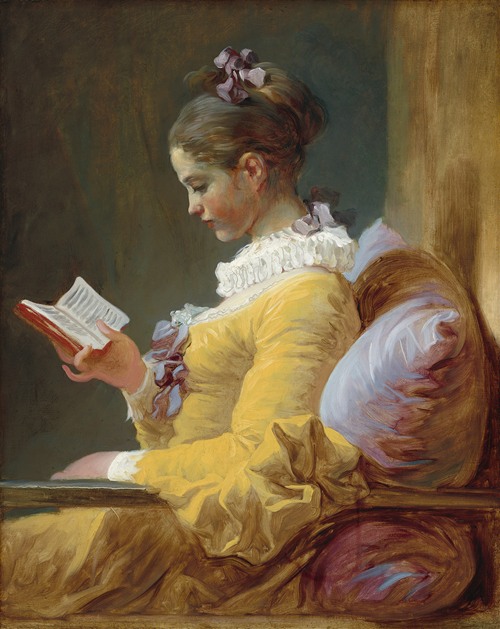 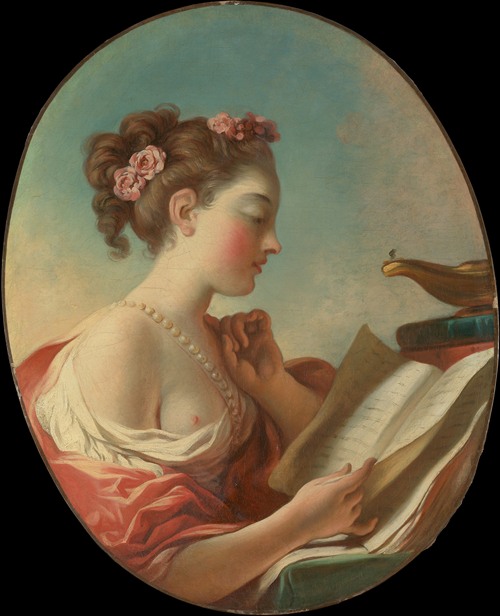 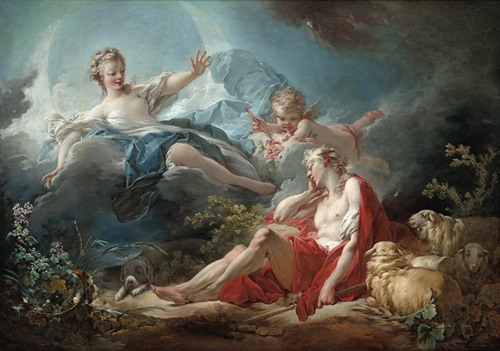 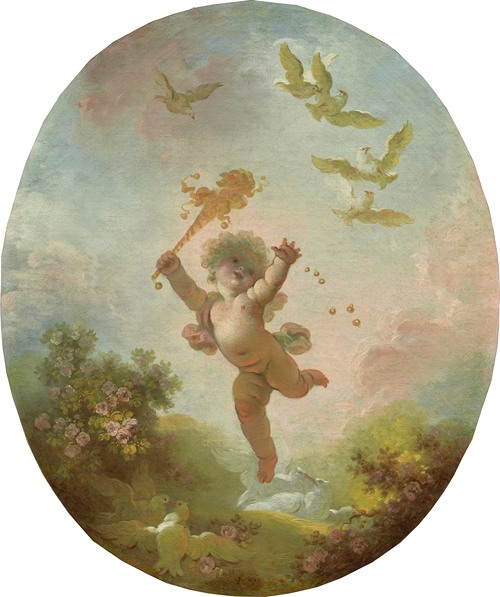 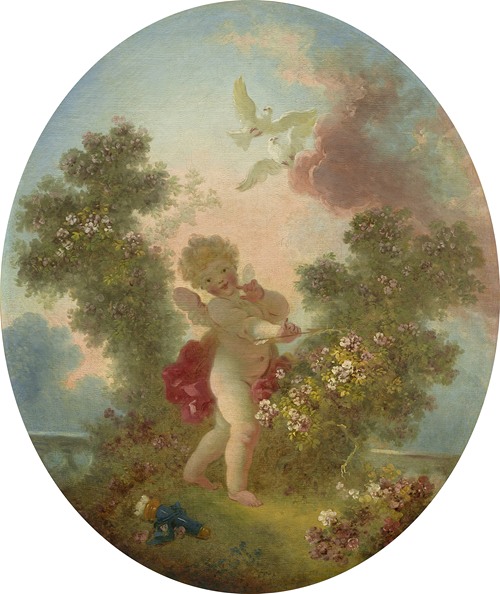 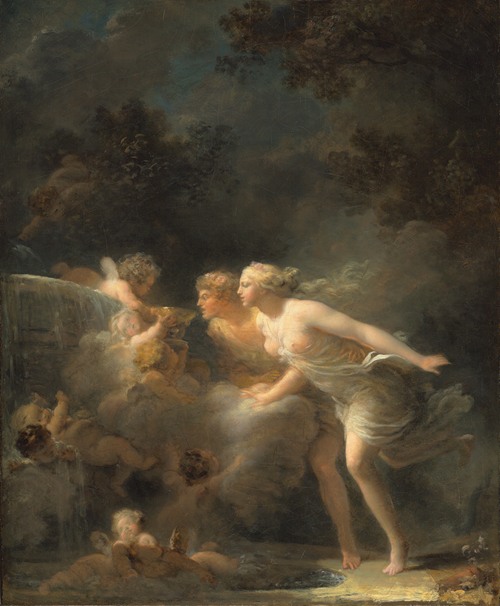 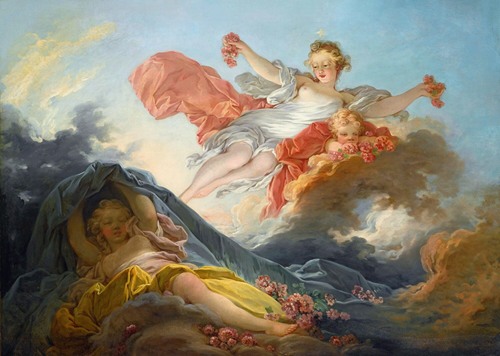 The Goddess Aurora triumphing Over Night 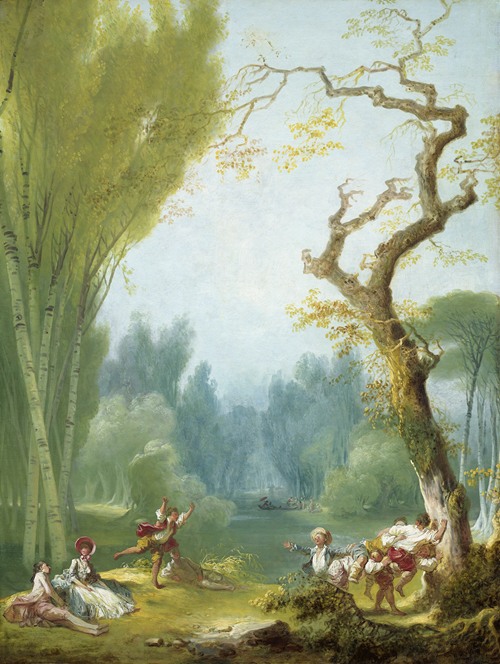 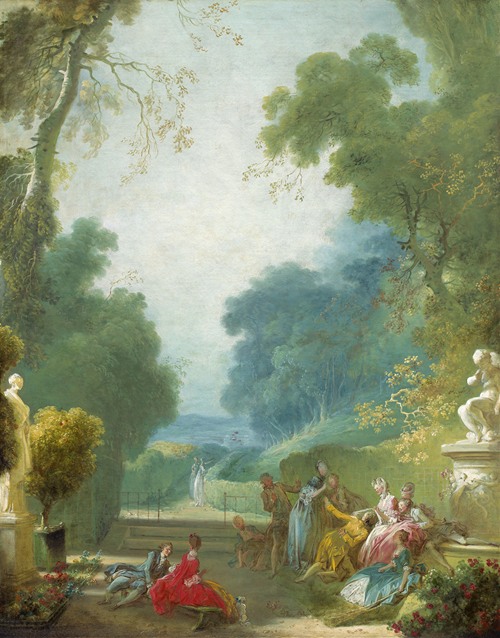 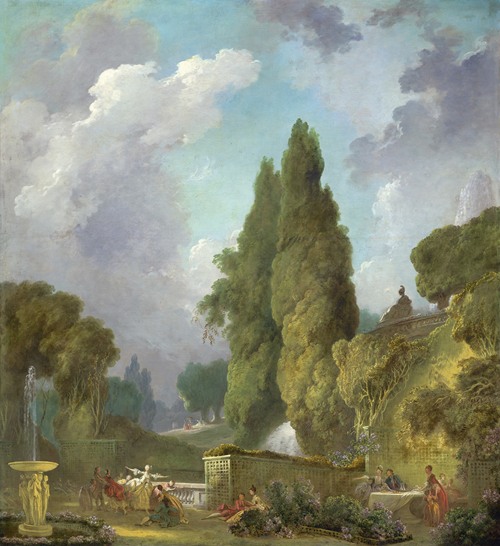 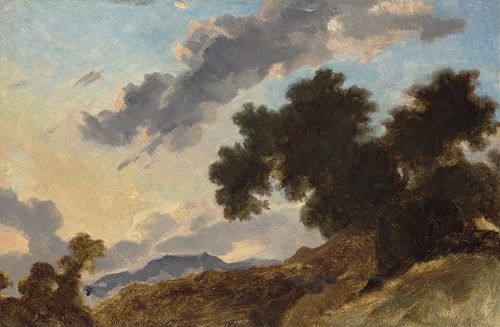 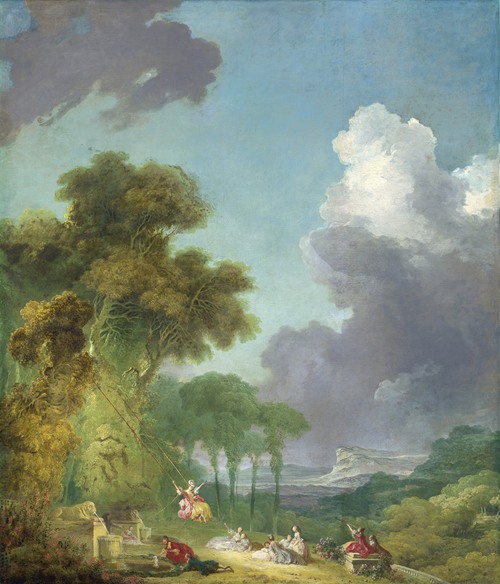 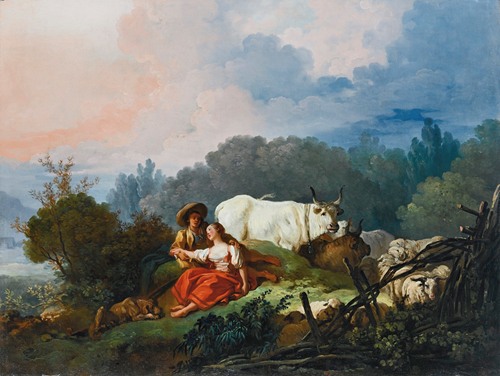 Pastoral Landscape With A Shepherd And Shepherdess At Rest 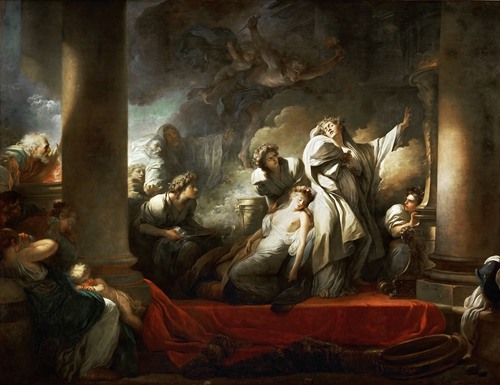 Coresus Sacrificing Himself To Save Callirhoe (1765) 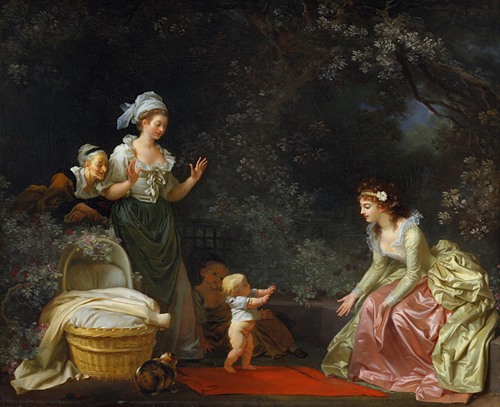 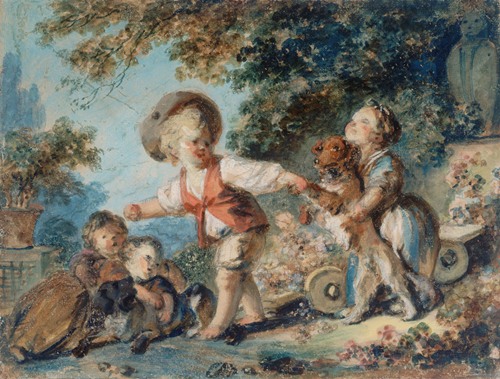 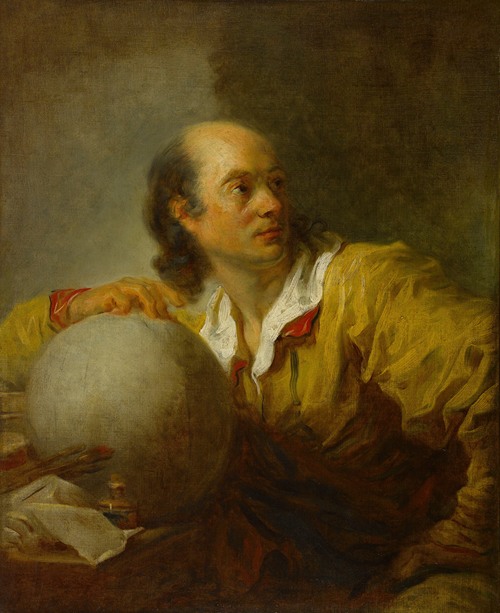