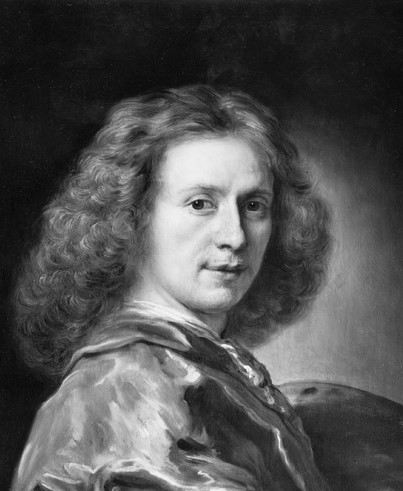 Few details about Voet's early life, training and career have been preserved. Voet was born in Antwerp as the son of the painter Elias Voet. He was one of the fifteen children; his older brother Carlo moved to Amsterdam and married in 1661 a daughter of the wealthy Joan Coymans and Sophia Trip. Jacob left his native Antwerp and travelled to Rome where he resided from 1663 to 1680. Voet became a member of the Bentvueghels, an association of mainly Dutch and Flemish artists active in Rome. Voet drew a picture in charcoal of all the members of the Bentvueghels on the white-washed wall of an inn in Rome that was a popular meeting place of this group. The picture was treasured enough to be spared whenever the walls were repainted.

In Rome Voet's skills as a portrait painter were much in demand at the Papal court and by the Roman aristocracy, including the prominent Colonna and Odescalchi families. He was patronised by Christina, Queen of Sweden, who was then resident in Rome. He painted her portrait as well as that of her friend, Cardinal Azzolino. Englishmen and other Europeans visiting Rome on their Grand Tour also commissioned portraits from Voet.

In 1671–1672 Voet received a commission from Cardinal Chigi to paint portraits of young woman who were prominent in Roman society. He created a first series of 37 portraits of the most enchanting women of Rome ('Galleria delle Belle') between 1672 and 1678 for Cardinal Chigi's dining room in his palace in Ariccia (in the Alban hills outside Rome). He later copied and even enlarged the series for other Roman and Italian noble families. This started a rage for portraits of young women in Rome and abroad.

In Rome Voet lived with the painter-engraver Cornelis Bloemaert. He was banned from the city by Pope Innocent XI who was scandalized by Voet's portraits of women portrayed with unseemly décolleté. He left Rome and is recorded in Milan in 1680. He was in Florence in 1681 where he worked for the Medici family. Subsequently, he resided in Turin from 1682 to 1684. He returned to Antwerp in 1684. According to the 18th century biographer Arnold Houbraken, Voet set out on his return journey to Antwerp from Turin together with the Dutch painter Jan van Bunnik, whom he had already met in Rome in the company of Cornelis Bloemaert. From Turin they set out for Lyons, where they met the painters Adriaen van der Cabel, Pieter van Bloemen, and Gillis Wenix. They then started out for Paris in the company of a third painter, Jacob van Bunnik who was Jan van Bunnik's brother.

Voet was likely back in Antwerp in 1684. He left his hometown for Paris at some time between 1684 and 1686, was appointed as court painter and died there in 1689, living on Quai de Guénégaud. In Paris he became portrait painter to political and military personalities such as Michel Le Tellier, François-Michel le Tellier and Marquis of Humières. Jacques d'Agar was probably his pupil.

Portrait of a man wearing a wig