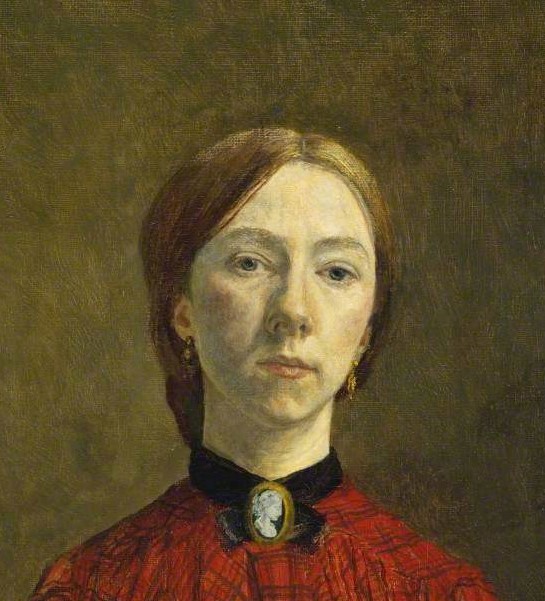 Gwendolen Mary John was a Welsh artist who worked in France for most of her career. Her paintings, mainly portraits of anonymous female sitters, are rendered in a range of closely related tones. Although she was overshadowed during her lifetime by her brother Augustus John and her lover Auguste Rodin, her reputation has grown steadily since her death.

Gwen John was born in Haverfordwest, Wales, the second of four children of Edwin William John and his wife Augusta (née Smith). Gwen's elder brother was Thornton John; her younger siblings were Augustus and Winifred. Edwin John was a solicitor whose dour temperament cast a chill over his family, and Augusta was often absent from the children owing to ill health, leaving her two sisters—stern Salvationists—to take her place in the household. Augusta was an amateur watercolourist, and both parents encouraged the children's interest in literature and art. Her mother died when Gwen was eight years of age. Regarding her mother's death and the loss of her influence, her brother, Augustus, later wrote: "My mother would no doubt have been helpful, but she died when I was a small child, after, I fear, a very tearful existence."

Following their mother’s premature death in 1884, the family moved to Tenby in Pembrokeshire, Wales, where the early education of Gwen and her sister Winifred was provided by governesses. The siblings often went to the coast of Tenby to sketch. John said that she would make "rapid drawings of beached gulls, shells and fish on stray pieces of paper, or sometimes in the frontispiece of the book she was reading." Although she painted and drew from an early age, Gwen John's earliest surviving work dates from her nineteenth year.

From 1895 to 1898, she studied at the Slade School of Art, where the program was modeled after the French atelier method (various levels of student working under a master artist). It was the only art school in the United Kingdom that allowed female students, although there was generally no mixing of men and women on the grounds, in classes, or in corridors. Like her younger brother, Augustus, who had begun his studies there in 1894, she studied figure drawing under Henry Tonks. During this period, she and Augustus shared living quarters, and further reduced their expenses by subsisting on a diet of nuts and fruit. She developed a close relationship with the woman who would become her brother's wife, Ida Nettleship. At this time, she also had a relationship with another of her brother's friends, Arthur Ambrose McEvoy, which turned out to be an unhappy one. Good friends also included Ursula Tyrwhitt and Gwen Salmond. John won the Melvill Nettleship Prize for Figure Composition in her final year at Slade.

Slade students were encouraged to copy the works of old masters in London museums. John's early paintings such as Portrait of Mrs. Atkinson, Young Woman with a Violin, and Interior with Figures are intimist works painted in a traditional style characterised by subdued colour and transparent glazes.

Even as a student, Augustus's brilliant draughtsmanship and personal glamour made him a celebrity, and stood in contrast to Gwen's quieter gifts and reticent demeanour. Augustus greatly admired his sister's work but believed she neglected her health, and urged her to take a "more athletic attitude to life". She refused his advice, and demonstrated throughout her life a marked disregard for her physical well-being.

In 1898 she made her first visit to Paris with two friends from the Slade, and while there she studied under James McNeill Whistler at his school, Académie Carmen. She returned to London in 1899, and exhibited her work for the first time in 1900, at the New English Art Club (NEAC). Her material circumstances were poor, and in 1900–01 she lived as a squatter in a derelict building.

In late 1903, she travelled to France with her friend Dorelia McNeill (who would later become Augustus John's second wife and whose daughter, Vivien John would also become an artist). Upon landing in Bordeaux, they set off on a walking tour with their art equipment in hand, intending to reach Rome. Sleeping in fields and living on money earned along the way by selling portrait sketches, they made it as far as Toulouse. In 1904 the two went to Paris, where John found work as an artist's model, mostly for women artists. In that same year, she began modelling for the sculptor Auguste Rodin, and became his lover after being introduced by Hilda Flodin. Her devotion to the much older Rodin, who was the most famous artist of his time, continued unabated for the next ten years, as documented in her thousands of fervent letters to him. John was given to fierce attachments to both men and women that were sometimes disturbing to them, and Rodin, despite his genuine feeling for her, eventually resorted to the use of concièrges and secretaries to keep her at a distance.

During her years in Paris she met many of the leading artistic personalities of her time, including Matisse, Picasso, Brâncuși, and Rainer Maria Rilke, but the new developments in the art of her time had little effect on her, and she worked in solitude. In 1910 she found living quarters in Meudon, a suburb of Paris where she would remain for the rest of her life. As her affair with Rodin drew to a close, John sought comfort in Catholicism, and around 1913 she was received into the Church. Her notebooks of the period include meditations and prayers; she wrote of her desire to be "God's little artist" and to "become a saint." In an often-quoted letter of ca. 1912, she wrote: "As to whether I have anything worth expressing that is apart from the question. I may never have anything to express, except this desire for a more interior life".

She stopped exhibiting at the NEAC in 1911, but gained an important patron in John Quinn, an American art collector who, from 1910 until his death in 1924, purchased the majority of the works that Gwen John sold. Quinn's support freed John from having to work as a model, and enabled her to devote herself to her work. Although she participated in exhibitions fairly regularly, her perfectionism produced in her a marked ambivalence toward exhibiting. She wrote in 1911: "I paint a good deal, but I don't often get a picture done—that requires, for me, a very long time of a quiet mind, and never to think of exhibitions." In 1913, one of her paintings was included in the seminal Armory Show in New York, which Quinn assisted in organising.

Her attitude toward her work was both self-effacing and confident. After viewing an exhibition of watercolours by Cézanne she remarked: "These are very good, but I prefer my own."

About 1913, as an obligation to the Dominican Sisters of Charity at Meudon, she began a series of painted portraits of Mère Marie Poussepin (1653–1744), the founder of their order. These paintings, based on a prayer card, established a format—the female figure in three-quarter length seated pose—which became characteristic of her mature style. She painted numerous variants on such subjects as Young Woman in a Spotted Blue Dress, Girl Holding a Cat, and The Convalescent. The identities of most of her models are unknown.

In Meudon she lived in solitude, except for her cats. In an undated letter she wrote, "I should like to go and live somewhere where I met nobody I know till I am so strong that people and things could not effect me beyond reason." She wished also to avoid family ties ("I think the family has had its day. We don't go to Heaven in families now but one by one") and her decision to live in France after 1903 may have been the result of her desire to escape the overpowering personality of her famous brother, although, according to art historian David Fraser Jenkins, "there were few occasions when she did anything against her will, and she was the more ruthless and dominating of the two."

John exhibited in Paris for the first time in 1919 at the Salon d'Automne, and exhibited regularly until the mid-1920s, after which time she became increasingly reclusive and painted less. She had only one solo exhibition in her lifetime, at the New Chenil Galleries in London in 1926. In that same year she purchased a bungalow in Meudon. In December 1926, distraught after the death of her old friend Rilke, she met and sought religious guidance from her neighbor, the neo-Thomist philosopher Jacques Maritain. She also met Maritain's sister-in-law, Véra Oumançoff, with whom she formed her last romantic relationship, which lasted until 1930.

John's last dated work is a drawing of 20 March 1933, and no evidence suggests that she drew or painted during the remainder of her life. On 10 September 1939, she wrote her will and then travelled to Dieppe, where she collapsed and was hospitalized. She died there on 18 September 1939 and was buried in Janval Cemetery. According to Paul Johnson in Art: A New History, 'she appears to have starved to death' (p. 675).