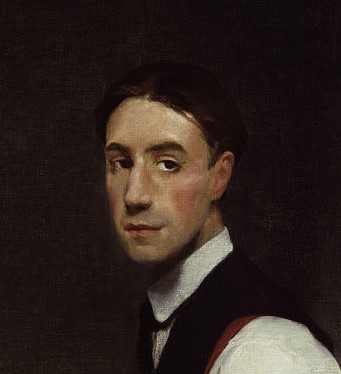 Glyn Warren Philpot was an English painter and sculptor, best known for his portraits of contemporary figures such as Siegfried Sassoon and Vladimir Rosing.

Philpot was born in Clapham, London, but the family moved to Herne in Kent shortly afterwards. Philpot grew up to be both a gay man, and a practising Christian who converted to Roman Catholicism.

Philpot studied at the Lambeth School of Art (now known as City and Guilds of London Art School) in 1900 where he was taught by Philip Connard, and at the Académie Julian in Paris.

Philpot first exhibited at the Royal Academy in 1904 and was elected to that establishment in 1923. He was a member of the International Society from 1913 and in that year he was awarded the gold medal at the Carnegie Institute, Pittsburgh.

He enjoyed a "comfortable income" from portraiture. He was reported as doing ten or twelve commissions a year, charging between £600 and £3,000 a time. This enabled him to afford to travel to France, Italy, America and North Africa and continue to paint less commercially successful subject pictures. Following the Symbolist tradition his subject pictures reflected more personal concerns and contradictions: Philpot converted to Catholicism, yet his interest in the male nude and portraits of young men – thought to be friends, models and lovers – show his gradual acceptance and expression of his own homosexuality. Some of these later works were considered controversial because of their homosexual imagery. Two pieces in particular – Guardian of the Flame and The Great Pan (1930) were withdrawn from the Royal Academy. This led to a loss of popularity which caused him financial hardship.

Philpot was in a relationship with painter Vivian Forbes from 1923–1935. A loving cup held by Brighton Museum serves as a testament to their relationship. Philpot died from a stroke in December 1937; his funeral took place on 22 December 1937. Forbes committed suicide the following day. He is buried in a pink granite tomb in St Peter's Churchyard, Petersham, in west London.

Portrait Of A Female Nude

Portrait Of A Mother And Children